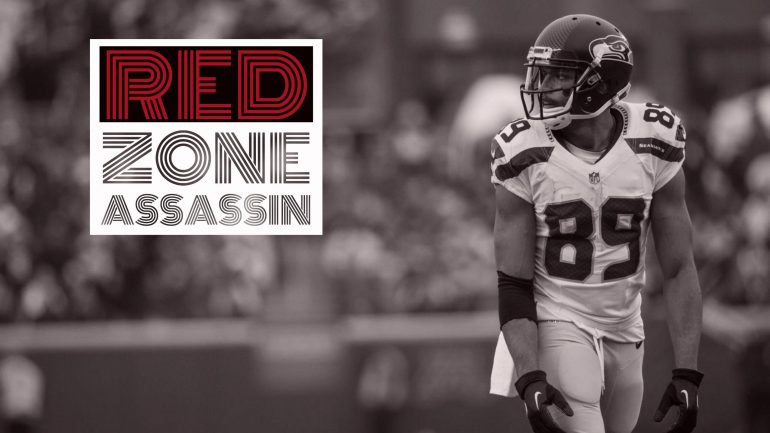 By now you have seen the highlight of Doug Baldwin robbing Rams cornerback Troy Hill of his dignity Thursday night on his way to wide open touchdown. Hill got caught anticipating a slant route and looking into the backfield, contributing to Baldwin getting roughly five yards of separation from the 1-yard line. Uncommon, to say the least. Baldwin reacted in a strange way after the play, running straight toward his own sideline screaming as if to make a point to his teammates and coaching staff that he deserves more chances to make plays in the red zone. After doing a little research, he appears to have a point.

Then I calculated their catch rate (receptions / targets). That is a standard metric. Next, I added a new metric that I am calling their red zone touchdown rate (touchdowns / targets). The combination of these two metrics goes a long way toward indicating which players are making the most of their chances in the red zone. Here are the results, sorted by red zone touchdown rate:

A few things jump out when absorbing these numbers. First, who the heck is Donte Moncrief? Admittedly, I had to look him up. He is a third year receiver for the Colts, who has been limited to only eight games this year due to injury. He clearly has developed some chemistry with Andrew Luck after matching his career-high in touchdowns in only half of a season.

Second, Baldwin is nearly perfect in the red zone this year. He has caught 11 of the 12 passes thrown his way. Considering how many things can cause a target to go uncaught in the red zone (e.g., throwaways, tight quarters, etc.), having only one incompletion all year is eye opening. That he has converted half those attempts into touchdowns shows these are not just the “play-before-the-play” to set up others for the score. He is delivering points when given the chance.

Third, Dez Bryant checking in at only 10 red zone targets is surprising. The best guess there is the Cowboys have preferred to rely on their line and running game to get in the end zone. Bryant continues to be a highly efficient red zone target when given the chance.

Most of us think of big, tall receivers as the best options in the red zone. They don’t have to create space. They can just leap over defenders to make plays. The list above mostly backs up that strategy as only two of the top eighteen red zone targets are under six feet tall. One is Theo Riddick, a running back, which is quite different. The other is Baldwin.

Unable to rely on height to gain an advantage, Baldwin must get open the old fashioned way. His release and route running make him difficult to cover in short quarters. Everything happens quickly in the red zone, so even one false step by a defender can give the receiver the advantage he needs without time to recover. Ask Troy Hill.

As efficient as Baldwin has been in the red zone, Jermaine Kearse has been the opposite. He has just one fewer red zone targets (11) than Baldwin, and has caught a total of zero touchdowns. Not only that, but he has yet to make a single catch in the red zone. How coaches can justify the continued splitting of red zone targets between Baldwin and Kearse is beyond me. Perhaps, we have seen the turning of the tide as Tyler Lockett has taken over for Kearse as the starting split end.

Lockett has yet to catch a red zone touchdown this year, but at least he has a 60% catch rate. More importantly, there should be a shift toward Baldwin in those moments.

More than a one year phenomenon

Those who question coming to any conclusions based on less than a full season of data should take a look at the same list, with all of last seasons games added in. That makes 30 games in the case of Baldwin. With the increase of games, I also increased the minimum targets to 25 to keep the list more manageable. 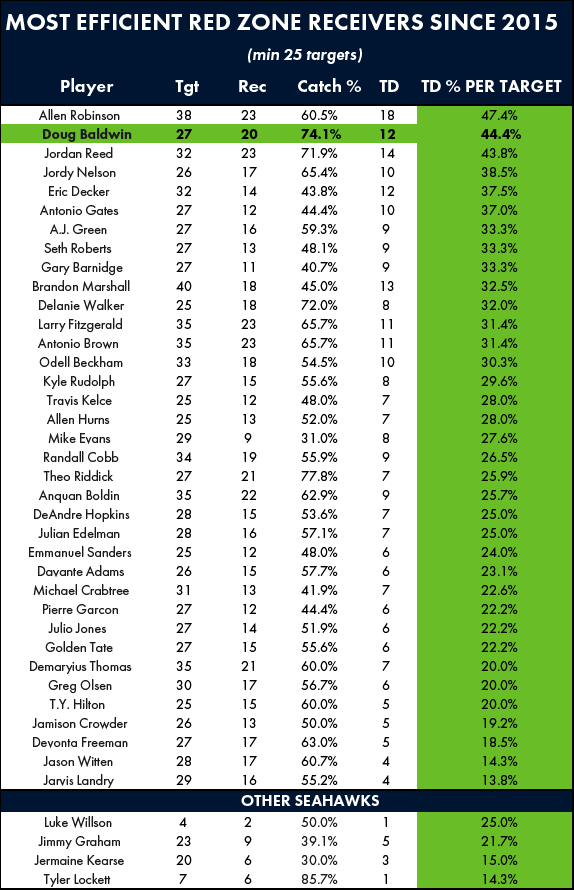 Baldwin once again stands tall as the second most efficient red zone target. Only Allen Robinson, Jordan Reed, and Brandon Marshall have had more red zone touchdown receptions in the past 30 games and each of those players have at least five more targets than Baldwin.

Give him five more targets to match Reed, and Baldwin’s efficiency ratings suggest he would add at least two more touchdowns and vault into second place in red zone touchdowns, tied with Reed.

Graham did not meet the minimum 25 target requirement. In part, due to his injury last year. His 21.7% touchdown rate is acceptable, if not great. Kearse has three touchdowns in nine red zone targets last year, indicating that there is at least some hope for him to regain a better red zone resume down the line.

Pete Carroll has proudly preached his program relies on competition to determine who gets the opportunities on the field. There is no guarantee that Baldwin would be able to maintain this level of efficiency should his red zone targets increase, but there is little doubt that he has earned the chance to see if he can help what has been a troubled Seahawks red zone offense.