We are through another quarter of the season and the numbers tell an interesting story about how the team has changed over the past four games. If you want to see how the team is doing this year halfway through the season compared to last year at the same time, you can check out the 2014 mid-season progress report. You will find that the much-maligned Seahawks offense holds up pretty well except for a few key areas. 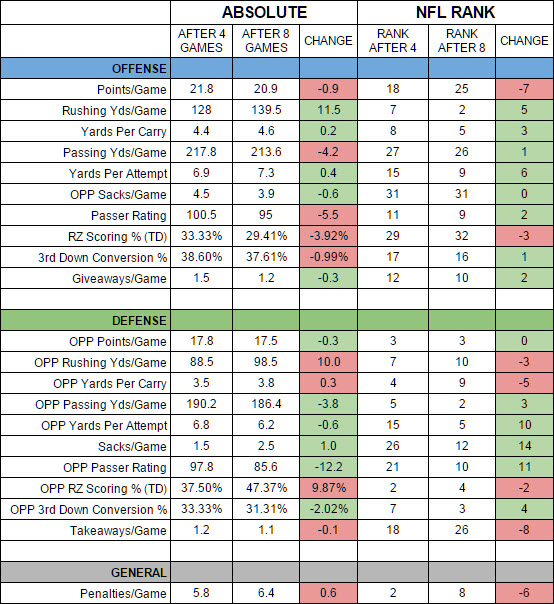 Scoring is down from the first four games, and it was not that high to begin with. The team was averaging 25.2 ppg at this time last season. That difference comes down to two things: red zone touchdown percentage and red zone attempts. The Seahawks not only rank dead last in red zone percentage, but also in red zone attempts per game.
Last year’s team was not exactly great in the red zone either. They ranked 25th in the NFL in touchdown percentage at this point in the season, but that percentage was 51.6%. If this year’s Seahawks team could just get back to that level, even if they did not get any additional attempts, their scoring average would increase 2 ppg to 22.9.

The Seahawks get 2.1 red zone attempts per game this year compared to 3.7 last year. If they could even split the difference over the last half of the season and get to 2.9 attempts per game, while also getting to that mediocre 51.6% conversion percentage, they would add four points per game to their scoring average (24.4 ppg).

There is no doubt that this is the area where the team has the team has the most room to improve. All the reasons for optimism in the red zone coming into the season still apply. Jimmy Graham and Marshawn Lynch have been the greatest red zone threats in the NFL the past four seasons. Finding a way to unlock that talent could very well be the difference between disappointment and glory.

The results may not be spectacular, but the offense made strides in many areas over the past four games. Rushing yards are up significantly, as are yards per carry. It is worth noting that, ranking relative to other NFL teams, has gone up for every measure besides red zone percentage, scoring, and sacks per game. They are far from a powerhouse, but progress is progress.
The chemistry between Russell Wilson and Jimmy Graham was the best it has been all year in the last game against Dallas. The pass protection was strong, even without their starting left tackle. The receivers have been great all year when given the chance to make a play.
It still would be nice to find a way to incorporate Chris Matthews more into the game plan. He terrorized the Patriots secondary last year simply by being tall. There has yet to be a single deep throw to Matthews this year, and may not have been a single red zone throw to him either. It is hard to make an impact without opportunity.

Paul Richardson’s return could provide a lift. More opportunities for Chris Matthews would be nice to see as well.

Paul Richardson will undoubtedly start to mix in now with the terrible injury to Ricardo Lockette. No disrespect to Lockette, but Richardson is a better receiver and the offense should be at least a little stronger with Richardson getting some of Lockette’s snaps.

It is ironic that the Seahawks red zone offense is so much worse at this time than it was at this point last year while the red zone defense is so much better. Seattle ranked 26th in the NFL in red zone defense halfway through the 2014 season, giving up touchdown on a whopping 65.2% of opponent red zone possessions. This years team is ranked 4th in the NFL, and that is even after a 10% slide from where they were after four games.
This is a huge reason why the Seahawks are allowing 17.5 ppg halfway through this year when they were allowing 21.8 ppg at the same time last year. Great quarterbacks will expose the slightest flaw in red zone defense, and we saw that when Cary Williams was exploited in Cincinnati. This next game against Arizona will represent a massive test as they are among the league leaders in red zone chances and red zone conversions. Seattle was able to hold Aaron Rodgers to a 1-3 red zone performance in week two, and will need to repeat that if they want to knock off a very talented Cardinals team.

What sticks out to many people about the Seahawks defense this year are the multiple fourth quarter collapses. That is fair. Be careful not the throw the baby out with the bathwater. Cam Newton had a 15.5 passer rating through three quarters. Andy Dalton had a 75.6 passer rating through three quarters. Aaron Rodgers had just 150 yards passing after three quarters. Yes they torched Seattle in the fourth, but they also really struggled to find success for 75% of those games. It feels a lot more like Seattle needed to make some adjustments than that any good quarterback is going to tear them apart.

The “good quarterbacks destroy Seattle” narrative is misleading at best, and ignorant at worst

Nick Foles had a terrific game against Seattle in the opener. Was that because he is a great quarterback? Of course not. Would you expect the Seahawks defense to play much better against him now? Absolutely. This is a case where the details matter and the big picture is misleading. The Seahawks have faced three undefeated teams out of their eight games, two of which were on the road. They were in great position to win all three of those games, and failed to finish each time. Pessimists will look at it and see that Seattle can only beat bad teams with bad quarterbacks. I see a defense that is getting closer and closer to the well coordinated machine they have been in past seasons.

Cautionary notes on the defense

Bobby Wagner has been MIA most of this year. I do not know how much that has to do with his performance and how much it may be related to how his defensive tackles are occupying blockers in front of him. Either way, the team needs him to be the playmaker he has been in past years.
The slide in run defense overall is something to watch. Pete Carroll’s teams in Seattle have a history of starting strong in run defense and then eroding a bit over time. They face a very good run team in Arizona next and another good one in Minnesota soon after. This team cannot afford to spring a leak in the run game.
The lack of takeaways can be a glass half full or half empty situation. The pass rush is doing great and the pass defense is getting tighter, so the lack of takeaways could mean Seattle is due for a breakout second half in creating turnovers. Or, it could just mean this team is not making the plays it has in the past. Turnovers are most often related to pass pressure, so I tend to think this will start to turn the Seahawks way.