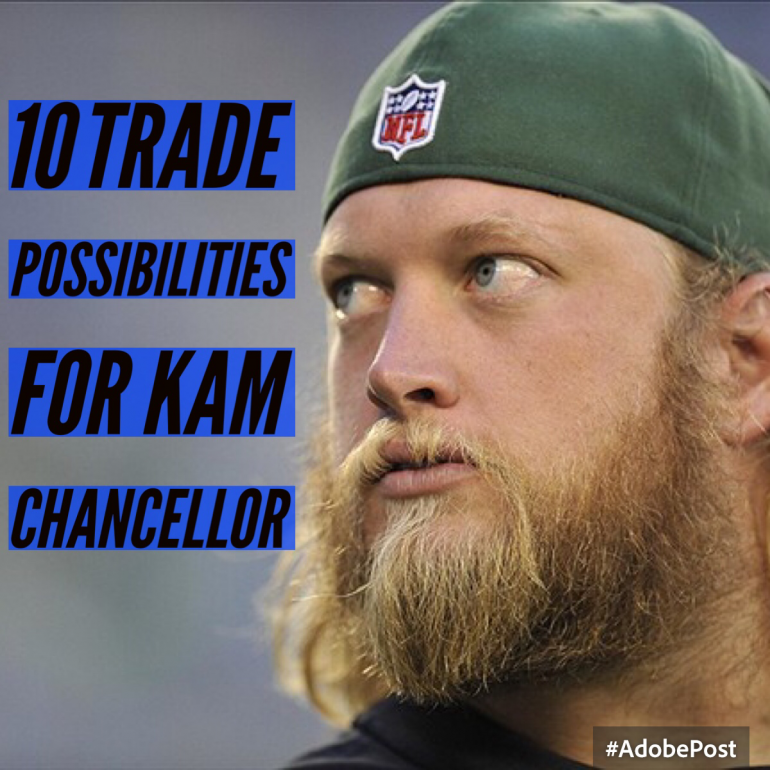 Kam Chancellor is a three-time Pro Bowl selection (including this year), and two-time pick for 2nd Team All-Pro. He is one of the most intimidating players in the NFL, and a leader on one of history’s best defenses. What does a player like that fetch in a trade? Let’s explore a few possibilities.

Chancellor will turn 28 in April, and is coming off a year in which he played his fewest games (11). That was, in part, due to his two-game holdout. The other issue, a pelvic injury, should have no long-term effects. He should enter next season healthy and in his prime. Safeties can be productive well into their 30s.
Reggie Nelson (32) and Charles Woodson (39) were 2nd Team All-Pro selections this year. Eric Weddle (31) was a 1st Team selection last year. Roman Harper (33) continues to play an important role on the Panthers Super Bowl defense. It is reasonable to expect Chancellor to be a valuable starter for 3-4 more years, and perhaps longer.Most trades in the NFL are either straight draft pick for draft pick deals, or involve developmental prospects and backups. It is far more rare for quality NFL players to be traded to another team. I went through and scrubbed the NFL transaction list over the past five years and found the best comparisons to Chancellor. Ages of the players at the time of the trade are listed in parentheses.

I did not include deals like LeSean McCoy for Kiko Alonso because those were two 26 or younger players that do not seem to warrant a comparison here. Notice that draft picks were the only compensation in 8 of the 12 trades. However, the two most recent deals that netted a draft pick earlier than the fourth round, included a player coming back the other way.The Goldson deal can be thrown out since he was two years removed from a Pro Bowl or All-Pro, is three years older, and had an overloaded contract. The Ellerbe deal is an interesting one in that it is one of the few where a significantly younger player was brought back in return. That happened in the Logan Mankins deal as well. Mankins is more comparable than to Chancellor than Ellerbe is in terms of talent, but was four years older when the deal went down.

The closest deal I found to the Chancellor situation was the Jimmy Graham trade last year. An All-Pro level talent in his prime, with a few years left on a deal, was traded for another (lesser) starter. The perceived inequality in player value was made up for in swapping draft picks.

It seems like it will be tough to get fair value for Chancellor in a draft pick only deal. Seattle would likely be looking at a 4th round pick, maybe a 3rd if they were fortunate. That led me to scrub NFL rosters looking for possible player matches to make for a more even deal.

These scenarios are in no particular order. Factors taken into account included: player contracts, cap space considerations on both sides, talent levels, age, and team needs. Keep in mind that a Chancellor trade opens up $4.1M in cap space in 2016 and $7.125M in 2017 for the Seahawks.

1. New Orleans Saints G Jahri Evans (32) & 4rd round pick for Chancellor and a 7th round pick

The Saints had one of the worst defenses in history last year. Evans has been one of the league’s best guards, but is aging and has two more years on deal, just like Chancellor. The Saints are projected to be $8M over the cap next year, and are going to have to make some tough decisions. They would have to restructure Chancellor’s deal to provide some cap relief in the near term, but that might provide the chance for him to get the greater guaranteed money he has been seeking. New Orleans already has Jarius Byrd and Kenny Vaccaro at safety, and Byrd won’t be cut despite his poor play given the $11.4M dead money charge the Saints would incur. This move would be made with an eye on playing either Vaccaro or Chancellor at hybrid linebacker, akin to Deone Bucannon, Shaq Thompson, or Mark Barron.

The Jets center is a 7-time Pro Bowler and 3-time All Pro selection. He is getting older and has two years left on his deal that will count $8.6M against the cap in 2016 and $9.1M in 2017. Seattle would be taking a hit to their cap space by acquiring Mangold. That, plus the age disparity between the players, is why they would have to bundle a good draft pick as well. Keep in mind the Jets signed both Dion Bailey and Ronald Martin, who were safeties on the Seahawks training camp roster.

Washington had a nice run in 2015, but their defense is a mess. Chancellor would rank as their best defensive player, or very close to it. John Schneider’s close friend, Scot McCloughan is the GM in Washington, which always helps create opportunities for trades. The Redskins will clear over $16M in cap space when they cut Robert Griffin III, so they will have the ability to give Chancellor the money he wants. Lichtensteiger missed most of the season with a pinched nerve in his neck. He has played both guard and center.

Nobody outside of Seattle knows the value of Chancellor more than Dan Quinn. He knows his Falcons need toughness, and Chancellor brings that in spades. They drafted Coleman last year in the third round before knowing what they had in Devonta Freeman. The injury to Thomas Rawls, the impending retirement of Marshawn Lynch, and the unknowns about Christine Michael make running back an area the Seahawks will want to shore up. The expectation is they would do that via the draft, but Coleman is a player with NFL tape who is young, promising, and under club control for the next four years. I added a swap of 3rd round pick due to the gap in proven talent, but that could just as easily go the other way since the Falcons would be taking on a larger contract.

The Cowboys have some challenges with their cap, although they are starting to dig their way out. Their defense has been a problem, and Jerry Jones is always attracted to shiny objects. Their 2-time Pro Bowl center is entering the final year of his rookie contract. He will command big dollars in a new deal that the Cowboys may either not have or prefer to move to the defensive side of the ball. Seattle could acquire their center to team with Russell Wilson for the next five years. Dallas has Barry Church at safety, but he may be a cap casualty, as the Cowboys can save $4.3M by releasing him.

It is “win now” time for Gus Bradley and the Jags. He knows his defense has to take a big step forward to compliment his blooming offense, and Chancellor can be an instant leader. Beadles is an ideal trade chip as he will leave zero dead money and will clear cap space over the next three seasons that can be transferred directly to Chancellor. It is almost a one-for-one swap in terms of cap space, with Chancellor being the younger and better player. That would require the Jags to throw in a decent draft pick as well. The Seahawks get a good starting guard with three years left on his deal and the ability to cut him for cap room at any point along the way.

The Chargers are losing S Eric Weddle in free agency, and need some help on defense. Fluker is a mauler at 6’5″ and 339 lbs. He has played both left and right tackle, as well as guard. He is entering the final year of his rookie deal after being drafted with the 11th pick of the 2013 draft. The Chargers have a decision to make about picking up his fifth year option. Seattle could get a physical and talented player to add to their line, with club control for two seasons. His youth and level of play would mean Seattle would likely have to sweeten the deal beyond Chancellor.

The Raiders have $67M in cap room and have a chance to take a big step forward next year. Ken Norton Jr. is their defensive coordinator and would love to add Chancellor to his defense. This is a team that can afford to stretch a bit on draft compensation and take on Chancellor’s contract.

Peters is an 8-time Pro Bowler and 2-time first team All-Pro. He was a second team All-Pro in 2014, like Chancellor. He is considerably older than Chancellor and cost more as well. The Eagles could pair Malcolm Jenkins with Chancellor to form one of the best safety duos in the NFL, and spend the extra cap space on a young tackle to compliment Lane Johnson or look to the draft, who is expected to play left tackle next year. Seattle could slide Peters to the right side and get some veteran presence on the line. Philly would have to sweeten the pot with a good draft pick to make the cap hit worth it for Seattle.

The Vikings appear on the cusp of fielding a dominating defense. Pairing Chancellor with Harrison Smith would give them the best safety duo in the league without question. They have a pair of offensive tackles who have great pedigrees (Kalil was the 4th overall pick, Loadholt was a 2nd rounder), but have been inconsistent and are entering the final years of their deals. Kalil is a known quantity for Carroll as a USC grad, and could play either side of the line. He is due to make $11.1M this year, and would clear all of that space for the Vikings if they traded him. Seattle would likely acquire him with the idea of converting some of that into a signing bonus and possibly getting a talented left tackle before he hits the market and while his price tag is lower.