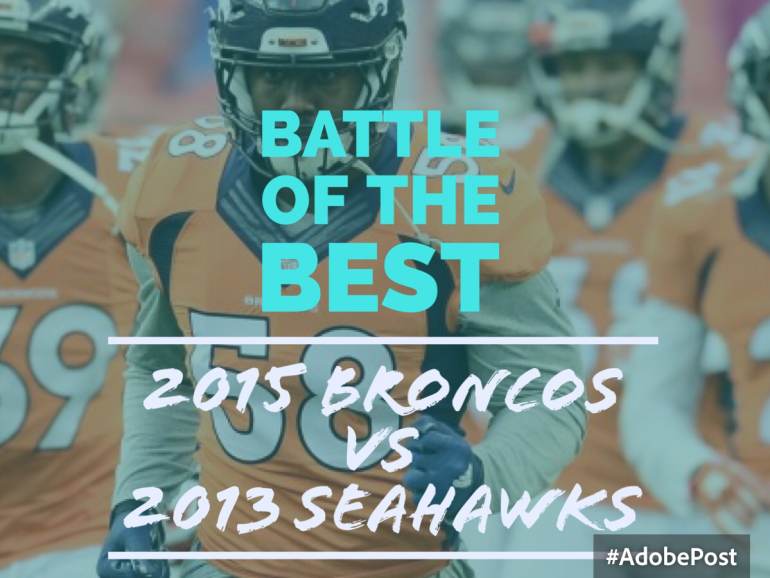 Battle of the Best: 2013 Seahawks Defense vs 2015 Broncos Defense

There has been an abundance of talk that this 2015 Denver Broncos defense is among the best in league history. They have been fantastic. Good enough, in fact, to be worth putting through the gauntlet to see how they stack up with a historically great defense that played in the Super Bowl just two years ago. One-by-one, I have examined the 2013 Seahawks versus titans of years gone. Apples-to-apples comparisons across generations and rule changes are difficult, but the method used here aims to do exactly that. It is not clear which defense will come out on top as we begin. The goal is to be objective and to enjoy the battle.

The Broncos were the first team other than the Seahawks to lead the NFL in yards allowed since 2011. Their star power is indisputable at every level. DeMarcus Ware and Von Miller are hellhounds on the outside. Malik Jackson, Shane Ray, Derek Wolfe and others add to pass rush arsenal few can match. Aqib Talib, T.J. Ward, Chris Harris Jr., and company make up one of the best secondaries in the game. They beat the Patriots twice, including a dominating performance in the AFC Championship.

All accomplishments are relative. That will be factored into the battle below. Scoring is down almost a point per game since 2013. Let’s see if other league trends impact the degree to which Denver’s defense should be considered special.

The Seahawks allowed nearly 10 fewer yards per game than the Broncos, and both teams finished atop the rankings, but the Seahawks take the lead in this category due to a better performance relative to what other league defenses were doing that year. Keep in mind, standard deviation looks at the spread of results across the league. It was 31.2 in 2013 for yards per game and 30.9 this year. That means that despite a greater spread of results in 2013, the Seahawks defense still stood out more than Denver’s in this category.

Some teams give up more yards per game simply because their offense leaves them on the field a lot. Looking at yards per play allows us to see an even better apples-to-apples look at two defenses. The Broncos have a dominant advantage in this category despite giving up the same yards per play as the 2013 Seahawks. This would indicate the Broncos are probably the more efficient defense in terms of surrendering yardage. This one is close but…

ROUND ONE WINNER: 2015 Broncos

This round starts with a big right hook from Seattle. The Seahawks gave up four fewer points per game despite playing in a year when teams were scoring more points than what the Broncos faced. They ranked tops in the NFL in this category, where the Broncos were just fourth. It comes as no surprise that the standard deviation differences is massive.

It gets a tiny bit closer when looking at efficiency per play, but not much. This one is clearcut.

Up to this point, we have been comparing the two defenses performance against league averages. But neither the Seahawks nor the Broncos played every opposing offense in the league. We need to get specific about which offenses they played, and how they did relative to the averages of those offenses.

Denver faced a bunch of top offenses. They did not do wonderfully against them. Their points allowed per game rose from their average of 18.5 to 23.1. The Seahawks dropped their average from 14.4 to 10.0 against the best offenses, including their dominant Super Bowl performance against the best offense in history. Denver will face one more Top 10 offense in the Super Bowl, which will impact these results, but not by much.It is also worth noting that one of the Top 10 offenses the Broncos faces was the Bengals without Andy Dalton, so it would be hard to consider that team near its best. They also faced the Steelers with an injured Ben Roethlisberger, and without Antonio Brown, Le’Veon Bell, or DeAngelo Williams.The Broncos faced more top-flight offenses, but their performance against them was underwhelming, whereas the Seahawks stepped up their game against the best.

The numbers flip here. The higher, the better. Seattle was significantly more adept at taking the ball away from their opponents than the Broncos. Denver was pretty close to a league average defense when it comes to creating turnovers. This round is not close.

This one is interesting. The Broncos offense was clearly worse in terms of scoring, but was similar in yards. The stat that jumps out here is the turnovers. The Broncos offense turned the ball over at an alarming rate, ranking 29th in the NFL. This put considerably more strain on their defense than what the 2013 Seahawks offense did. This helps to explain at least some of the difference in points allowed.

This is the only subjective part of the article. I look at these two defenses and see some similarities, but the Broncos biggest advantages were in yards per play and the fact that their offense put them in bad situations due to turnovers. Seattle dominated in points allowed, points per play, yards allowed, and turnovers forced, and by a pretty large margin in most.The 2015 Broncos are a great defense. They can help their legacy by finding some way to win this Super Bowl, but they will have to wait in line behind the 2013 Seahawks when awards are being given out for best defenses of all-time.