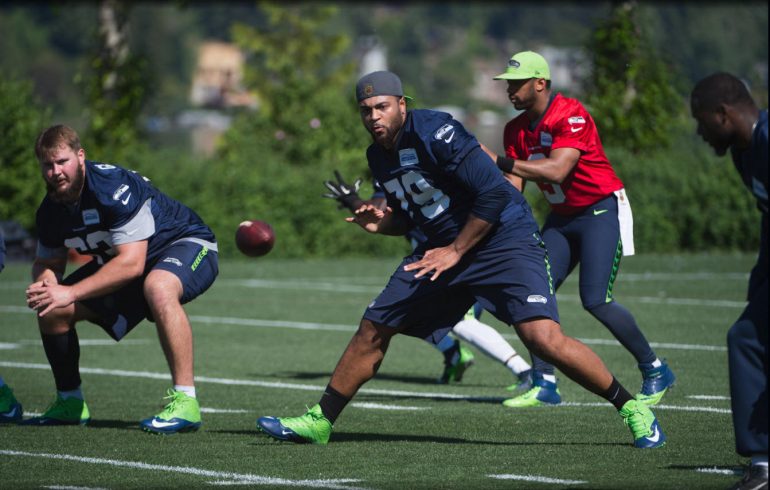 Pete Carroll and John Schneider usually like to keep things close to the vest, but neither man could contain his enthusiasm yesterday during separate radio interviews that revealed a plus-size plan to assemble a behemoth offensive lineup. It features Mark Glowinski at left guard instead of right, first round pick Germain Ifedi at right guard instead of right tackle, and could feature undrafted free agent defensive tackle Brandin Bryant at fullback. You thought Will Tukaufu at 280 pounds was a big fullback? Bryant is 290 pounds and benched 225 lbs thirty-eight times at his pro day. Welcome to Bully Club. The first rule of bully club is: beat the living crap out of the guy across from you.

This was predictable from the jump. It was just surprising how quickly the team revealed the plan. In past years, they would have allowed Ifedi to compete with J’Marcus Webb at right tackle and then slide Ifedi or Webb inside to guard once they had figured out their tackle situation. It is highly encouraging that they are starting their young players out with the position in mind that they are most likely to play so they can get maximum time at that position in mini-camp and training camp. Take a look at the second player on the comparable list with Ifedi:

I had Kelechi Osemele as the top-rated free agent for the Seahawks on my free agent big board. The Seahawks seem to agree with the value of a player who can be a powerful guard and swing out to tackle. Starting him at guard, unlike the way they handled things with James Carpenter, gives Ifedi the best chance to start with confidence. They can always slide him out to tackle in a year or two.

The team shared a picture of Glowinski playing left guard at a practice yesterday. It was a pretty good bet this would be the outcome once the team decided to start either Ifedi or Webb at right guard. Despite starting every game of his first two seasons in the NFL, Justin Britt has not secured his role. Glowinski is a player the Seahawks need to give every shot to enter the lineup, even if that means pushing Britt out. My bet is that Glowinski is a certain addition at left guard, as opposed to a competition with Britt. There will be others competing there, but it is really Glowinski’s job to lose.

He is listed at 310 lbs on the official roster, but having just talked to him a few weeks ago, it is hard to believe he is only 310 pounds. The term barrell-chested does not begin to describe the thickness of Glowinski. This is a very large young man.

This one made me a bit sad. I just wrote yesterday about my excitement at adding a player who eclipsed Robert Nkemdiche’s measurables into the competition along the interior defensive line. The news that the team wants to try him at fullback does not preclude his participation in the defensive line. Tukuafu played both sides and tight end last year. Once the minor disappointment faded, it was not hard to be intrigued by the idea of a 290 lb fullback crushing people in front of whoever the team lines up at running back. This is the kind of mad scientist plan that makes it so much fun to be a Seahawks fan, with guys like Carroll and Schneider concocting combinations never seen before.

The untold: Britt at center?

Neither Schneider nor Carroll mentioned this yesterday, but do not be shocked if we see Britt getting reps at center. Both Carroll and Tom Cable made a point to call out Britt’s experience at center multiple times last year when they switched him to guard. There was some consideration to put him there last year, but they chose to play him at guard instead. He had an up and down season, but mostly down, and was thoroughly dominated in the playoff game in Carolina.

Many fans are just done with him, and that is understandable. I see a hard-working third year player who has been a plus run blocker when he can get his hands on his opponent. He is a major liability in the passing game, but a move to center might help that. There are fewer one-on-one blocking assignments at center, and more combination blocks with guards. I would not go as far as saying Britt would be fine at center, but I can see why the team would want to explore the possibility.

Patrick Lewis did an admirable job there last year. The problem is he was simply overmatched physically against players like Aaron Donald, Michael Brockers and Star Lotulelei. The team has some question about whether he can be coached out of that, or if it is just a physical ceiling that the team may have to live with.

Britt is bigger and stronger than Lewis. The team is clearly looking for every way to get bigger and stronger, and at every position. Center will be no different. Should a veteran free agent that they like shake free of a roster in the next month or so, it would not be shocking to see them add another player to this mix, even after drafting Joey Hunt and knowing they like Kristjan Sokoli. Throw in Nick Vannett as your true blocking tight end, and the Seahawks will have added nearly 70 lbs to their blocking crew. Considering that I think Glowinski’s listed weight is below reality, this number very well could be even higher. Even if Lewis holds onto the center job, the team still will have added about 60 lbs to this lineup.

The right side will be strong, and should be effective in the running game, but both Ifedi and Webb come to Seattle with serious questions about their pass blocking abilities. Vannett, should he be anywhere close to Zach Miller, can help there to some extent.

The bigger concern is the lack of cohesion along the line. For the second straight year, no player would have any experience playing next to the linemen next to him. Continuity is the secret sauce that makes offensive lines outperform their talent level. Switching people around all the time keeps the roots from growing and taking hold. It is especially important in pass protection where teammates must trade off stunting linemen instinctively at times.

Seahawks brass is showing signs of appreciating that notion more this time around. Placing Ifedi inside and keeping him on the right side sets him up with the best chance for early success. Same goes for Rees Odhiambo on the left side at guard, even if he is unlikely to earn a starting role this year. Schneider and Carroll also spoke of wanting to get things figured out quickly. That is different. Carroll has consistently stressed letting things sort themselves out in competition during camp. While there will always be competition, the team would be better off making some early decisions about their offensive line and letting those guys get as many snaps as possible working together. If someone forces his way into the lineup along the way, so be it, but do not delay the tough decisions.