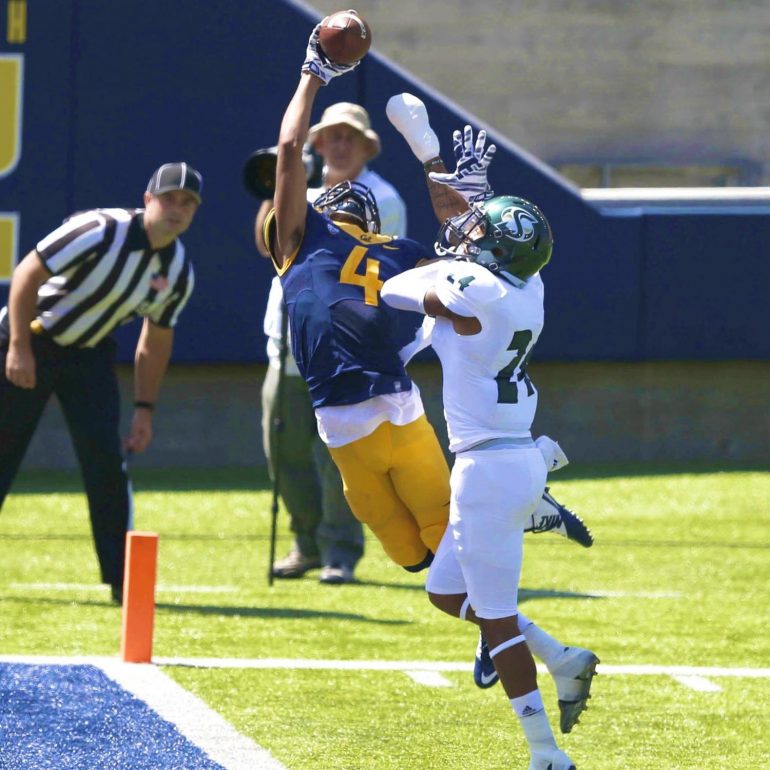 Few people were still paying attention to the draft when the Seahawks selected Cal receiver Kenny Lawler in the 7th round. The reactions after hearing about the selection were just as muted. Lawler is tall (6’2″), but not that tall. His is big (203 lbs), but not that big. His speed is below average by NFL standards. It does not appear to be an athletic recipe for success. Lawler, though, would not be the first to breakthrough in the NFL with his measurables. Another Cal receiver has already blazed that trail.

Lawler may not be the fastest receiver in the NFL, but he is faster than Chargers standout Keenan Allen, and is almost the exact same height and weight. Allen has found his way in the league by being a top-notch route runner with reliable hands.

It is worth noting that Laquon Treadwell (1st) and Rashard Higgins (5th) were drafted this year with similar physical makeup to Lawler. The slow 40 time can limit the types of roles a receiver can play, but it does not limit a player’s potential to contribute.

Lawler has some unique physical attributes that make him an intriguing late selection.

My, what big hands you have

John Schneider and Pete Carroll like to collect players with special qualities that they can accentuate. Lawler has massive 10.5″ hands and long 33″ arms.

That makes him a terrific option on third down and in the red zone. You do not need to get great separation if you have long enough arms to create a wide and tall catching radius for your quarterback to throw you into space. Lawler was designed to be a great fade route runner. Russell Wilson has not yet mastered that throw. Lawler could be part of the solution.

His competition is going to be fierce to even make the roster. Doug Baldwin, Jermaine Kearse, and Tyler Lockett are locks. Kevin Smith and Kasen Williams are trusted by the coaching staff, and are due for their chance to step forward. Douglas McNeil, assuming they keep him at receiver, was a standout at camp last year and stands at 6’3″ with deep speed. Jeff Fuller, a CFL signee, is 6’4″ and 218 pounds. Even Deshon Foxx merits a mention as a guy who just kept making plays last training camp and stuck around on practice squad most of last year.

Lawler has the moxie to throw himself into the middle of this frakus and make some noise. Landing a roster spot might be asking too much, but he could be the next redshirt receiver to spend a year seasoning on the practice squad.