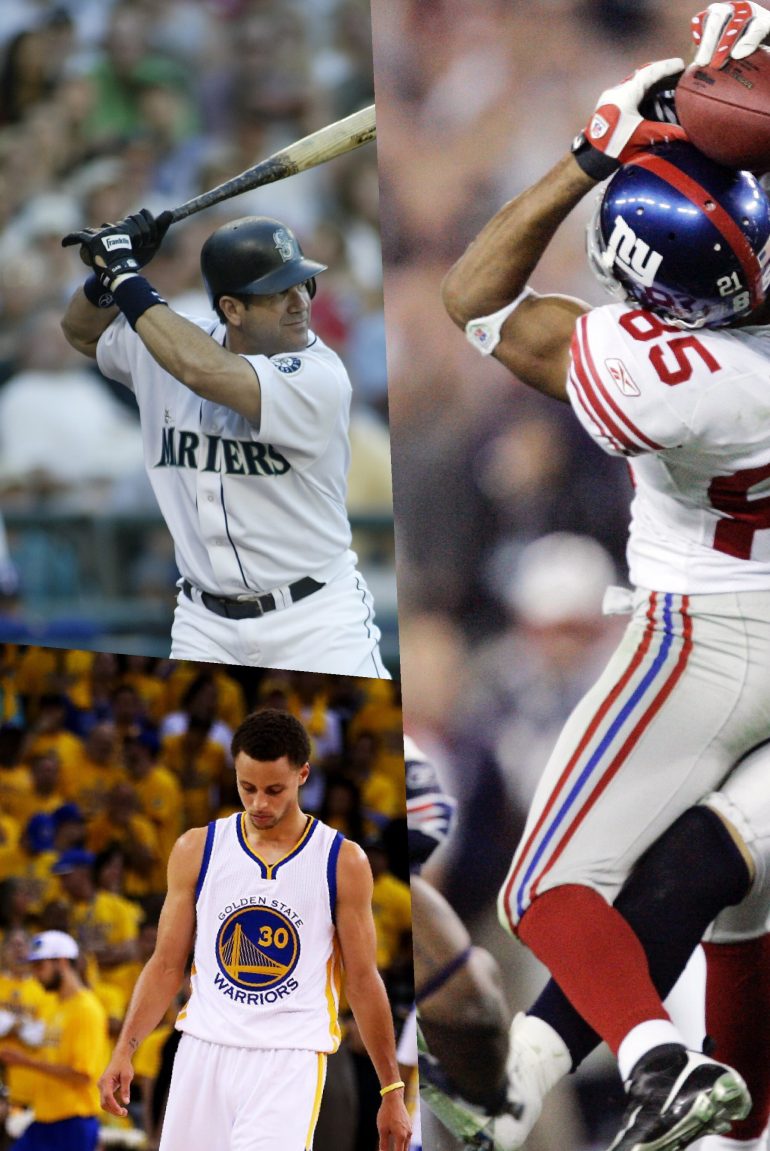 The Difference Between Being Best & Being Champion

Lebron James collapsed to the floor. The weight of the moment was too great for his legs to withstand. He sobbed as the accomplishment sunk in. Steph Curry sat stoically across the floor trying to come to grips with this new reality where he was no longer the NBA Champion. No team had ever been closer to winning it all without actually completing the task. They were done in by a team that was not more talented, but one who hungered for the ring just a little bit more. It was not the first time the best team did not win it all, and it will not be the last. Heck, ask Ramsey Bolton. As the Seahawks attempt to translate their considerable talent into another trophy, it is worth remembering what factors kept great teams from being crowned.

Most people will think of Peyton Manning first when recalling Super Bowl 50. He was not even among the five best players on his team, but let’s leave that alone for now. The Panthers were the best team in the NFL over the course of the regular season, going 15-1, and dominating most opponents in their path. There were coming off a thrashing of the Seahawks and Cardinals, and were undoubtedly a more talented team than the Broncos.

Two things certainly did them in, and a third was likely a factor.

First, even if the Panthers were the more talented team, it was the Broncos who had the most talented individual unit. Their defense was the best unit in football last season. Their offense was terrible and their special teams were good enough, but the defense made that team go. If they were a bodybuilder, they would have massive arms and skinny legs.

Carolina had a far more balanced team across offense and defense, but neither side of the ball was quite as good as Denver’s defense. Still, that might not have been enough if the second factor was not in play. Denver’s strength matched up with one of the Panthers’ weaknesses. The best part of that tyrannical Broncos defense was their two edge rushers, Von Miller and DeMarcus Ware. That strength of strength faced a set of Panthers’ tackles who were average, at best. This created a mismatch that kept the Panther offensive strengths from ever becoming a factor.

The third aspect of this game that likely played a role was grit. Teams often take on the personality of their leader, and Cam Newton was undoubtedly the leader of that Panthers team. He has a well publicized track record of gloating when on top and sulking when things do not go his way. Many will point to his postgame press conference as damning evidence, but his lack of effort in recovering a fumble in the game was far more telling.

Diminishing effort in the face of adversity is never a good sign for a player or for a team with championship aspirations. The opposite is also true. One of the most common characteristics of successful people is perseverance in the face of obstacles.

Last night Twitter was full of people comparing the collapse of the Warriors this season to the failed final play for the Seahawks in Super Bowl XLIX. That one play left such an indelible image that most cannot recall much about the other 124 that happened that day. The decision to run that play in that situation deserves scrutiny, but there is more to learn from that game about the thin line separating the champion from the runner-up.

The Broncos enjoyed the advantage of having the best unit in Super Bowl 50. The Patriots had no such advantage the year prior. Or, at least if they did, the advantage was too small to be a deciding factor. What New England did have was the best player on the field. Tom Brady may wind up being the best to ever play the sport, and his performance in that game was among his best. The fateful Seahawks play would have had no significance if Brady had not led a terrific comeback in that fourth quarter.

Nobody wants to hear about injuries as an excuse for losing, and for good reason. Durability has to be considered part of the equation for building a championship roster. That said, ignoring the role of health in deciding championships would be foolish. Seattle played in Super Bowl XLIX with three of their four starters injured in the secondary. Kam Chancellor injured his MCL the Friday before the game. Earl Thomas injured his shoulder in the NFC Championship game and would require surgery after the Super Bowl. Richard Sherman played the end of the Packers game with the use of only one arm and nearly required surgery as well. Jeremy Lane was lost early in the game after intercepting Brady, leaving the secondary even more thin. Jordan Hill, who had collected 5.5 sacks in the final six games of the season was out. Brandon Mebane was out. Cliff Avril exited in the third quarter, leaving a big hole in the pass rush. In a game this close, even one of those players being at full health might have made the difference.

One of the most pronounced differences between the 2013 Seahawks and the 2014 Seahawks was what they had to prove. They played the 2013 season with a chip on their shoulder. It was them against the world. Despite trying to deny it at the time, they now acknowledge the impact winning a Super Bowl had on their collective psyche. There is no way to draw a direct line between that change and the final play of the game, but it would not be far-fetched to say the Patriots prepared just a little better and paid a bit more attention to detail than Seattle. Bill Belichick and Brady were coming off two Super Bowl losses, and had not won one in 10 years. Not to mention, they were being raked over the coals for deflategate. However you get it, achieving that edge that drives you to grind just a bit longer and harder can be the deciding factor.

That appeared to be the case with James and the Cavaliers last night.

New England famously went undefeated that year and appeared unstoppable before David Tyree and the NY Giants shocked them in the big game. This game was remarkably similar to the 2015 Super Bowl. There was no doubt that the Patriots were the better team, but they were undone by a Giants pass rush that was the best unit on the field all game. Even with that advantage, it took another factor to put a ring on their fingers: luck. Call it what you want, but the play that resulted in Tyree making that catch was more luck than anything else. That doesn’t make it any less amazing of a play. It just acknowledges there are some things outside your control. Had the Seahawks won the Super Bowl in 2014, Packers fans would have rightly claimed luck played a major role given the miraculous comeback in the NFCC.

Yep. Seattle lost two Super Bowls they should not have. Injuries played a major role in this one as well, but since we have already covered that factor, let’s touch on another. The Seahawks had never played in a Super Bowl before. Neither had most of the Steelers. The organization, though, had been to plenty and won nearly all of them. Seattle came out conservative. They never had the look of a team that believed they were the best team on the planet until the drive where Jerramy Stevens catch at the 1-yard line was called back for a phantom holding call. Had that play not been overturned, we likely would have at least two rings at the Seahawks headquarters.

That brings up another factor: officiating. I’m sure a few Warriors fans would be happy to bring this one up. It falls under the same category as injury where nobody wants to hear it as an excuse, but it can definitely play a role. This Seahawks game infamously had an array of bad calls that even the officials later admitted were mistakes that cost them sleep at night. It happens. The point is that you can be the best team on the planet, but that doesn’t mean you can control who makes the calls or the calls they make.

The Warriors were not the only franchise to set their sports win record, only to fall short of a championship. The Mariners won 116 games in 2001, but did not even make the World Series. A few reasons come to mind.

That team was the ultimate ensemble cast. Everyone contributed, and a few good players had great years. There was no dominant starter. The offense was predicated on contributions up and down the order without a truly dominant hitter. Ichiro Suzuki was amazing, but he was a table setter. It is hard to dominate a game by getting on base. Bret Boone and Edgar Martinez were awesome, but they did not have a player in the Top 10 in MLB for slugging percentage.

The flip side of what we discussed with losing the edge that after winning it all is the mental advantage gained from knowing what it takes to win a championship. The Mariners met the New York Yankees in the ALCS. That Yankees team had won three straight World Series, and four of the last five. The Mariners had never played in a World Series, let alone won one. Watch enough postseason games in any sport and it becomes easy to recognize the team that knows it can win from the one trying to convince themselves that they can.

Maybe American sports should consider going the way of European soccer leagues that crown the champion based on the complete season as opposed to a championship game. One could argue the best team is the one that played the best for the longest stretch of time. For that to be true, leagues would need to move to balanced schedules where every team played the same teams. Even then, injuries, weather, officiating and other variables would mean it would be impossible to say with certainty which team was best.

Instead, we embrace the imperfections of our crowning process and cheer like hell that our team wins. It is the existence of those imperfections that make the process so captivating and thrilling. Deciding which team is best is always debatable. Deciding who is a champion never is.