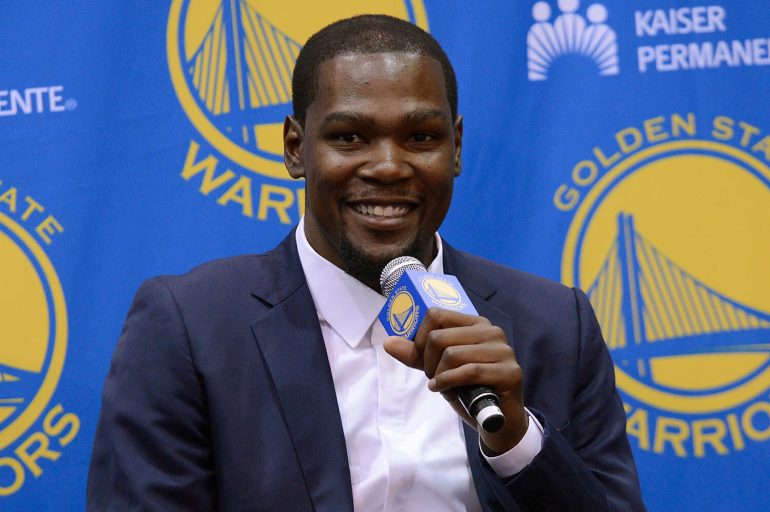 Why Do NBA Players Make More Money Than NFL Players?

NBA free agency recently grabbed headlines with superstars like Kevin Durant and Dwyane Wade changing teams. But it was more than just the big names that were generating conversation. It was guys like Chandler Parsons getting $94M, Mike Conley getting $152M, and Bismack Biyombo netting $72M, and all those contracts were 100% guaranteed. That means Biyombo is getting more guaranteed money than J.J. Watt and Drew Brees, combined. The obvious question is why the nation’s top sport, the NFL, pays players less than other leagues and with far fewer guarantees.

There are 4 times as many NFL players as NBA players

A simple point that is often lost is just the roster differences between these two sports. There are 30 NBA teams who are required by their collective bargaining agreement (CBA) to carry an average of 14 players on their roster. That gives you a minimum of 420 players employed by NBA teams. The NFL has 32 teams, with a roster of 53 players, for a total of 1,696 players. That does not include the 10 practice squad players, who make considerably less than the NFL minimum salary, but would bring the total to over 2,000 paid NFL players.

Even though NBA players make a higher average salary than NFL players (~$5M/year vs ~$1.9M/year), NFL owners dish out roughly twice the total payroll that NBA owners do. 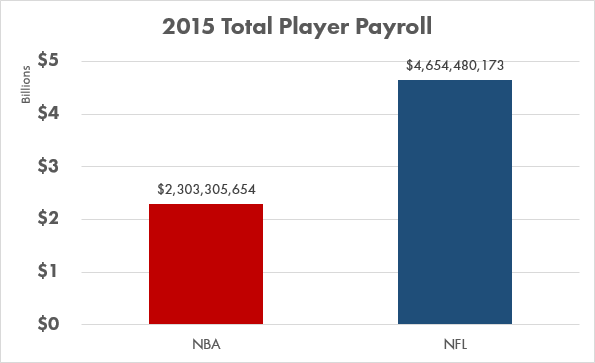 The disparity in number of games played shows up in other places as well. Despite the NFL being a far more popular sport, with their games drawing far higher ratings, the NBA recently signed a 9 year TV deal for $24 billion compared to the NFL’s new 9 year TV deals that total $27 billion. The price per game to air an NFL game is exponentially higher than an NBA game, but the sheer volume disparity means the NBA gets remarkably close to the NFL TV dollars overall.

This one might not be as obvious. Forget starters and bench players for a second. Most NBA teams will play at least eight players with regularity and up to ten players, depending on depth and coaching philosophy. There can only be five players on the court at any one time, so your total playing time allotment is 240 minutes per game. If you were to divide that equally among 10 players, each player would get 24 minutes per game, or 10% of the playing time.

NFL playing time is less about minutes than it is about snaps. Total snaps played across offense, defense, and special teams varies across teams. Looking at the snap count data at FootballOutsiders.com, you will find teams like the Philadelphia Eagles played about 2,870 snaps in 2015, where a team like the Seahawks played just 2,520. Let’s pick a number in-between like 2,700 snaps. That means there would be ~169 snaps per game across all three units to go around. NFL teams are allowed to dress only 46 players per game, but the vast majority of those players will see playing time, even if only for special teams. Let’s say roughly 40 players get snaps. If we divvy those snaps up the way we did for the NBA, forgetting starters and reserves and specialists, 40 players would get just over 4 snaps per game in a game with 169 snaps available, or 2.5% of the playing time.

NFL fans will rightfully raise an eyebrow at those number since playing time is handled so differently in the NFL. That is fine. Let’s look at some of the best and most highly paid players in both leagues.

Superstars like Kevin Durant and Lebron James play about 75% of the games they participate in. Tom Brady, Russell Wilson, Cam Newton and other star quarterbacks command the highest salaries in the NFL, but none of them play on defense or on special teams, meaning they are on the bench for around 60% of the game. Richard Sherman played nearly every defensive snap for the Seahawks and also contributed to special teams. He still topped out at 42.9% of the total snaps available for his team. Defensive lineman and other positions that rotate more often and may not be a part of subpackages in the NFL get even less playing time. Fletcher Cox, a second-team All Pro defensive tackle who just got a massive new deal from the Philadelphia Eagles, plays basically a third of each game.

It may surprise some that despite the huge advantage that NBA players have in terms of percentage of game played, the top NFL scorers far outpace them as a percent of total team scoring. Quarterbacks, in particular, account for roughly half of their team’s points in many cases.

Cam Newton was the MVP of the NFL last season and it showed up most in his total scoring. His 35 passing touchdowns plus 10 rushing touchdowns, worth six points apiece, accounted for 53.9% of his team’s points. Kevin Durant was the third-leading scorer in the NBA at 28.2 ppg, but only accounted for 27.4% of his team’s scoring. One could argue, and I’m sure many NFL agents do, that Newton is worth more to his team than Durant despite playing 35% less of the game because of the amount of points he is responsible for.

If we really wanted to geek out, we could look at how many standard deviations each player was above the average for his position, but we will save that for another day.

Tougher debate is on guaranteed dollars

It is often said that all NBA contracts are fully guaranteed, which is not technically true. Only 75% of Boris Diaw’s contract with the Jazz is guaranteed, for example. Still, Andrew Luck’s recently signed new mega-deal has practical guarantees of around $87M, or 71% of the total contract. That is actually part of an upward trend in guarantees for some NFL positions like quarterbacks, pass rushers and cornerbacks. Aaron Rodgers signed his new 5 year, $110M contract in 2013 and received just 49% in guaranteed money. Von Miller just got $70M, or 61% of his contract guaranteed.

All those NFL numbers pale in comparison to the top tier NBA players, who all receive fully guaranteed deals.

The top 23 contracts in the NBA are worth more guaranteed dollars than the top NFL guaranteed contract ($87M for Luck), per Spotrac.com

That means roughly 5% of NBA players have more guaranteed money in their contract than any NFL player. How can that be?

Owners and players likely would point to the same reality, seeing two sides of the same coin. The NFL is a brutal league, where injuries can have a major impact on the longevity and productivity of players. Owners would say that means contracts should guarantee less. Players might say that is why their contracts should be guaranteed as much as the NBA or MLB. The owners have won that debate thus far at the bargaining table.

It make be more remarkable that MLB and NBA ownership have allowed the guarantee structures in their leagues to continue. This is why people say the player’s union in those leagues is stronger than the NFLPA. Of course, it is not that simple.

NBA and MLB players know they can sit out a full year or longer and still have a significant portion of their career in front of them. NFL player careers are fleeting. Missing one full season could have a far more damaging impact to their career. NFL owners are sitting on a pot of gold that is not likely to diminish anytime soon, so they have the ability to outlast players. Where some would say the NFLPA is weaker, I would say their sport forces them to be more pragmatic.