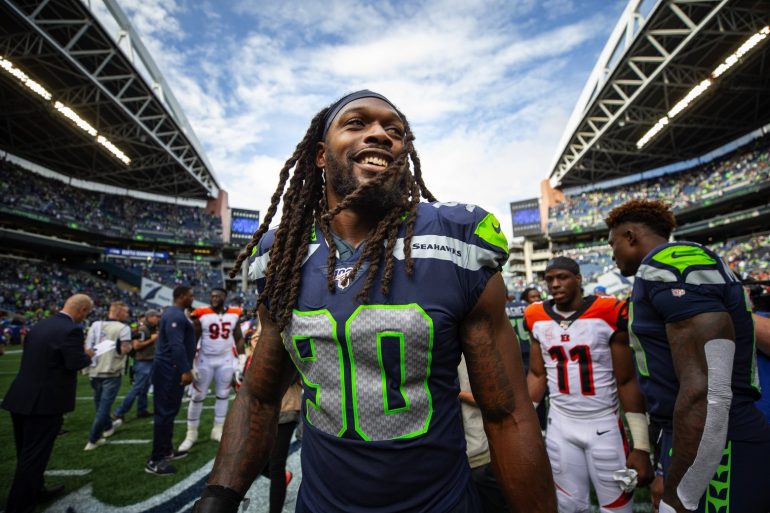 Jadeveown Clowney after Seattle's week 1 win over the Bengals.

We have been debating the most important moves the Seahawks could make this offseason and the biggest mistakes on Real Hawk Talk since the season ended. For me, one player represented both. Justin Britt was due to enter the final season on his contract making a massive salary while playing slightly above average football at a position that is far from the most important on the field. Seattle had the opportunity to cut him and save nearly $9M in cap space that could be spent on other, more important areas of the roster that were also in more dire need of talent infusion. Word broke Sunday night that the Seahawks were releasing Britt, and they took it a step further by also releasing D.J. Fluker. This pair of moves, coupled with wisely letting Germain Ifedi sign with another team, gives Seattle a chance to dramatically improve their offensive line and their defense, and maybe just save an offseason that was perilously close to disaster.

Britt was originally drafted to play right tackle. People forget that he played that position in the Super Bowl versus the Patriots. He was an awful right tackle. The team moved him to left guard. He was arguably even worse there, much to the delight of Kawann Short. Moving to center was the last straw, and thankfully for all involved, it was a good move. Britt eventually became a Pro Bowl alternate at that position.

His play since has been middling. Many fans latched onto the notion that Britt was one of the best centers in the league after his breakout season. The truth is he regressed and was basically an average performer. More specifically, he was an above average run blocker and a below average pass protector.

To put it in perspective, Joey Hunt replaced Britt after he was injured last year and was abused in a number of games by more powerful linemen. Hunt had a far higher pass protection grade (55.6 vs 45.7) than Britt. In fact, Britt allowed the same total of sacks plus hits (6) as Hunt did, but in 150 fewer pass block snaps. Yikes.

Imagine paying $12M for that type of production. Those are the types of moves that kill a franchises ability to compete. It was so important that the team avoid paying so much for so little that I was okay if they rolled the dice with Hunt, Ethan Pocic and possibly a converted guard like Phil Haynes or a rookie draft pick at the position. Just do not spend that money on Britt.

Save money and improve the position? Sign me up.

Finney is not a great run blocker. That signals another area of growth for the team. Seattle has consistently favored run blockers over pass protectors much to all of our chagrin. Going from Britt to Finney is very clear step in the other direction.

D.J. Fluker is a similar story on that front. Fluker brought some swagger and toughness to the line that was greatly appreciated. He is an easy guy to root for, and that part of his presence will be missed. He was also a flawed lineman who often struggled in pass protection and had trouble moving to the second level in the run game.

Seattle saved about $4M by letting him go. I did not expect to see that happen until training camp, depending on how position battles worked out. Making the cut now indicates the team has a lot of confidence in their options at guard.

Rookie Damien Lewis is the name that rises to the top given his high draft status and mention from Carroll that he was going to compete for the starting right guard role. Other options could include Chance Warmack and Phil Haynes. Mike Iupati has played left guard his whole career, so he is less likely to shift over.

Warmack is a name to watch, as he would be a big upgrade if he truly is healthy after taking a season off and can return to the form he displayed in Tennessee. It would be great to see Lewis grab hold of the spot as well.

The combined money saved by the two moves is over $12M, which leads to questions about where that money could be spent. Here are a few options.

Today (April 27th) marks a milestone in the NFL offseason where teams can sign a player in free agency without having it count against their compensatory pick formula. If you do not know what that is, just focus on the fact that teams might be more willing to spend money at 1PM PT today than they were before.

The speculation is that the Titans, and possibly the Jets, have been interested in Clowney and this milestone could be the moment they make their best offer.

Should Clowney like their offer, he probably is gone. There is also the chance that Clowney and the Seahawks have been waiting patiently to see if anyone can beat what Seattle was offering, and if nobody does, this might mark the moment where he relents and takes their offer.

Griffen is a free agent who has been linked to the Seahawks and is a better pass rusher than Clowney, but is also older and with less of a dominant upside. He would cost a little bit less than Clowney, and if the Clowney domino falls, Griffen could sign soon after.

This is a long shot, but the Chiefs have a significant issue with cap space. They may not be able to keep Jones on the roster. Seattle could be considering trading for him since he is franchised, and extending him to a big deal. Jones is better than Clowney. He would be a terrific addition in the middle of the line.

Similarly, the team could be making a move for the disgruntled Jaguars pass rusher, but they just drafted Darrell Taylor early and it seems less likely they would bring in a guy who plays LEO like Taylor when they also have Benson Mayowa.

Harrison is a huge run stuffing defensive tackle who is a bit older and should not cost all that much money. If they sign Harrison, that certainly would not be the reason to make these cuts right now.

Dennard is a nickel corner who signed earlier this offseason with the Jags before seeing the deal fall through. It was a small deal that also would not require the Seahawks to make these kinds of cuts.

Seattle could also be preparing to extend someone like Griffin, which would potentially eat up $5M+ in cap space this season.

My hope is we hear the team has signed Clowney, Harrison and Dennard. That would be a massive win for the defense. More likely, Griffen and Harrison are the names we hear. No offense to Griffin, but that would be among the least exciting reasons to clear the cap space.

The good news is the team could clear even more space if they want. Guys like Branden Jackson and Jacob Hollister were signed as restricted free agents and can be cut to save over $5M more. They could also potentially move on from K.J. Wright, but that seems less likely.

Whatever moves they make, the Seahawks are now in position to salvage an offseason where pass rush was their biggest need and they nearly squandered every chance to address it. We are officially on watch for the next big move.