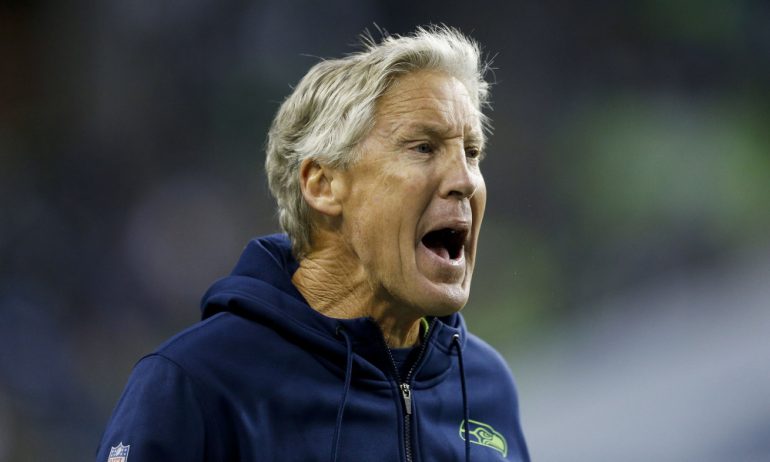 Recently Brian wrote Let’s Talk About Pete Carroll. Describing it as “part journal, part analysis”, it’s a pretty comprehensive collection of many of the different discussions being had right now around Pete Carroll and the Seahawks. I think the perspective he shares is one that’s representative of many Seahawks fans. I’d encourage you to read it if you haven’t already.

There are a few things in the post that I took issue with and a few things I disagreed with. So having myself been triggered, and in the interest of furthering the dialogue, I’ve written a response.

Beyond Football – The Ungrateful Nerds

“This general premise that we have a major problem that needs to be solved always feels a bit spoiled to me. It’s like getting out the pitchforks and torches because you were only served cookies when you also wanted ice cream.”

And at the end of the day, no matter what type of fan you are, we all want Seattle to have the best possible football team.

The beyond football arguments Brian makes (and that others have also made) loses sight of this. There is an assumption of bad faith on the part of those, particularly the analytics crowd, who are skeptical of Pete Carroll.

“I do not see that humility from some in the analytics crowd. They share out data that backs up a perspective they have (I realize they would reverse that) and seem to hold it up as proof that they know more than Carroll.”

There’s a lot to untangle here, but this is a major accusation. It insinuates that the many folks, including myself, who have replicated advanced analytics findings are lying. Or at least being deceitful. And it insinuates the purpose of this lie is to undermine Pete Carroll.

One major mischaracterization is of the analytics crowd beliefs about their own football knowledge. Not only is no one is claiming to know more about football than Pete Carroll, the analytics crowd openly acknowledges that Pete and all other NFL coaches know far more about football. The disagreements are about how to best optimize certain decisions based on the play by play data, not from anyone’s personal knowledge of the game. The argument is that teams should pass more on first down, not that a data scientist should be deciding which pass to call.

Another mischaracterization of the analytics crowd is regarding how replaceable Pete Carroll might be.

In his recent article on Pete Carroll, Ben Baldwin specifically addresses this. Acknowledging that coaching changes are risky and that nothing is guaranteed in sports, he goes on to discuss the possible organization overturn that could come with a change at head coach.

“Another benefit of Carroll’s continued tenure is the stability he brings. Especially given the ownership change following the passing of Paul Allen, Carroll is the primary source of continuity in the organization. A new head coach could mean new position coaches, scouts, support staff, organizational philosophy and maybe even general manager.”

Those arguing for replacing Pete are doing so based on the possible rewards, not because there is no risk.

Let’s end the commentary on the analytics crowd by discussing this last quote.

“I would also love to see more frequent moments when the reaction to a team or player defying probabilities is to dig in to understand why in the hopes of feeding that back into the system instead of immediately discrediting it as an outlier or irrelevant.”

Here is a collection of 33 different articles supporting several of the most common arguments by the analytics community. Every year, NFL Football Operations holds the Big Data Bowl which had over 1,200 submissions in 2019. Many more people, outside of Seahawks fans and across other sports, are playing with data and sharing what they’re learning on Twitter and blogs. All of this is being done to better understand the game, test truisms, explore questions that have arisen from previous findings, and to push the boundaries of what we can learn from analytics.

You can disagree with certain findings, you can remain confident that new sources of data will invalidate beliefs based on existing data, but you cannot accuse the nerds of a shortage of curiosity.

Football Stuff – Searching For An Argument For Pete

Many of the football arguments laid out in favor of Pete Carroll are confusing and often seem at odds with each other. Pete’s correct to believe in the importance of defense based on recent Super Bowl winners, but many teams have won Super Bowls with mediocre defenses. His belief in a strong running game is sound, but their focus on building a strong running game has hurt them. Analytics have overblown the importance of early down passing, but Pete should be credited for passing more on early downs. Pete deserves more credit for his role in personnel decisions, but has also seen his defense fall apart because of lack of talent.

In fairness, any good evaluation of a head coach will be nuanced. It’s even more complicated when the head coach also leads the front office. But it’s hard not to feel like the goal posts are moving with some of these arguments.

“The same folks who admonish Carroll for the formula he believes in, celebrate John Harbaugh and Kyle Shanahan for following that formula.”

It’s hard to understand how this sentence could be written by the same person who has accused the analytics crowd of cooking the numbers in order to advance a certain perspective. Regardless, it’s worth pulling apart.

On the surface it’s easy to compare San Francisco, Baltimore, and Seattle’s philosophies in 2019, but they are important distinctions. Maybe the biggest difference between these teams came on fourth down. The Niners went for fourth down nearly 3 times as often as Seattle, ranking seventh in the league. The Ravens went for fourth down over 4 times as often, ranking first in the league. Seattle ranked just 30th in fourth down rate. This was a major factor in the praise Harbaugh received, and the criticism Pete Carroll received, from the analytics crowd.

Another difference is in the effectiveness of Baltimore and Seattle’s rushing games. By any measure, Baltimore’s run game was far better than Seattle’s.

Seattle has had some pretty effective rushing attacks, though maybe not as many as you would expect given the emphasis they place on running the ball.

There’s a distinction worth making between San Francisco and Seattle’s rushing games as well. The two teams were similarly effective running the ball, and San Francisco was actually the run heavier team in the aggregate. When you consider game state, however, there is a significant difference in their pass rates.

San Francisco was a pass happier team than Seattle in nearly every situation, they were simply leading more often than Seattle.

These are clear differences that, at least in part, explain why many fans praise Baltimore and San Francisco while criticizing Seattle. It’s not coming from any bias against Pete.

This is another mischaracterization, especially if directed at the analytics crowd. As Brian laid out, winning Super Bowls is hard. The bigger criticism is that Seattle has not won many playoff games since the 2014 season. 3 Wild Card round wins is somewhat disappointing, especially considering how they’ve followed up those wins.

There’s a lot of truth to what Brian said regarding the improvements from 2011 to 2012. The LOB was a historic defense and, while many of the key pieces were in place in 2011, there were significant additions in 2012. The rushing attack also improved between 2011 and 2012.

Their rushing offense went from 14th to 1st by DVOA, and their defense went from 10th to 2nd. The entire team improved, and many people deserve credit for that. But you don’t have to have an agenda against Pete to think Russell deserves most of the credit for Seattle’s Super Bowl teams.

Why I Believe Pete is the [Redacted] Bet

“If Carroll cannot fashion a top ten or even top fifteen defense over this offseason, it starts to make more sense to roll the dice with an offensive coach who can potentially score more points and hope they find a clever defensive coordinator somewhere… If you do have significant doubts about Carroll, now would be the time to make the change.”

Some fans are willing to give Pete a lifetime contract for bringing a Lombardi trophy to Seattle. Honestly, I can respect that. We’re all fans for different reasons and in different ways and Pete’s cemented himself as a legendary figure in Seattle sports.

If you’re a different kind of fan, I think Brian sums up the key question of What To Do With Pete Carroll pretty well. What is your confidence level in Pete going forward? Can he recreate and sustain a great defense? Will he change his approach to fourth downs? Will he adapt his offensive gameplan in significant ways? And if not, can he find a way to create a truly successful rushing offense? What are the odds?

Many people are willing to give Pete the benefit of doubt on those questions based on his resume of success. That’s not unreasonable. But others are skeptical, and that skepticism is not unfounded.