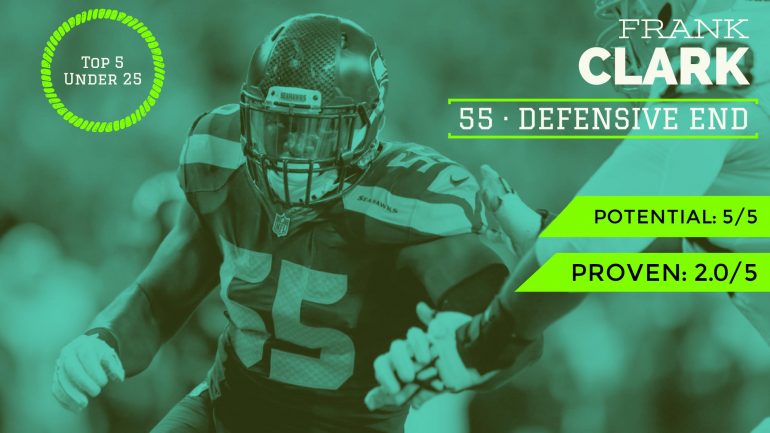 It had all the makings of another Seahawks draft steal. Frank Clark was embarrassing every linemen he faced, on the way to leading all NFL defensive linemen in tackles. He was sacking quarterbacks, forcing fumbles and making tackles for loss. Then, the regular season started, and Clark disappeared. Sure, he was making a good showing against the run, but his pass pressure and impact plays were gone. He would go the whole season without making more than two tackles in a game. His first sack did not come until his tenth game.  That has done little to reduce expectations around the Seahawks second year pro. Players and coaches are united in their belief that Clark can be one of the best pass rushers in football. Fans better hope they are right. Anything less than a breakout season from Clark could keep the Seahawks from reaching their championship goals.

Nobody will mistake Bruce Irvin for Von Miller as a pass rusher, but it would be easy to underestimate the impact of his exit to Oakland this offseason. He had 12 sacks over the past two seasons, which puts him third on Seahawks during that time behind Michael Bennett (17) and Cliff Avril (14). There is a steep cliff after that. Jordan Hill is the next closest with 5.5 sacks, but he had a grand total of zero last year.

Seattle created intense pass pressure in 2013 by having a stable of better-than-average pass rushers like Chris Clemons, O’Brien Schofield, and Clinton McDonald, and a couple of elite players like Avril and Bennett. Nobody had more than 8.5 sacks, and only two players had more than 5.5 on the year. This team does not need a bevy of 10+ sack players to be effective. They do need to disrupt the quarterback to get the most out of their secondary and create turnovers. Having Avril and Bennett do well and nobody else produce more than three sacks won’t cut it. That’s where Clark comes in.

Pete Carroll has said more than once that the team did not use Clark enough last year. The implication there is that getting more snaps will lead to more results. That makes some sense, but Clark got 333 snaps last year, per FootballOutsiders.com. If his only role is to rush the passer in nickel and dime defenses as Irvin did, it is not clear that he will get that many more snaps than what he got last year. The other way he could see his numbers rise would be if his sacks per snap were to go up. That is more about his growth as a player and a pass rusher. Let’s have a little fun and see how you think Clark will improve.

Below is calculator I threw together that lets you mess with just how much you expect Clark’s snaps to change in 2016 and how much his sacks per snap will change. The output of those two numbers will show you his projected sack total for the year. Both numbers are calculated as percentages. That means, if you think his playing time is going to go up 20%, just enter 20 in that field. If you think is pass rush efficiency is going to improve 43%, just enter 43 in that field.

After you’re done, leave a comment with your results so other folks can see.