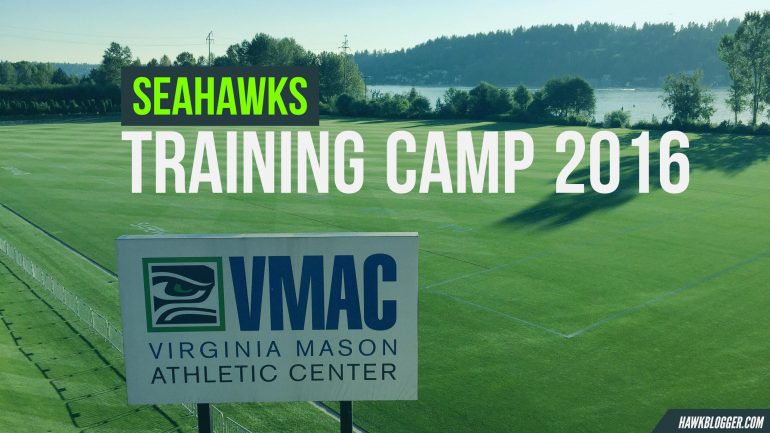 Injuries are piling up

First, the good news. The Seahawks do not have a list of serious injuries yet to key players. Now, the less great news. So many wide receivers and running backs are sitting out right now that it is challenging to evaluate the offense or the defense to some extent. Seattle drafted three running backs, and had two on the roster already. Only one, Alex Collins, was healthy enough to suit up for the scrimmage today. Christine Michael sat out with an illness. Guys like Troymaine Pope filled in after just one practice.

Four of the Seahawks top seven receivers are out. That meant players like Uzoma Nwachukwu got action, and Douglas McNeil was playing with the starters. Things should start to improve in the next week as Thomas Rawls is set to come off the PUP, Michael will be back, and Pete Carroll sounded optimistic that Zac Brooks would return as well. C.J. Prosise will not play in the first preseason game, but should start practicing either late this week or early the following week.

Kasen Williams and Kevin Smith would be wise to heal up as soon as possible as they are battling for what may be the final receiver spot.

Offensive line was a mixed bag

The starting offensive line continues to be, from right to left, J’Marcus Webb, Germain Ifedi, Justin Britt, Mark Glowinski and Garry Gilliam. Bradley Sowell saw snaps at both left and right tackle. My read there is that neither Webb nor Gilliam have locked down their spot. While many are pointing to Jahri Evans as the main threat to Webb, it may be Sowell. I am hesitant to put too much weight on line play in a scrimmage. Things look very different in the preseason games. That said, the starting line did a decent job against the second team defense. There were not a lot of breakdowns.

Russell Wilson chose to scramble a lot, but it was more due to receivers who were not open or Wilson’s own read of the play than because of overwhelming pressure. Gilliam gave up some pressures on the left side. Britt had one bad snap. Glowinski was whistled for a hold. Other than that, it was a pretty nondescript day for the starters.

The reserves got eaten alive by Michael Bennett and Cliff Avril. Terry Poole had no chance against Avril. Bennett spread his pain around, embarrassing George Fant at left tackle, then Kristjan Sokoli at guard. Bobby Wagner had a sack on a jailbreak blitz up the middle.

Trevone Boykin had one of his more impressive practices. One could argue he stood out because the offensive line play was bad enough that his athletic advantage over Jake Heaps came into play. Carroll might respond, “Exactly!” Even setting aside the scrambles, Boykin showed a soft touch on a 50 yard touchdown pass to Collins up the left sideline. He also zipped the ball into some tight spots. There is little polished about his play. There are some intriguing tools.

Heaps barely got a chance. His last possession was a good example:

1st & 10: Play action bootleg pass. Bennett gets by left tackle Odhiambo so fast that Heaps is sacked as soon as he fakes the handoff. 7 yard loss

2nd & 17: Zips a ball to McNeil. Tharold Simon probably made contact ahead of the ball, but it hit McNeil’s hands. Dropped.

Going against the first string defense with the third string offensive line is tough. Give Boykin his due, though. He had a nice scrimmage.

Evans got snaps at left guard during position drills, but did nothing in the scrimmage. The poor guy has had only a day (or less) with the playbook.

Wilson took a while to get his rhythm. The first string offense only scored once in the first half, and that was a field goal. They scored on all three possessions in the second half, two for touchdowns. Wilson started looking longer downfield. He hit speedster Montario Hunter for a 59-yard strike in stride. He hit Jermaine Kearse for about 35 yards on a second down play to setup the starters first touchdown.

Wilson also showed more comfort throwing the shorter sprint out passes to Tyler Lockett and even hit one of his bugaboo throws, a nicely led swing pass to Collins on a third down play that resulted in a first. Give Wilson receivers like Baldwin and Williams back, add in starting quality tailbacks, and it is easy to imagine the offense putting up big numbers. That’s without counting on Jimmy Graham.

It appears that Eric Pinkins strong play has been rewarded with a move up the depth chart. He seems to have leapfrogged Cassius Marsh for the second string. Marsh arguably has the better day today, showing his strength against the run game on multiple occasions. Carroll mentioned what I pointed out in my last set of notes, that Pinkins is clearly the biggest playmaker of the bunch. If he can show a consistent ability to play against the run, it is highly likely he winds up as the starter. Given that Marsh is also a lock for the roster due to his special teams play and his ability to contribute at SAM and defensive end, and Mike Morgan may be on the outside looking in.

DeShawn Shead was again ahead of Tharold Simon when the team went to three corners. Jeremy Lane and Shead swapped who was playing opposite Richard Sherman when there were only two CBs on the field. Both Shead and Lane had a good scrimmage, making at least one noteworthy play each.

Brandon Williams appears to have moved ahead of Nick Vannett on the depth chart. That will need to be confirmed in future practices. I continue to expect the Seahawks to keep four tight ends this year, so Vannett and Williams would both make it.

Coleman had a sack today. He also made a great break on a ball and could have had an interception. He has seen time with special teams, and is doing the right things to possibly carve out a practice squad spot.

McCray was in the running for best defenders on the field Sunday, breaking up passes, pounding runners, and covering receivers. He got the start opposite Earl Thomas with Kam Chancellor out. He looks like a guy who will add something special to this defense as a third safety this season.

It’s like watching a lion play with its food. He does what he wants, when he wants.

He made a number of tough catches today, and appears ready to step forward to play a more prominent role in the offense.

It is notable that Collins made his big play as a receiver out of the backfield. He was not known for catching the ball in college, but looked natural racing down the sideline on the wheel route and hauling in the pass over his shoulder. He also fumbled, which is concerning given his trouble in that area at Arkansas.

Some nice throws for the youngster today. It was the first time his talent started to shine a bit.

These scrimmages are often riddled with penalties and mental mistakes. This one was relatively clean by that measure. The second and third string offenses tend to get abused by the first string defense. Both Heaps and Boykin had some moments today. What was missing were big runs.

There were a few running plays that went beyond 10 yards. Very few. Past years has seen Marshawn Lynch, Michael, Rawls and others go for big gains. It felt like the talent level was just not quite there in the backfield. It is always hard to tell how much of that is the runner versus the line versus the fullback. My instinct was that it was largely due to the runners.

Seattle has a chance to get healthy heading into their first preseason game next weekend. There is a lot to be learned in that game.