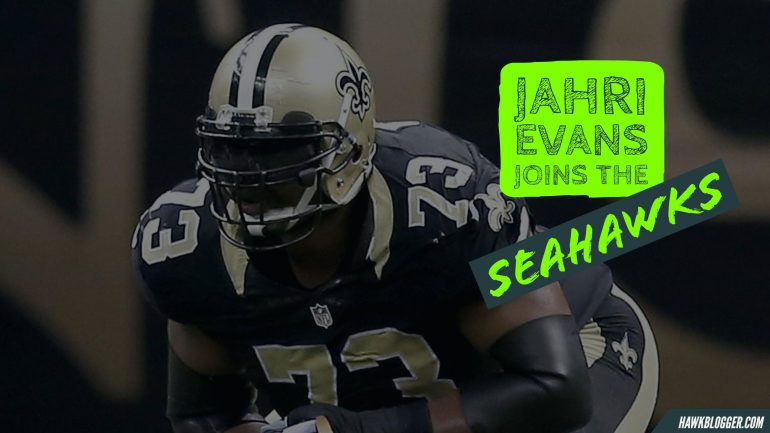 News broke yesterday that former All-Pro guard Jahri Evans agreed to a deal with the Seahawks. Adding a veteran of his pedigree a week into camp set off a series of theories about what it meant and who it may affect. Fans are right to wonder about the move. John Schneider and Pete Carroll do not sign veteran players without a clear plan in mind, and accomplished players like Evans do not sign deals just for the glory of training camp. Let’s take a look at the things each side likely are hoping for.

What the Seahawks want (most likely to least likely)

1. Teach youngsters how to be professionals

Mark Glowinski, Rees Odhiambo, Germain Ifedi, and Joey Hunt have a combined one NFL start between them. Justin Britt has his hands full learning the center position. Garry Gilliam is entering just his second season as a starter, and his first as a left tackle. J’Marcus Webb is battling to earn his spot, and may not have come into camp in the best shape. Not to mention, Webb and fellow veteran Bradley Sowell have never accomplished much in their careers.

Evans has 6 Pro Bowl trips, 4 1st Team All-Pro selections, and 1 2nd Team All-Pro selection in his career. It is fair to question whether he still has it. There is no question that he once did. Someone in that room needs to help these young players form the right habits and prepare for games the right way. People overrate “leadership” as a characteristic when trying to guess about roster decisions. Carroll and Schneider have consistently kept the best players, and rarely hang onto a veteran simply due to their perceived value as a leader.

Still, this offensive line has the potential to make or break the season for the Seahawks. Coaches can only do so much. A player like Evans can help from within.

2. Challenge for a backup role

The guards most likely to make this team right now are Glowinski, Ifedi, Odhiambo, and either Will Pericak or Kristjan Sokoli. The first three are locks. That last spot is open. Carroll and Schneider would probably love to see Evans come aboard for that final guard spot as a reserve. It is unclear Evans would be interested in that.

3. Challenge for a starting role

Many people immediately assumed this is why the Seahawks signed him. I’m not so sure. They want to keep Ifedi where he is so that he can succeed and gain confidence. They definitely want to keep Glowinski where he is. Unless the Seahawks are inventing the three-guard lineup in the NFL, Evans is going to have a hard time breaking the starting lineup. He likely would need to prove without a doubt that he is one of the five best linemen to force Seattle to consider shifting Ifedi outside to right tackle.

1. A starting role on a Super Bowl team

Beset by injuries the past couple of years, Evans most likely wants to prove he still can play the game at a high level, and wants to do so for a championship team. He has to know that the competition will be difficult. You can excuse him if he thinks nobody can compete with him if he is right.

Players do not like training camp. Veterans like it the least. Evans has made a ton of money and been recognized as one of the best players in football for a decade. There is a real question about whether he would be open to the idea of sitting on the bench for a season making what is probably a veteran’s minimum contract when he could choose retirement instead. This is where what Seattle wants may not mesh with what Evans expects.

The assumption is that Evans is now part of the Seahawks 2016 plans. That might be premature. The most likely place Evans would find himself on the depth chart when the season begins is as a reserve guard. Should that become reality, there will be a decision point for Evans about whether that is something he would be willing to do for the first time in his career. That could lead to another brief stint for a veteran in Seahawks training camp like Terrell Owens and Antoine Winfield. That would mean Seattle would at least get a few weeks of him teaching up the youngsters, so the Seahawks get something out of it.

The flip side would be that either Evans forces his way into the starting lineup or is willing to play a backup role. Either would be a huge win for the Seahawks.