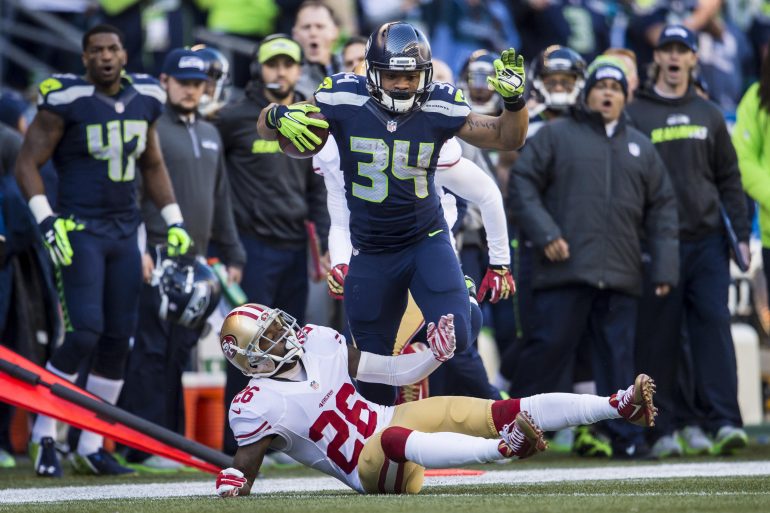 Seahawks running back Thomas Rawls took a screen pass from Russell Wilson and raced up the right sideline, then blasted 49ers cornerback Tremaine Brock on his way to a 12-yard gain and a first down.

Is Thomas Rawls The NFL’s Most Underrated Player?

ESPN recently released their Top 100 list of best players in the NFL. Seven Seahawks were mentioned, with three being among the Top 25, most of any team. One name on the list caught my attention, and it was not a Seahawk. Todd Gurley checked in as the 29th best player in the NFL, according to this poll. That should not come as a huge surprise as Gurley won the NFL Offensive Rookie of the Year award, living up to his hype coming out of college as a first round pick. What would come as a surprise to most NFL fans is that he may not be the best running back of that rookie class, and his chief competition resides right here in Seattle.

Thomas Rawls is the ultimate underdog

Seahawks second year running back, Thomas Rawls, fittingly grew up in Flint, Michigan. Life is not easy there, and it certainly has not been for Rawls. After a standout high school career, University of Michigan brought him aboard and played him in 10 games as a true freshmen. Rawls never saw real opportunity or success there, and eventually transferred to Central Michigan for his senior season. He excelled on the field with over 1,100 yards and 10 touchdowns, while only playing in 7 games due to injury and suspension.

Twenty-two running backs were taken in the 2015 NFL draft. None of them were named Thomas Rawls. It would take a call from Seahawks General Manager John Schneider to provide his opportunity as an undrafted free agent. A roster spot was far from guaranteed, as is the case for all undrafted free agents. Rawls’ path was even more daunting consider the team had Marshawn Lynch, former second-round pick Christine Michael, and established backup Robert Turbin in the fold. They also signed another undrafted free agent in Rod Smith and later added veteran Fred Jackson.

Rawls had an outstanding preseason and earned a roster spot to beat the odds. Turbin and Michael were sent packing. By the third game of the season, Lynch went down with an injury and Rawls was asked to step up as a starter. He rushed for over 100 yards in his first extensive action against the Chicago Bears, and then dropped 169 yards on 23 carries for a 7.3 average on the road against the tough Cincinnati Bengals defense.

Lynch returned, relegating Rawls back to the bench for spot duty until late November when Rawls was asked to step in for an injured Lynch once again. This time, he set a Seahawks single-game rookie rushing record with 209 yards against the San Francisco 49ers, which also checked in as the 10th best single-game total for a rookie in NFL history. He would eventually succumb to injury himself, but left as the NFL leader in yards per carry at a whopping 5.6 yards per tote.

Most people would consider any comparison between Rawls and Gurley to be ludicrous. Gurley’s name is already being thrown around as the best running back in the NFL. He will be the first back chosen in a fair share of fantasy football leagues. Take a look, though, at what these two players did in the games they started last season. 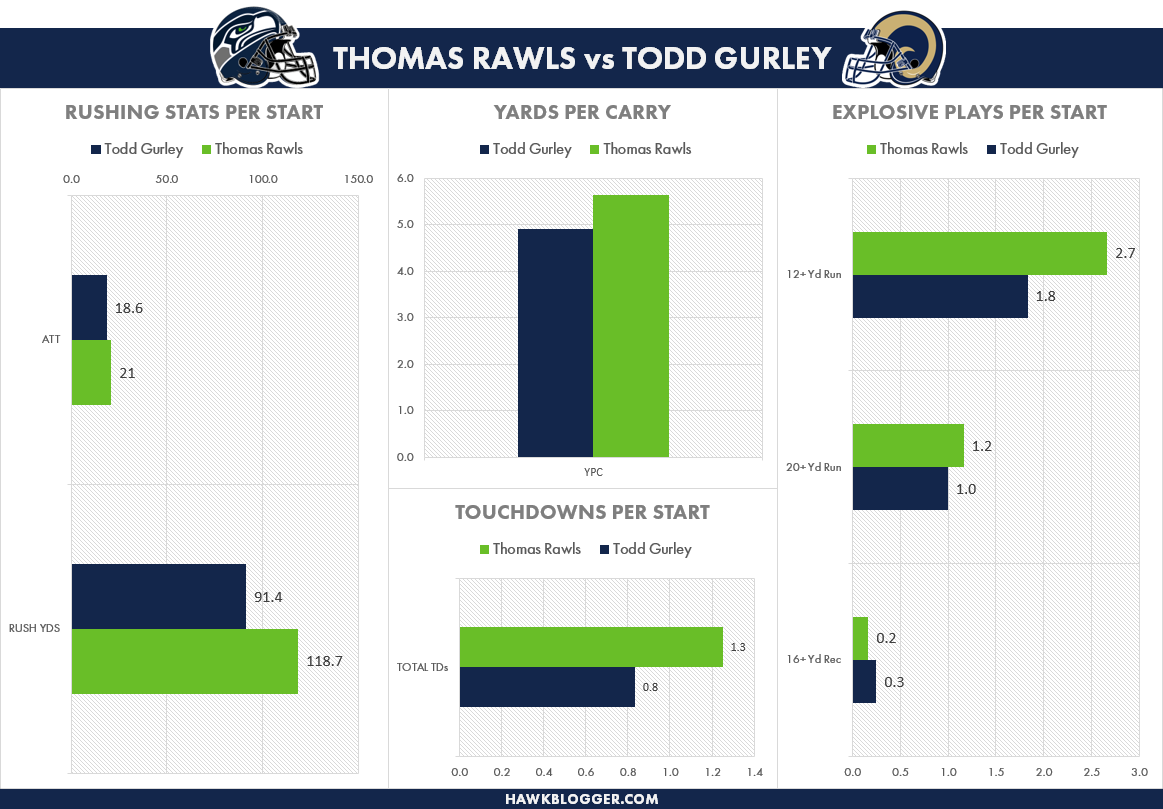 Pretty much anyway you slice it, Rawls was the more productive back last season in the games each player started. Of course, that’s the catch. Rawls started six games (technically seven before being injured on the first drive) to Gurley’s twelve. There is a larger sample size for Gurley, but six starts for Rawls is hardly a flash in the pan.

If Rawls were to sustain his 21 carries per game at over 5.6 yards per carry for a full season, he’d be looking at nearly 1,900 yards.

Barely a whisper outside of Seattle

Those are mind-boggling numbers. If Rawls was drafted in the first round, or possibly signed by a larger market team, his name would probably be everywhere. Instead, people focus on whether and when he will come back from his broken ankle. Even on his own team, the coaching staff has openly talked about how they plan to utilize multiple running backs to carry the load. That is probably the right decision for a number of reasons, but the fact remains that if Gurley was coming back from the same injury, nobody would be talking about running back-by-committee.

Rawls showed rare talent as a rookie, and remarkable grit throughout his life. The rest of the NFL can go on chasing the headliners. That sound they will hear is Rawls blowing by them and bowling over anyone who stands in his way.