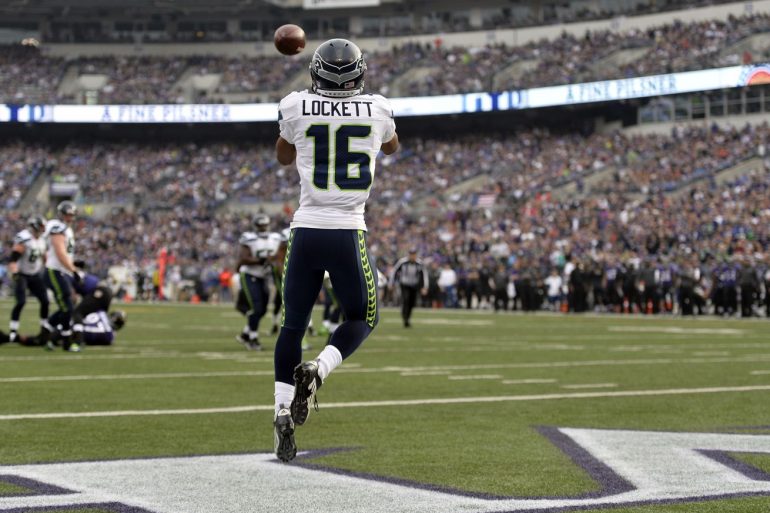 “I want to be the best that I can be and so together, as long as we continue to develop that chemistry, I don’t think anything can stop us.” – Tyler Lockett

Those were the words an impassioned Tyler Lockett used in describing to me the development of his football relationship with Russell Wilson. After just one year in the NFL, Lockett is quickly becoming a household name. Tyler’s rookie season came as a surprise to many around the NFL: his small build worried scouts, coaches questioned his speed, and his hands were designated as inconsistent. Projected to be a mid 4th round pick, talent evaluators were dead wrong in analyzing his football abilities:

“Likely relegated to the slot only in the NFL. Hands are inconsistent in traffic. Top-end speed in question. Got caught from behind more than once.”

However, the Seattle Seahawks were smarter than this. Over the past several years, the Seattle front office has established a trend of identifying overlooked talent and maximizing it. Lockett’s rookie dominance didn’t come as a surprise to the them:

“Seahawks receivers coach Dave Canales was not buying the tempered expectations, however. Not after watching Lockett’s tape from his playing days at Kansas State, and especially after talking to him at the scouting combine in Indianapolis. I thought it was kind of funny in a way, because a lot of people were like, ‘Wow, wasn’t that totally unexpected?’” Canales said. “I was like, ‘No. The guy had like 1,500 yards, 11 touchdowns, teams always put their best corner on him, and he produced. He was their best receiver.’ I wasn’t surprised. I knew he’d fit right in.”

There is a reason General Manager John Schneider traded four draft picks (No. 95, 112, 167, and 181) to slide up in the third round and draft Lockett. He was something special. His unique abilities not only as a wide receiver but also as a punt/kick returner were overlooked by NFL evaluators due to one small flaw: his size. And the Seahawks capitalized on it. In 2016, the rookie receiver was nothing short of electric. In his first regular season game, Lockett displayed his electric special teams abilities by weaving through several Rams defenders for a punt return touchdown.

Throughout 2015, Wilson and the young receiver quickly began to form a connection.

By the end of the season, Russell had established a lethal connection when targeting his young receiver: completing 50-68 of his passes for 655 yards, six touchdowns, and one interception – good enough for a 126.77 passer rating. On top of that, Tyler Lockett had the 4th best catch percentage of all rookie NFL receivers in history – at 73.9%. Even more remarkable, Lockett is “just the second rookie in NFL history, along with Hall of Famer Gale Sayers, to have a kickoff return touchdown, punt return touchdown and at least five touchdown receptions. Lockett’s 1,915 all-purpose yards also established a franchise rookie record.”

“He has elevated his game,” Baldwin said. “I don’t want to say the sky’s the limit for him, because I don’t think he has a limit. As long as he’s taking care of his body, he has the work ethic and the talent that is unparalleled.  We have very high hopes for him and he has high hopes for himself, high expectations for himself. The progress that he has made is unbelievable.”

Receiving high praise from an individual like Baldwin is something that shouldn’t go unnoticed. Head Coach Pete Carroll chipped in too:

“He’s a terrific player,” Carroll said earlier in camp. “He just does everything, he can do all of the short stuff, all of the stuff on the side… He can do everything. He’s a big factor for us.”

If the young receiver continues to develop at his current rate, it wouldn’t surprise me if he approached 1000 yards and 7 plus touchdowns in 2016. Expect big things from the youngster.