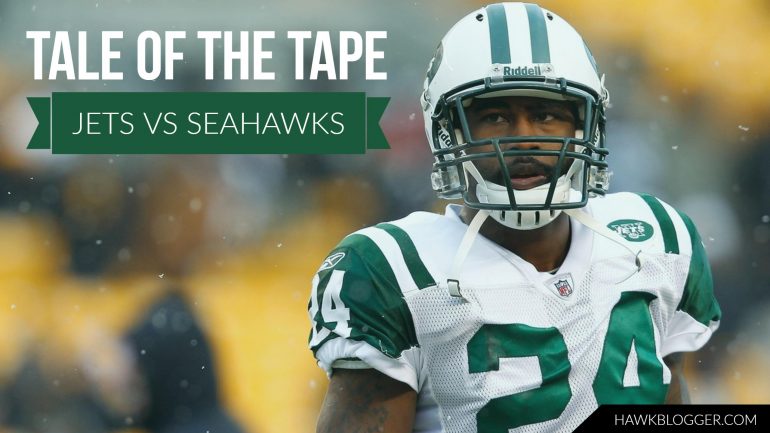 Tale of the Tape: Jets Defense Could Give Seahawks Fits

The Jets show up dead last in our most recent Power Rankings. They rank 29th in FootballOutsiders.com DVOA rankings. Their quarterback just threw a mind-blowing six interceptions in a single game against the Chiefs. Plenty of people will expect the Seahawks, even with injuries, to roll into New York and roll over the Jets. Those people should think again. The old adage is that the NFL is all about matchups, and there are a few key places where New York is well suited to frustrate the Seahawks.

The way this works: Each offense will be pitted against the opposing defense and compared on an array of key statistical attributes based on their respective rank in the NFL. The charts that follow show the rank of each unit for each of these categories. What you want to look for is where there is a big disparity between the height of one bar and another. Keep in mind that since these are rankings, lower numbers are better, so TALL BARS ARE BAD.

New York features one of the most talented defensive lines in the NFL, and unlike teams like Miami and Los Angeles, they play a 3-4 scheme with bigger linemen. Consider that the Jets turned the ball over 8 times on the road in very tough venue in Kansas City and only surrendered 24 points. There are some surprising areas of weakness thus far in this Jets unit, but how the Seahawks matchup with their strength will likely be the key to the game.

It is not often that we are listing the run game as a weakness for the Seahawks, but through three games, they are 27th in the NFL in yards per rush and 15th in rushing yards overall. Running back Christine Michael is averaging much better numbers and will be getting the bulk of the carries. He will be facing a stout Jets run defense that ranks 3rd in the NFL in both yards against and yards per carry. Sheldon Richardson, Leonard Williams and Muhammad Wilkerson for a dynamic trio that give fits to every offensive line they face. I have also liked what I have seen of rookie linebacker Darron Lee.

This good run defense helps them rank well in opponent 3rd down conversions and red zone success as well. Both are areas where the Seahawks offense has struggled for the largely the inverse reason. Seattle reversed that trend last week against the 49ers, but it would be unwise to assume they will have equal success on the road against this Jets defense. The injury to Russell Wilson makes the run game that much more important for the Seahawks. If things remain status quo for both teams in terms of run offense versus run defense, the Seahawks offense will have some long third downs to convert.
Where the Seahawks can have some optimism is if Germain Ifedi does return to the lineup and provide more push in the run game. Michael has also been productive in every game this season. Nobody should be under any impression, though, that this is anything but a mismatch that the Seahawks will be hard-pressed to overcome.

One of the big surprises of the season is the poor performance of Darrelle Revis and the Jets pass defense. Pro Football Focus has him ranked 98th out of 104 cornerbacks so far. The secondary has surrendered seven plays of 30 yards or more, which ranks 29th in the league. They rank dead last in opponent completion percentage and 31st in opponent yards per attempt, yielding an ugly 9.1 yards per throw. As is so often the case, it is more than just poor secondary play leading to these big gains through the air. New York ranks 6th in the NFL in sack rate, but most of that came from their 7 sacks in week one. They have zero sacks and two sacks the past weeks, giving opposing quarterbacks time to let these deep throws develop.

Seattle has not shown clear strength in any offensive area just yet, but are showing emerging prowess in the deep passing game. Only the Redskins have more passes over 30 yards (7) the last two weeks than the Seahawks (5). The emergence of Jimmy Graham could play a key role in helping to threaten the Jets defense. Travis Kelce caught 6 passes in 7 targets for 89 yards and a touchdown last week for the Chiefs.
The much-maligned Seahawks offensive line has actually done a decent job in pass protection. Coupled with Wilson’s continuing growth in the quick passing game, the Seahawks are giving up a middling 5.9% sack rate to their opponents. New York has posted just a 3% sack rate the last two games. Expect them to test Seattle with an array of blitzes. Coaches and Wilson have familiarity with Todd Bowles system from his time in Arizona. He gambles, and the Seahawks have been able to punish them. Wilson absolutely must be willing to throw the ball away to avoid hits from this physical defense.
He and the offense must also avoid turnovers in a game where a cheap field goal off a takeaway could be the difference between winning and losing.

Everyone will be poking fun at Ryan Fitzpatrick this week after his abysmal performance against the Chiefs. Just remember what people were saying about Case Keenum before he played a serviceable game against the Seahawks the next week. Fitzpatrick is a better player than Keenum or Blaine Gabbert. He also has better weapons in Brandon Marshall, Eric Decker and Matt Forte. This Jets offense nearly had three 100 yard receivers in week two against Buffalo, along with a 100 yard rusher. They have potential to do damage, even if they have had a tough time doing it so far.

This Seahawks defense is legit. They can win this game themselves if they bring their best, especially if they can start creating turnovers. One could argue that the Jets defense has more of an advantage over the Seahawks offense than vice versa. New York has some strengths on offense, where Seattle has yet to truly develop any. This game will not go well if Seattle is unable to hold the Jets offense in check.

New York features three quality wideouts in Marshall, Decker and Quincy Enunwa. One of the more underrated matchups in this game is slot receiver Enunwa versus nickel corner Jeremy Lane. Enunwa leads the Jets in receptions with 17 and Lane has been fantastic so far this season. Seattle has a history of giving Decker fits, while Marshall has a history of doing the same to Seattle. He is one of only three receivers I have seen consistently beat Richard Sherman in a game (Stevie Johnson and T.Y. Hilton being the other two).

Fitzpatrick has faced the Seahawks twice in the past few years and struggled both times. He posted a 58.8 rating while throwing 1 touchdown and 2 picks when playing for the Bills in 2012 in a game they lost 50-17, and he had a 46.8 rating with 0 touchdowns and 2 picks for the Titans in 2013 when they lost 20-13 in Seattle. He has his work cut out for him there, but Seattle has been unable to create turnovers so far this year.
It is worth noting the Jets have been solid running the ball (9th in yards per rush and per game) and in 3rd down conversions (3rd). They also are second in the NFL in opponent sack rate. These are typically characteristics of a good offense. Their lack of points seems to come from struggles to convert in the red zone (28th) and their turnovers. They actually outgained the Chiefs last week 305 yards to 293 yards.
They must establish the run game in order to truly threaten Seattle. One thing to watch out for is Forte as a receiver out of the backfield. Seattle has given up some frustrating yards that way in the past, and Forte is an excellent receiver.

Seattle has been great at everything so far except for taking the ball away. Their run defense is even better than it shows due to the 49ers getting some garbage yards late last week. New York is extremely inefficient in their passing game, ranking 30th in completion rate and 21st in yards per attempt. The Seahawks are one of the toughest teams to throw on in football. If the Seahawks can bottle up the run, the Jets offense could be in for a very long day.

Teams that attack the middle of the field with tight ends usually have a better shot at hurting the Seahawks. New York is far more receiver-centric than most teams. That plays right into the Seahawks hands.

The only mismatch here is the Seahawks punt return game versus the Jets punt coverage. A special teams play could easily be the difference in this one.