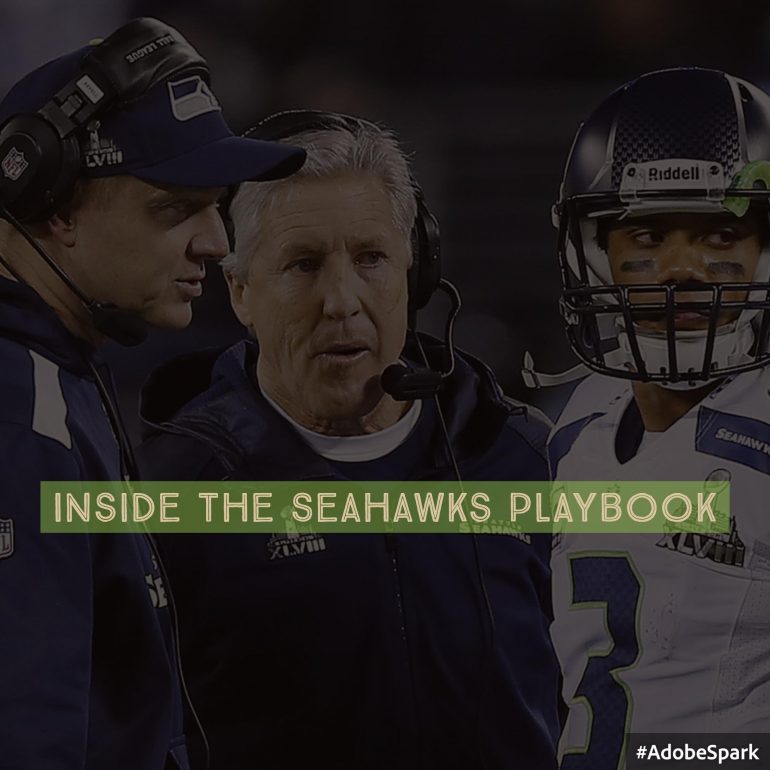 Inside the Seahawks’ Playbook: Rub Routes

In 2013, the Denver Broncos offense made a lot of noise. Peyton Manning threw 55 touchdowns and nearly 5,500 yards on his way to an MVP award. A large part of that record breaking season was simply due to their talent on offense, but Denver also attracted attention for their scheme. In particular, the Broncos became well known for their rub routes, or pick plays. Rub routes are an old concept, but Denver’s precision execution made the plays a favored tactic of a historic offense.

That historic offense would, of course, be derailed in spectacular fashion by the Seattle Seahawks in Super Bowl XLVIII.

Since that game though, Seattle has begun to rely more and more on rub routes. Against Denver in XLVIII, Seattle ran a single such play. Today, you might see as many as 5 in a single game. And, just like that Denver team that the Seahawks embarrassed, Seattle’s execution of these plays has become finely tuned. Rub routes have become a dangerous weapon that Seattle uses both on the goal line for touchdowns and in the middle of the field to gain big chunks of yardage.

Maybe Seattle’s most basic rub route is the one used for a touchdown on the game winning drive against Miami. The slot receiver runs a quick out, and the outside receiver runs a slant or spot route.

The execution here isn’t perfect. Jermaine Kearse is held and isn’t able to reroute the nickelback. The play is effective though, because the corner reads the rub and hesitates. The hesitation is because Seattle runs this both ways. The outbreaking receiver can also rub, getting separation on the slant route that the corner would be in position to jump. Here’s an example of Seattle doing exactly that.

Seattle doesn’t use rub routes just for short yardage. They also like to use them to create space for Doug Baldwin and Tyler Lockett.

Here Baldwin runs another shallow out underneath Lockett’s hitch and Kearse’s go route. Those two routes creates enough space for Doug to pick up about 15 yards, almost all of it after the catch.

(This also happens to be the same route combination Seattle used in the Super Bowl against Denver, with similar success.)

Doug runs a wheel under a slant and go by Kearse. Doug does a lot of the work to get separation on this play, but the slight reroute of the corner to avoid Kearse turns this into an easy pitch and catch for 34 yards. And of course, Seattle has a wrinkle on this as well. Here, the wheel route by Kearse goes over a quick in from Lockett.

What’s cool, and very important, is that none of the plays shown here are illegal. Pick plays have a negative connotation, but are perfectly legal. These plays would only be penalized if a receiver intentionally contacts a defender in order to block or disrupt them.

A well executed rub route, on it’s own, is difficult to defend. Seattle layers crisp execution with a varied implementation. The Seahawks have implemented the route combos across multiple personnel packages and formations. No two plays above are identical. Defenses must be ready for Seattle to run rub routes as well as have answers for the different ways that Seattle uses those route combinations. It’s a simple concept that Darrell Bevell has evolved to stress defenses in a variety of ways. (Although it’s not quite unstoppable.)

Rub routes are, of course, just one part of Seattle’s playbook. Defenses still have to account for Jimmy Graham in the end zone, Seattle’s vertical passing attack, a smash mouth run game, and the variety of threats that Russ poses with his legs. But the importance of rub routes as both a constraint and a dependable high leverage play call has earned them a significant place in the Seahawks’ offensive identity.