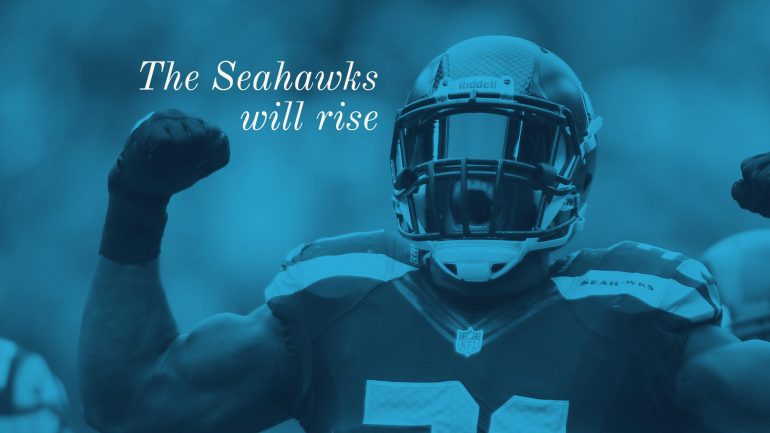 There is no silence on days like today. Even bated breath is interrupted by the percussion of rain drops. Mother Nature will soon succumb to the sounds of sport. Fifty-three men wake this morning with the goal of greatness. They have achieved it before. They can sense its presence. Bystanders cast doubt. They measure greatness by the obstacle instead of by the man. Their folly will soon be exposed. The Seahawks will rise today, not because another bird occupies the same sky, but because their wings allow them to reach an altitude that none can match.

Hidden by the absurdity of three meaningless touchdowns is a defense that has allowed less than ten points per game when the outcome was in question. They feature giants upfront, assassins at the second level and a legion at the back. Too many focus on their skill and talent when it is their trust that binds them into a greater whole. Any man can be beaten when he stands alone. There is only unity here. Red Rover would be unwise to send anyone over to test the tensile strength of this seawall.

Lurking in the shadows is a Seahawks offense that still does not know its own ceiling. They are the superhero who has only recently discovered his special powers. They are the younger brother who has tagged along with their big brother defense for years, on the cusp of realizing they can pull equal weight. Their nemesis has long been dominant defensive lines who create chaos where Seattle attempts to achieve synchronicity.  They have faced three such lines so far this year, and have come out better for it. No such line can be found to oppose them today. Like the trained martial artist who barely feels the resistance of the wooden board as his fist passes through, the Seahawks line is ready to show their power.

Now surround them with 69,000 energy amplifiers. Do it when doubters still exist. Do it when the cloak still obscures your gleaming armor. Today is the day when the Seahawks once again show who they are, and what they are capable of. There will be no silence.