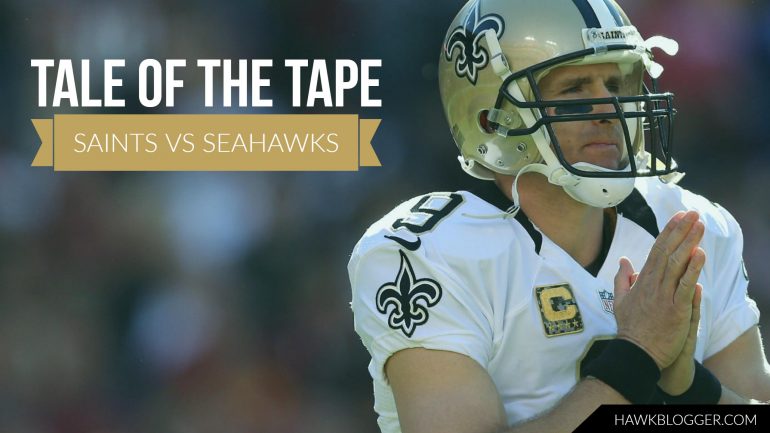 Tale of the Tape: Seahawks Offense Must Pull Their Weight Versus Saints

Be very careful. The Saints—sitting at 2-4 with one of the NFL’s worst defenses—look like easy pickings. They are anything but. Drew Brees has the New Orleans offense purring, and the Saints have been in every game they have played this year. The defense is atrocious, but the Seahawks offense has not exactly lit the world on fire. The Seattle defense just played a historically draining game, and cannot be expected to win this one on their own. It is going to take an awakening of the dormant Seattle offense to win in what will be Jimmy Graham’s homecoming.

This is the matchup that will decide this game. It will not be enough for the Seahawks to score a few points and lean on the defense. The defense needs to be able to lean on them this game. That means sustained drives and touchdowns, which require third down and red zone efficiency. This Saints defense has allowed 30 or more points to four of their six opponents. Seattle needs to be the fifth. This is not a good run defense. They are not strong on the interior line or at the linebacker spot. Yet, the Seahawks have been worse so far. They have been unwilling to run early in games, or stick with the run later. When they have run the ball, the results have been mediocre. There will be a temptation to use this game as a chance to establish their running game against a weak defense. That would be a risky decision. As bad as the Saints defense is, they are better against the run than the pass. New Orleans would likely welcome a Seattle game plan that featured the running game. Relying on what has been a weakness to outscore a dynamic Saints offense could be all New Orleans needs to get the edge.

Cameron Jordan is a solid rusher on the outside. He will make life difficult for either Garry Gilliam or Bradley Sowell’s replacement. Keep an eye on Nick Fairley as well, who will probably be working against Mark Glowinski.

This Saints secondary is in shambles. Their pass rush is one of the worst in the league. Seattle, despite their struggles, are an above average passing offense. This is a game where Doug Baldwin, Jimmy Graham, Tyler Lockett, and Jermaine Kearse should have their way. The Seahawks should be able to repeat, or beat, the display they put on against the hapless Jets secondary a few weeks ago.

One weapon they have yet to unleash is C.J. Prosise. This could be the game he introduces himself to Seahawks fans and the league. Four different running backs have had at least 40 yards receiving against the Saints this year. Football Outsiders has the Saints as the 31st ranked defense in defending passes to running backs at over 47 yards per game.

One would have to imagine that Graham will be the focal point of the attack. He has been the Seahawks most dangerous weapon so far, and one would have to think he wants to make a point in his return to New Orleans. Pete Carroll has always liked to give players the chance to exorcise demons against old teams.

Baldwin has faded into the background too much in recent weeks. The offense is at its best when they are targeting him early and often. He was targeted 27 times in the first three games this year, but only 18 times in the past three. Teams are likely adjusting coverages to take him away, but that did not stop him last season. This is far and away the Seahawks most dependable target. He has to more of a factor.

The Saints were already weak in the secondary to start the year, but have further thinned by injury. Look for the Seahawks to feature empty formations quite a bit to spread them out. There will be plenty of three receiver sets to try and keep them in nickel whenever possible.

The Saints offense has had 66 drives this season, per Pro-Football-Reference.com. They have scored on a third of them (22), tops in the league. Seahawks opponents have had 70 drives against them this year. Just 11% (8) have ended in a touchdown, tops in the league. This is an epic battle of strengths. If the Seahawks defense had not just set a record for longest time on the field in a game and needed intravenous fluids just to have the strength to walk to the team bus, there would be every reason to predict they would enforce their will on this offense the way they have in the past.

Drew Brees faced the Seahawks defense twice in 2013 and came away averaging just 11 points per game. They played better in the playoffs, piling up 409 yards (versus the 188 they had the first time), but were held scoreless until the fourth quarter. Brees did not throw a touchdown in that game until there were just a few seconds remaining. This Seahawks defense looks better than the one he faced back then, but they will be on his turf and at far less than their best. Talk about a seesaw. There are no significant advantages for the Saints on offense from a statistical perspective. They are a bit better in passing yards, but Seattle is every bit their match in passing yards per attempt. That just means the Saints pass the ball…a lot. Brees is a maestro in the pocket. He always knows where he wants to go with the ball, and is as fast as anyone in the NFL at going through his progressions. His accuracy is off the charts. If a player is open, he will find them.

Brandin Cooks and rookie Michael Thomas are nice receivers. Cooks is a compact route runner with explosive ability. Thomas is 6’3″ and has the more prototypical wideout body type. Brees targets these two the most, but he spreads the ball wonderfully to his full array of options. Seven different players have at least 18 targets on the year. Nine different players have receiving touchdowns.

The Saints will look to build on the modest success the Falcons and the Cardinals had in the passing game. Atlanta was able to exploit some communication breakdowns for a few big plays. Arizona, despite only scoring six points, had more explosive passes (9) against the Seahawks than any other team this year.

New Orleans has a really tough time running the football. They are facing one of the best rush defenses in the league. It is tough making a living passing the ball against the Seahawks. That is what the Saints will have to do. Mark Ingram is a fine runner, but will have trouble finding any room against a disciplined Seahawks front seven that is tackling as well as they ever have.

As good as Brees is, he is a gunslinger, and will throw the ball into harm’s way. He managed to avoid interceptions in the two games he played against the Seahawks in 2013, but do not be surprised if he throws a couple on Sunday.
Early indications are that Kam Chancellor is set to return this week. That would be welcome news for a defense that could use a set of fresh legs. Chancellor has been playing his best ball in years, and should elevate an already stingy secondary.
One of the more intriguing battles will come from the Seahawks pass rush going up against a team that has allowed only nine sacks on the season.

Seattle has at least 4 sacks in five of their six games. The Saints have not given up more than 2 sacks in any game.

New Orleans has succeeded not only with decent pass protection on the line, but with Brees being clever about moving inside the pocket and knowing when to get rid of the football. Seattle has pass rushers coming from everywhere. Seven different players already have sacks, five have 2 or more, and they are coming from the edge and the interior. The Seahawks have had success getting pressure with just four players, but have added the element of blitzing more this year than any prior year. Brees excels against the blitz. That will be a fascinating chess match to watch.

Seattle coverage units were the best they had been all season this past week. The Saints have a decent punt return game, so the Seahawks will be tested. There is an equally good matchup when the Saints are punting. Lockett has not looked like himself since the injury in week two. Seattle needs special teams to be solid and not give the Saints any short fields.