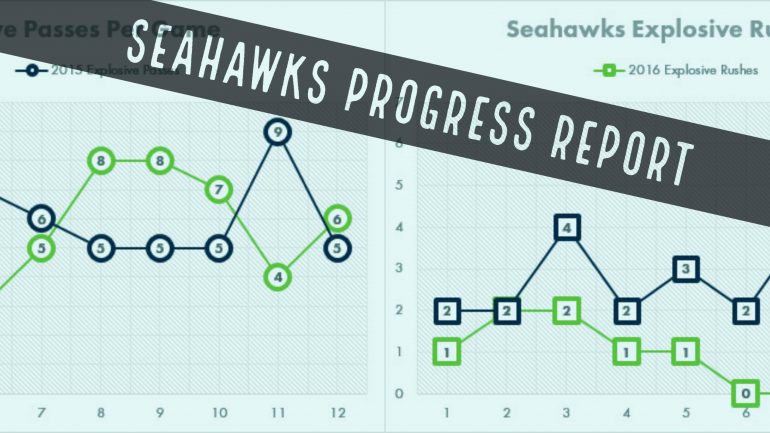 Seahawks Stats at the Three-Quarter Mark

And down the stretch they come… Twelve games into the 2016 season, and the Seahawks have penned a tale remarkably similar to their previous installments. Wobble early. Accelerate late. One might come to the conclusion that rope-a-dope is an intentional strategy employed by Pete Carroll and staff. Not quite. A significant aspect of his philosophy is to tolerate uncertainty and imperfection early in order to adjust and grow into an unstoppable force late. He would gladly win every game, early or late, but he would never be afraid to take lumps early if he was convinced it would allow them to finish the season as a better team. Carroll’s approach is more like The Borg. Initial attacks may work against him, but he is constantly assimilating new information, adjusting, and becoming more difficult to defeat. As we examine a few stats that stand out three-quarters of the way through the season, the evidence of Carroll’s adjustments is clear. Seattle is becoming harder to beat. Resistance may ultimately be futile.

This was arguably the Seahawks greatest weakness throughout the season. Most people agonize over the Seahawks pass blocking, but you can be sure that Tom Cable was fixated on the line’s ability to run block. It takes time to coordinate and create a rhythm across both linemen and runner. The return to health of Russell Wilson is a huge part of the rise, as he has 134 yards rushing (6.1 YPC) the past four games after having just 54 yards (1.9 YPC) in his first eight. Still, he only accounts for 22% of the team’s rushing yards since game number nine.

Thomas Rawls and C.J. Prosise were equally big stories. Rawls played in only three of the four games and had 201 yards while averaging 4.9 yards per run. Prosise exploded onto the scene and was averaging 6.8 yards per run before succumbing to injury against Philadelphia. His return would be a big boost come playoff time. Games remain against the stout Arizona Cardinals and Los Angeles Rams. We will know just how much this run game can be counted on before the season ends.

The cries of pain and suffering were heard near and far among Seahawks fans whenever the offense took the field for much of the season. Outside of a disconcerting return to bumbling and stumbling against Tampa Bay, the offense has shown signs of dominant life.

The Seahawks offense ranked third in total yards over the past four games and fifth in yards per play.

That Seattle was able to average 26 ppg and 410 ypg despite having a Tampa game where they scored 5 points had 245 yards demonstrates just how good they have been elsewhere. Take out that Tampa game, and the Seahawks averaged 32 ppg and 464 ypg against New England, Philadelphia and Carolina. Not bad.

You can see the valley the team entered after the Jets game, where explosive passes nearly vanished. They returned in the Bills game, immediately after Carroll announced that “things will look different” following a frustrating loss to the Saints where the team played conservatively to protect Wilson, according to Carroll. The run game had been largely a non-factor when it came to explosive plays, which should come as no surprise given it was a non-factor in any type of play for most of the year.

The offense took off over the second half of the season last year. The charts above show how the offense this year is tracking against that record run. The passing game has generally been more explosive. The running game has lagged behind.

When you total things up, you see a Seahawks offense that is looking quite similar to what we saw last year at this time.

I have written before about the penalty problems facing the Seahawks. Richard Sherman has been open about his perspective regarding the tough calls that seem to go against Seattle. Somewhat silently, penalties against the Seahawks have receded over the past four weeks.

One might think it was because habitual line-stepper Michael Bennett has been out and unable to jump offsides, but that did not help the team avoid 11 penalties against the Saints or 10 penalties against the Bills. Seattle committed just six penalties for 37 yards in this last game against the Panthers even with Bennett performing his perfunctory offsides in his return to action. It may be a momentary glitch in the otherwise flag-ridden Seahawks reality, or it may be another sign of growth among young players.

One thing that has to stop is veteran Bradley Sowell’s false starts. He has done it four times this year even while missing a number of games. That ranks fifth in the NFL. He had two in the last home game. False starts, in general, are the biggest penalty issue for the Seahawks. They rank fifth in the league in false starts with 19 on the year, per NFLPenalties.com. Those are negative plays the offense can almost completely eliminate with discipline.

One important metric that is trending the wrong way for the Seahawks is their ability to convert pivotal situations and keep their opponents from doing the same. Early in the season, the Seahawks were leading the NFL in third down defense. No longer. They rank near the bottom of the league. Similarly, their red zone efficiency on offense was healthy, but has become sickly of late.

A positive differential between you and your opponent in situational football is often the difference between winning and losing. Inefficiency in these moments indicates sloppier play and can sometimes indicate a lack of focus or communication.

By comparison, the red-hot Seahawks offense during the second half of last season converted 56% of their 3rd downs (compared to 37% over these last four games) and 69% of their red zone chances (versus 38% in these last four). This is perhaps the most important area left for the coaches and players to refine before heading into the postseason. They must have supreme confidence in their ability to execute in these moments to maximize their potential this year. 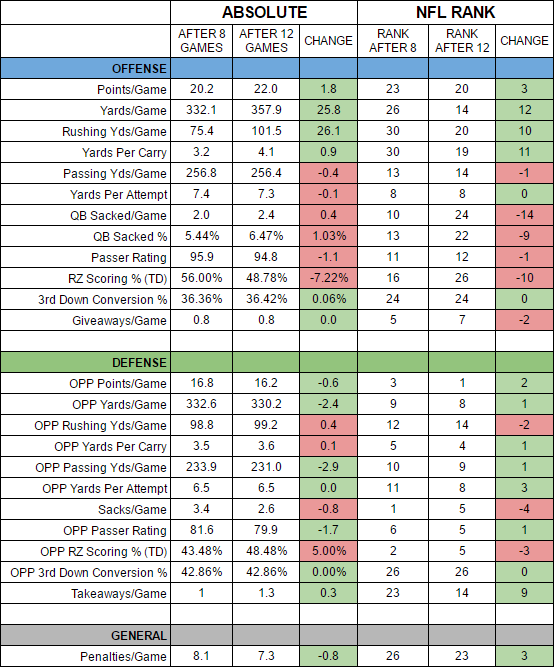