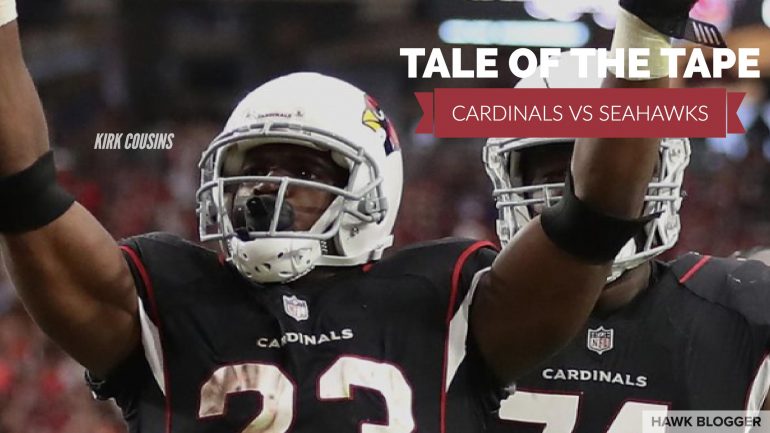 Tale of the Tape — Seahawks Much Better Than Cardinals, Must Prove It

Last weeks Tale of the Tape told us the Redskins were a tougher matchup than Seahawks fans wanted to acknowledge. This week it tells us the Seahawks should crush the Cardinals. There is one specific aspect of Arizona’s game that could lead to an upset if the Seahawks do not patch what has become a serious issue.

This Cardinals defense is not what it once was. Calais Campbell has taken his talents to Jacksonville. Young pass rusher Markus Golden is out for the season with an injury. Tony Jefferson left for Baltimore. Before facing the lowly 49ers offense, this group had given up over 30 points in three straight games. In fact, take out the two games against San Francisco, and the Cardinals have given up 28 points or more to four straight non-49er opponents, “good” for 32 points per game. The only teams not score 28 or more points against this defense are the Colts and the 49ers. That’s it.

Meanwhile, the Seahawks offense is now ranked fourth in the NFL in yards per game. That is mind-boggling, considering how frustrating that group has been to watch for most of the season. There is every reason to think this is a mismatch on this side of the ball, but let’s take a closer look. Arizona is a stout run defense. Most teams have hurt them primarily through the air, but they have held up against the run. Seattle struggles in this aspect of their game, but did show some signs against Washington. Given that Seattle still seems to have no idea who they are on offense, Arizona could benefit from Seattle getting too pig-headed about running the football and matching their weakness to Arizona’s strength.

Chandler Jones is a great pass rusher. He probably will line up opposite Duane Brown, which is a great relief for Seattle, but should they choose to flip him over to the left side to face Germain Ifedi, that could be an issue. Corey Peters has played well this year at defensive tackle and could give Ethan Pocic trouble.

Arizona has struggled mightily on third downs and in the red zone. Seattle has been at its best on third down. That could be a pivotal factor today. Similarly, the Seahawks passing offense has been productive and explosive. Those are two things the Cardinals have had trouble contending with.

Given the Seahawks improved and still improving pass protection, and the Cardinals limited options rushing the passer, look for Arizona to take chances with aggressive blitzes. That could open up the opportunities for big plays for Seattle.

Without Carson Palmer or David Johnson, this offense is severely limited. They have talented receivers, but Drew Stanton has a tendency to throw to the wrong team. Adrian Peterson has put up some big rushing yards, but not against a good defense. Arizona’s offensive line is significantly worse than the Seahawks. That is true by almost all measures. The lack of Earl Thomas is always a factor, but Seattle should have what it needs to dominate. One thing, though, could undo them. Stanton is not a good quarterback, but he can hit the deep ball and Bruce Arians will always throw it. They have the receivers to get behind defenses and the Seahawks have struggled lately to contain the explosive pass play. It doomed them in the end against a Redskins team they should have held below 10 points.

The secondary cannot let the Cardinals have repeated success getting behind them. Keep the Cardinals from getting meaningful deep passes and this game likely will not be close. Fail to do that, and Seattle could lose it.

This is a game where the Seahawks defense has enough of an advantage, and the Cardinals are desperate enough to create big plays, that Seattle should get some turnovers. The Seahawks pas rush is gaining steam. Dwight Freeney has been fantastic through two games, and Seattle welcomes Dion Jordan to the mix tonight. The Seahawks defensive line should win this game, with some help from the like of Bobby Wagner and K.J. Wright.

Arizona has struggled a ton in punt coverage. Could this be the game Tyler Lockett breaks out?