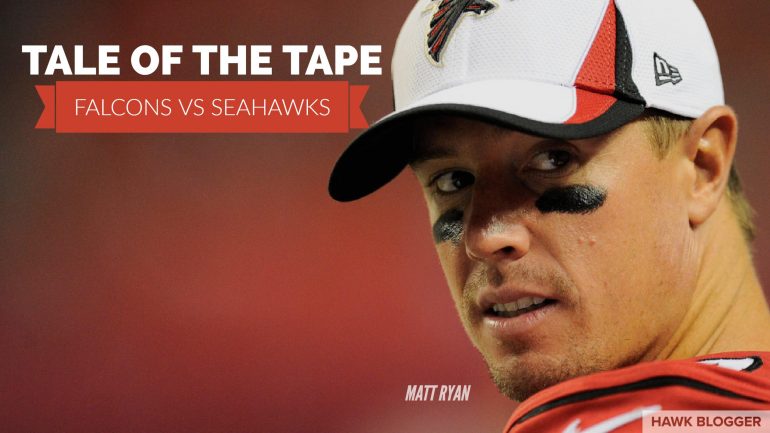 Tale of the Tape — Seahawks Must Play Better to Beat Falcons

This has been a tough week for Seahawks fans. Rarely has a win felt so much like a loss. Richard Sherman is out for the year. Kam Chancellor may be done for longer if the tests on his neck come back with similar results as Cliff Avril. It is unknown whether Duane Brown will play. The overall offensive line play took a step back, and Russell Wilson has played two inconsistent games after appearing to have found his groove the weeks prior. The Falcons have far fewer injuries, and have a greater urgency around this game due to their modest 5-4 record. They may be the better team, the healthier team, and the more motivated team. It will take a far less muddled performance by the Seahawks to win on Monday night. The Falcons defense has been pretty consistent all season. No team has scored more than 26 points against them, and the only offenses to manage over 350 yards were led by Aaron Rodgers and Tom Brady. They have quality players at all three levels of the defense who are strongest in defending the pass, but are not pushovers in the run game.

Adrian Clayborn is getting the hype this week after a remarkable six sack performance against the Cowboys. Vic Beasley, Brooks Reed, and Takkarist McKinley are skilled pass rushers as well. De’Vondre Campbell and Deion Jones are excellent young linebackers and Keanu Neal is a tough-nosed safety. All three primary corners are solid. Atlanta has the personnel and the coaching to slow down the Seahawks offense, which has not necessarily been a tall order of late.

There is only one true advantage for the Seahawks, and it is a meaningful one. Seattle has done a good job of protecting the football this season, and the Falcons have done a lousy job of taking it away. In particular, the Falcons have been terrible at intercepting passes, ranking 31st in the league in interception rate. Seattle needs for that to continue if they want to have a real shot at winning this game.

One hidden advantage in this game for Seattle might be the element of surprise. Running back Mike Davis was signed off the practice squad, and nobody has seen him play, so there is no way for the Falcons to know how to prepare for how the Seahawks will use him. There is also a small chance that Luke Joeckel will return this week, which could shuffle the line and changeup the Falcons plan of attack. Much has been written about the Falcons giant step backwards on offense this season. A little perspective should be infused into that discussion. Yes, they are not putting up the record-breaking numbers of a year ago, but they are 4th in the NFL in yards per play. They have shown incredible balance in being 5th in yards per carry and 5th in yards per pass. They are also 6th in explosive passes and 4th in explosive rushes. That is far from a disaster.

Matt Ryan is a smart and dangerous quarterback, and his weapons are still incredibly dangerous. Julio Jones was a handful for Richard Sherman. He should have a lot of success against Jeremy Lane, who I expect the Falcons to try and target far more than Shaquill Griffin. Taylor Gabriel is a homerun threat. Mohamed Sanu is a tough receiver with good hands. Tevin Coleman looks like he will take over the majority of the snaps at running back if Devonta Freeman cannot go, and Coleman 4.8 yards per run.

If Earl Thomas does not play, this could get ugly. If he does, the Falcons offense would still appear to have an advantage over the Seahawks secondary.

The Seahawks pass rush is getting more and more interesting. Dwight Freeney had two sacks against the Redskins, and then Dion Jordan added a sack and three QB hits against the Cardinals. Frank Clark and Michael Bennett should make life difficult on the right side of the Falcons line. Tackle Ryan Schraeder and right guard Wes Schweitzer are vulnerable in pass protection. A healthy Jarran Reed would help, but Nazair Jones has proven he can step in and be a factor as well.

Believe it or not, the Seahawks run defense has climbed into the top ten, and is 5th in the NFL in limiting explosive running plays after starting the season near the bottom of the league. That will be crucial against this offense. An effective running game for Atlanta would greatly reduce the Seahawks chances, as their secondary will already be reeling without Sherman and Chancellor.

The Seahawks defense can help make a win possible by limiting the run and creating enough pass pressure to generate some turnovers. Atlanta has had some trouble with giving the ball away this season.

Not much of a story on special teams. The Falcons are great in coverage, but the Seahawks are not that great in returning anyway. Falcon kicker Matt Bryant has been battling some injuries, and that could be a factor on what is likely to be a rainy Monday night.