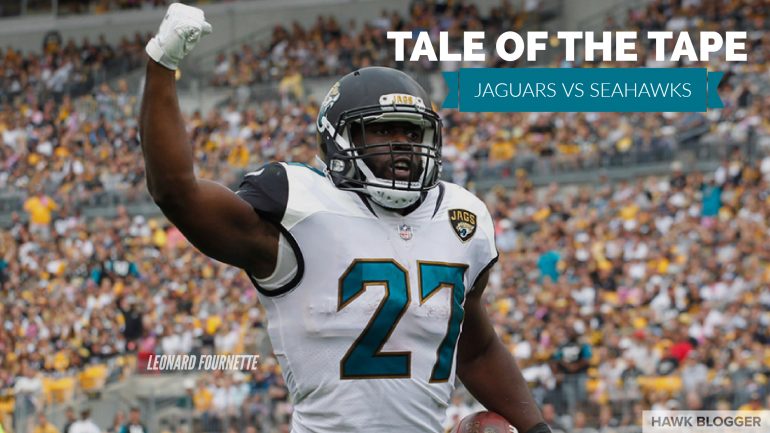 Tale of the Tape — Blake Bortles is Favored to Beat Seahawks. Should He Be?

The narrative had been set nationally. The Seahawks were being put out to pasture. Their time was done. A 10-1 Eagles team with seemingly no flaws was going to beat the Seahawks in their own stadium. Statistics backed up that sentiment. Philadelphia was rightfully a prohibitive favorite. How times change. Seattle put a massive dent in their coffin with a wire-to-wire and complete victory over the Eagles, but the time to savor that victory is nearing an end. They face what may be an even tougher test this week against a dominant Jaguars defense in Jacksonville. This is a group that picked off Ben Roethlisberger five times in Pittsburgh, and left him wondering aloud if he was still able to play in the NFL. They are capable of winning games single-handedly, and have done so on multiple occasions this season.

There are more ways for the Jaguars to win this game than to lose. This is their Super Bowl. That defense will be as cranked up as they can be. For Seattle to walk out of there with a victory will require three things: taking care of the football, avoiding penalties, and taking the ball away on defense. The Seahawks used that formula to beat the best team in football last week. They will need to rediscover it this week. 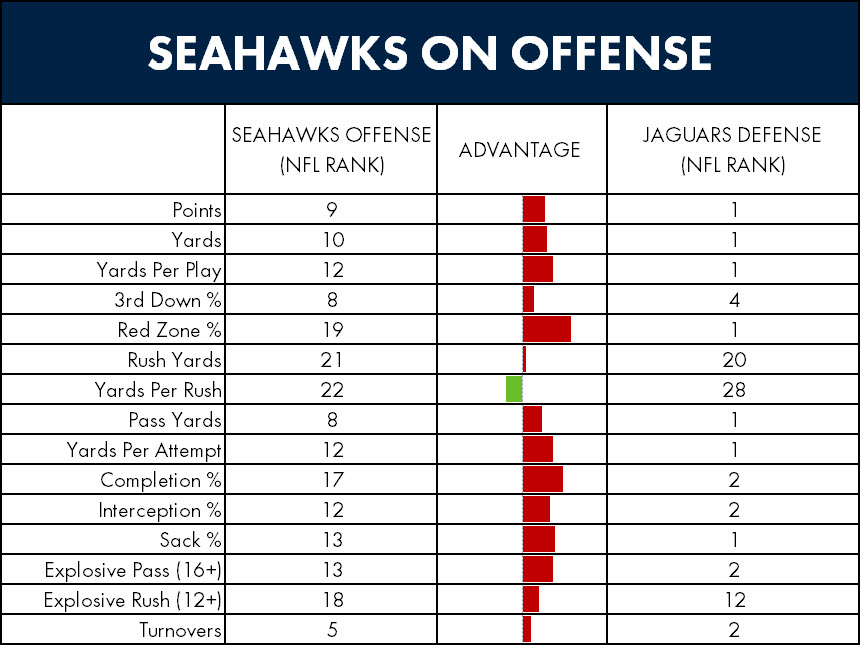 This is the most talented defense in football. Baltimore gives them a run for their money in the debate for best defense, but every GM in the NFL would take this young Jaguars defensive roster over any other out there. They legitimately deserve to be compared to the 2013 Seahawks defense. As good as the Eagles defense is, they came into the game last week ranked first or second in 3 of the 15 categories I track in these matchup previews. The Jaguars rank first or second in 11 of the 15, and are 4th in another. ProFootballFocus gives players a color-coding based on their grades. Players over 90.0 get a blue chip rating. There are just 28 blue chip defenders across the whole NFL. Jacksonville has four of them.

It starts up front with a nightmare-inducing defensive line. Calais Campbell haunted the Seahawks for years in Arizona, and is having his best season in Jacksonville. He is third in the league with 12.5 sacks, and is joined by Malik Jackson (6.0 sacks), former 3rd overall pick Dante Fowler Jr. (6.5 sacks), and Yannick Ngakoue (10.0 sacks). They also have former All-Pro defensive tackle Marcell Dareus, who was brought in to help shore up their run defense. That’s just their defensive line.

Telvin Smith is an elite linebacker who has 10 tackles for loss, 5 passes defensed, 3 interceptions, and more touchdowns (2) than Tyler Lockett (1) this season. He missed the last game with a concussion and is questionable for this game as well. Myles Jack is an ultra-athletic linebacker, who would be a highlighted young player on most teams, but is just one of the guys here. Paul Posluszny is an excellent tackler, and is having a strong year. That linebacking crew, by the way, qualifies as the weakness of this defense.

The secondary features two shutdown corners on the outside. Jalen Ramsey is long and athletic. He leads the team with 16 passes defensed. A.J. Bouye is feisty and talented, and is tied for the team lead with four interceptions. ProFootballFocus shows Bouye as allowing an NFL-low 38.0 passer rating on passes sent his way. Ramsey is seventh, allowing a 52.7 rating. Safeties Tashaun Gipson and Barry Church are also very good at what they do. Gipson has four interceptions and Church has two. Only one team has thrown for more than 236 yards against this secondary, and that was the Steelers (301 yards) who paid dearly for their aggressiveness. Respect this group at all costs. Let them get their hands on the football, and Seattle’s chances of winning go down precipitously.

Like a boss at the end of a level, the Jaguars have one weakness. They struggle to stop the run. It makes no logical sense with that front seven, but it is the truth. It has been better with Dareus in tow, but the Colts just ran for 141 yards last week, and the Cardinals ran for 108 yards the week before.

Just four teams have scored more than 17 points against the Jaguars. Each has won. Those teams averaged 171.3 yards rushing.

The Seahawks run game has shown some signs of life, especially with the return of Mike Davis. He has created four plays of at least 20 yards since he was brought up from the practice squad, and figures to be a key player on Sunday. Seattle’s leading rusher, Russell Wilson, will have to wisely use his legs as well. This is not the game where Seattle can expect to have Wilson drop back 40+ times and expect good things to happen. Odds are that one of those throws would end up in the wrong hands. This is the game to hunker down and play conservatively. Think about how the Seahawks beat the Rams in Los Angeles. They will need a similar script here.

Jacksonville has not faced a mobile quarterback like Wilson this season. The closest might be Jacoby Brissett or Marcus Mariota, but neither is in Wilson’s class this season. Teams that have succeeded through the air against Jacksonville have done so with their slot receivers over the deep middle of the field. That is what Arizona did. Their passer rating was 40 or below toward the sidelines when going against those edge corners, but was a sparkling 158.0 on three passes over the deep middle, including a 52-yard touchdown. Doug Baldwin will have his chances. Jimmy Graham may as well.

It is worth noting that Jacksonville is rated as the worst home field advantage in the NFL by TeamRankings.com, and there has been a league low one false start by opposing teams there this season. Seattle has had their strongest stretch of clean play the last two weeks where they set a season low in penalty yards against San Francisco and then set a season low in penalties against the Eagles. That would be a huge benefit this week against a defense that makes every yard difficult. 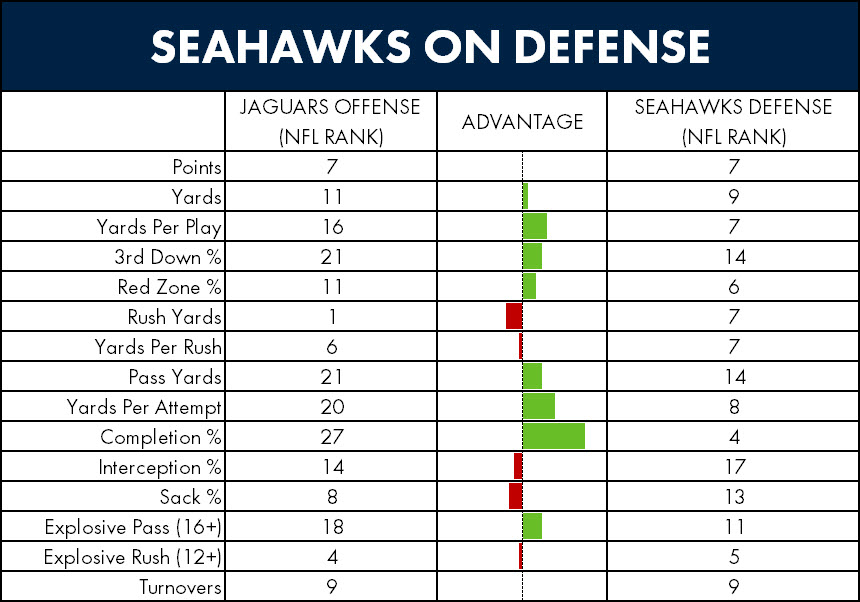 Jacksonville has yet another #1 ranking on their ledger, this time on offense. They are the most productive rushing team in the league. Rookie Leonard Fournette has 822 rushing yards on the season and 8 total touchdowns. The Jaguars put a ton of weight on his shoulders.

SharpFootballStats.com shows the Jaguars most frequent play on 1st and long (8-10 yards) is a run with Fournette. They have done that 107 times this season. The next most frequent is a run by Chris Ivory (51 times), who replaced an injured Fournette for a few games. After that, it’s a pass to Allen Hurns (19 times). On second down, the most frequent play? A run by Fournette (75 times). A pass to Marquise Lee is second most common (33 times), but you get the point. This team runs Fournette early and often.

Jacksonville is a committed run team, but they are facing a Seahawks run defense that has been the best in the football over the past seven games. They are allowing less than 3.1 yards per carry in that span, and they just held the second-best rushing team in the league to under 100 yards. There have been only three times this year when the Jaguars were held under 100 yards on the ground. They are 1-2 in those games. Their only win was over the hapless Colts.

Guard Patrick Omameh has missed the past three games and Fournette has been struggling a bit with an ankle injury. The Jaguars offensive line is nowhere near the group Philadelphia ran out there. Sheldon Richardson, Michael Bennett, Frank Clark, Bobby Wagner and crew have everything they need to shut down this run game. Jacksonville will keep hammering away.

They need to take as much pressure of quarterback Blake Bortles as possible because as much as the Jaguars defense can single-handedly win a game, Bortles can single-handedly lose one. Believe it or not, he has the same number of interceptions this season as Wilson (8). Although, he has done it in 60 fewer attempts. Bortles is a highly inefficient quarterback, who has a passer rating of just 83.2.

He has been missing his best receiver in Hurns for three games, and it is unclear whether he will be back for this one. Seattle needs to watch out for Bortles scrambling. He has 284 yards on the ground and that is not a fluke. He has been a runner throughout his career. His legs are what made the game in Arizona close. He rushed for two touchdowns and 62 yards.

Seattle’s front seven needs to overwhelm the Jaguars line, and force Bortles to make rushed decisions. Getting two turnovers could be the difference in this game. It would be nice for Shaquill Griffin to get his first back in Florida.

The Rams beat the Jaguars in Jacksonville by running the ball well, and getting big plays on special teams. The Jaguars special team unit is not good. They are challenged in both punt and kick coverage. Lockett could play a pivotal role.