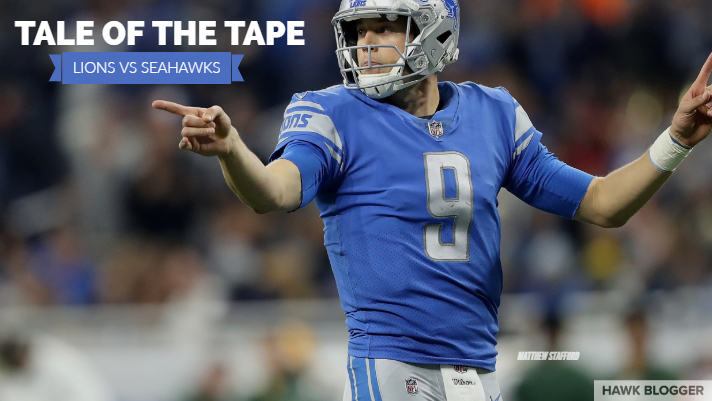 Tale of the Tape: Lions Shore Up Glaring Weakness Ahead of Seahawks Clash

Here we stand at a pivot point in the Seahawks season. Even is their record. Ascending is their level of play. Enter the Detroit Lions. A team that started their season getting blown out by a rookie quarterback and the New York Jets and then became the only team to lose to the San Francisco 49ers. They have rebounded to beat the Patriots, Packers, and Dolphins, while losing a close one to the Cowboys. Both teams can make a strong case that they are a different team than the ones that exited the first two weeks of the season without a win.

Detroit gets the benefit of playing at home, and also made a big trade (literally and figuratively) this morning to acquire former All-Pro defensive tackle Damon Harrison from the New York Giants. That move should go a long way toward addressing a major weakness on the Lions defense, and could play a significant factor in a game against the suddenly run-centric Seahawks. This begins a stretch of five straight tough games for Seattle. It is not hard to make the case that this game is the most winnable of the bunch. Lose on Sunday, and the playoffs became far less likely. Win on Sunday, and the Seahawks will have crossed another threshold on the journey toward relevance in the NFC.

This game feels as much like a toss-up as any we have seen this season. In games like that, the edge goes to the home team. The Lions pass rush is sneaky good. Devon Kennard has 5.0 sacks, Romeo Okwara has 4.0, and guys like Da’Shawn Hand are creating interior pressure. The Seahawks sack rate ranking is misleading. They are one of the best teams in the NFL at pass blocking over the past four weeks in terms of pass block efficiency. Even in sack rate, they rank 17th since week three of the season. Detroit represents a significant challenge. Even with Germain Ifedi’s improvement, this is the type of game where he could wind up as the goat between the Lions edge rushers and the crowd noise. Expect the Lions to try and get Seattle into obvious pass situations and attack the right side of the line.

Before this morning, I would tell you the Seahawks have a tremendous advantage in the run game. Take a look at the Lions run defense even over their more successful last four weeks: Teams have been thrashing the Lions run defense, especially around the left side. Detroit is dead last in yards per carry allowed and 30th in rushing yards allowed. Seattle has to be salivating at the thought of slowing down that pass rush with a steady diet of run plays and then play action shots against a very suspect secondary. Harrison is one of the best run defenders in the NFL, and gets inserted right in the middle of this Lions defense.

Interestingly, the Lions have not struggled as much to defend runs up the middle, where Harrison is likely to be most impactful. Whether Seattle will test the edges is a key tactical decision. Russell Wilson has yet to carry the ball on a neutral script first down rush so far this season after accounting for 20% of those plays in each of his healthy seasons.

Maybe this is the game where Seattle unleashes Wilson a bit more, and takes the Lions by surprise.

Seattle also has some real advantages in the passing game. If Doug Baldwin is back to being even 80% of his former self, David Moore continues his rise, and Tyler Lockett just keeps on keeping on, there should be big plays to make against a secondary without any particularly talented players. Darius Slay has been torched this year, giving up 4 touchdowns and being called for 3 penalties. He has allowed a 114.7 passer rating. Here is the top six players on the Lions in terms of coverage snaps and their passer rating allowed:

That’s…uh…not good. Any semblance of a run game should unlock some big plays for the Seahawks through the air, and should they fall behind, Wilson should still have a chance to put up big numbers if the offensive line can do their part. Matthew Stafford and his receiving crew of folks like Golden Tate and Kenny Golladay are legit. They are tough to stop. What has really unlocked this offense is the play of rookie running back Kerryon Johnson. He has been incredibly impressive, and currently has a gaudy 6.4 yards per carry. That rushing attack piled up 248 yards last week in Miami, helping to pave the way for 457 total yards and 32 points. The Seahawks run defense has been inconsistent. There is very little chance Seattle wins this game if they cannot slow down the Lions rushing attack.

Watch out for Golden Tate against Justin Coleman. Coleman has had a terrible time with tackling this season, and Tate is one of the best tackle breakers at the receiver position in the league.

The Seahawks secondary has managed to do a great job taking the ball away from opponents. The Lions have not had a turnover in three games. Detroit has a pretty good pass-protecting line. Seattle showed some ability to create pressure last week against a terrible Raiders line. If they can do even half as well this week, it increases the chances the secondary can make a turning point play.

Special teams could play a meaningful role. They are playing in a dome, and the Seahawks have an advantage in the punting game.