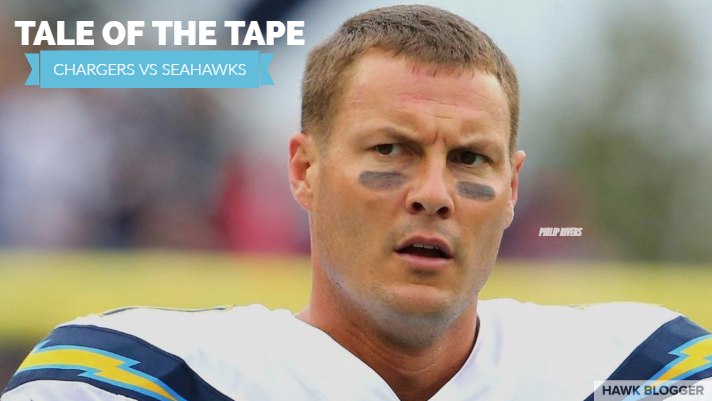 Tale of the Tape: Two Teams Without a Quality Win Face off in Seattle

You are what your record says you are, or so Bill Parcells used to say. The Los Angeles Chargers are 5-2, which is pretty darn impressive. Everyone knows there can be a fluky game or two, but winning five of seven has to mean they are good, right? Well…about that. The Chargers have had the good fortune to play five really bad teams that they have beat and two really good teams they have not. Take a look at their strength of schedule (green is easy, red is difficult) The toughest team they have beaten this season is the 25th-ranked Tennessee Titans, who they beat by a single point. Before Seahawks fans get too cocky. Take a look at the same view of the Seahawks schedule. The best team the Seahawks beat was the 20th-ranked Dallas Cowboys. Every quality team Seattle has faced has beaten them. Neither team entering this contest has proven they can beat a tough opponent. You may have also noticed that will change for one side this week as both Seattle and Los Angeles are ranked in the top ten. The Chargers have a cadre of offensive weapons. The Seahawks are far more balanced. Philip Rivers is playing the best football of his career and has tortured the Seahawks even during the peak Legion of Boom seasons. Russell Wilson, Chris Carson and this Seahawks offensive line demonstrated how to keep a powerful offense on the sideline last week in Detroit, and the Seahawks get to play just their third home game of the season.

This one should be entertaining or stressful depending on your mentality. A Seahawks team playing great football coming home is a handful for any team to beat. Melvin Ingram is a very good pass rusher. He can rush from either side, and you have to think they will try to match him up against Germain Ifedi. No longer is that a terrifying prospect, as Ifedi is the 8th-ranked pass blocking offensive tackle in the NFL since week three of this season. Still, great pass rushers are always a threat. Derwin James is an impact rookie safety for the Chargers who I really wanted the Seahawks to get with the 18th pick. Gus Bradley and the Chargers nabbed him with the 17th pick and have to be thrilled with the early results. He has as many sacks as Ingram, and has been excellent in coverage. Old friend Brandon Mebane occupies the middle of the Chargers line. Desmond King II is having a great season at corner.

The Chargers have been somewhere between a middling and a bad run defense all season. Mebane is not the difference maker he once was. The linebacking crew is suspect, and a number of players have had trouble with missed tackles. Linebacker Denzel Perryman had 9 missed tackles, James has 7, King II has 7, and safety Jahleel Addae has 6 so far. To put that into perspective, Seahawks corner Justin Coleman, who has struggled mightily with tackling this season, has 6 on the year. Overall, ProFootballFocus has the Chargers as the second-worst run defense in the league. Even if they are bottom-third, that represents a D.J. Fluker-sized advantage for the home team.

Seattle has also been dominating third downs of late. They are converting an eye-popping 59% of their third downs in the last three games. The Chargers are one of the worst third down defenses in football. The combination of the rushing advantage and the third down advantage could create the perfect recipe for another game of keepaway from a powerful opposing offense.

This group would appear more susceptible to the Moore jump ball than the run past you bomb over the top. You know Rivers. You probably know Melvin Gordon III at running back. You may even know wide receiver Keenan Allen. A name you may not know is Austin Ekeler. Ekeler is a second-year running back out of little known Western State Colorado who is an absolute terror for opposing defenses. He is a big play runner and a big player receiver. His numbers are not completely incomparable to someone like Alvin Kamara of the Saints. He is averaging 5.8 yards per carry as a change of pace to Gordon. He is also a guy Rivers is certain to target for those incredibly aggravating dump-off passes that go for 15 yards against the Seahawks defense.

Rivers has proven he is patient enough to live with underneath throws against the Seahawks, and then will give his big tight ends chances to make contested catches in the red zone. Allen is a great receiver who will cause problems, but watch out for rookie Mike Williams down the field. He is tall and is a great leaper who is averaging over 18 yards per catch and already has 4 touchdowns.

There is some question about whether Gordon will play in this game as he returns from a hamstring injury. He is a threat on the ground and through the air. This offense is a handful.

What the Chargers do not do well is pass block. Guard Dan Feeney is atrocious. He ranks 77th out of 79 guard in pass blocking by PFF. The other guard, Michael Schofield III, is middling at 37th. Right tackle Sam Tevi is 68th out of 79 offensive tackles. There will be plays to be made for guys like Dion Jordan, Jacob Martin, and Frank Clark. Pressure is not enough, though, as Rivers has a remarkable record thus far when passing under pressure. He leads the NFL with a passer rating over 118 in those moments, actually higher than when he has a clean pocket to throw from. That is nuts. My guess is much of that is due to the dynamic nature of his running backs available as emergency dump-offs. The Seahawks must bring him to the ground.

The Chargers have struggled mightily in the kicking game this season, although their replacement kicker has done better than injured starter Caleb Sturgis. Seattle has yet to uncork a big return this season, but this would be a good team to do it against as Los Angeles has been awful in defending returns.