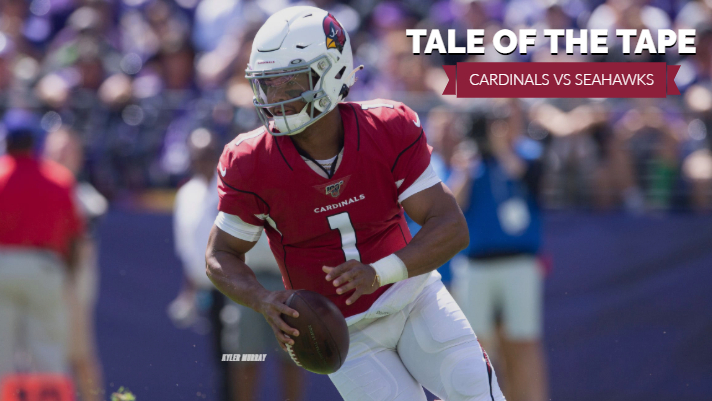 Tale of the Tape: Seahawks Biggest Obstacle is in the Mirror vs Cardinals

Many folks talk about going to Arizona being a house of horrors for the Seahawks. As someone who has gone to a number of games in that stadium, including the Super Bowl, it does not feel that way to me. I remember Marshawn Lynch have his mini-quake run, Russell Wilson having a long run of his own and carving up the Cardinals defense, and Doug Baldwin making one of the more improbable catches you will ever see. In all, the Seahawks have not lost a regular season game in Arizona for the past six seasons.

The last time they did lose was in Wilson’s rookie year in his very first professional game. Even then, they had a chance to win it at the end and Baldwin could not quite hold on as his face mashed into the turf and his teeth broke through his lip.

Arizona has fresh blood, with a new coaching staff and top overall pick at quarterback in Kyler Murray. Murray looks like a great player who will be a great rival in the division for years to come. The Cardinals have looked like a pretty bad team thus far, though, and have to be looking at this game as their chance to win their first of the season. A loss to Arizona would take all the joy out of a 2-0 start for the Seahawks and raise real questions about their ceiling for the season.

They fumbled one away this past week, and must find a way to keep their good fortune going in Arizona.

Chandler Jones is a force to be reckoned with on the edge. Seattle did a decent job against Cameron Jordan last week, so there is some hope they can contain Jones as well. Terrell Suggs gives the team a veteran pass rusher on the other edge as well. Corey Peters is a solid interior defender.

Seattle has been one of the more explosive offenses in the league, while the Cardinals have surrendered a ton of big plays. The team is missing cornerback Patrick Peterson, who was suspended for the first six games of the season.

There are some familiar faces in their secondary with Budda Baker and Byron Murphy both starting and playing reasonably well. This should be a good matchup for D.K. Metcalf given his size advantage.

Tyler Lockett has turned it on after a slow first game. Arizona is not particularly good at anything on defense, so Seattle must exploit their weaknesses and put up at least 25 points.

David Johnson remains a force, and young tight end Maxx Williams has been playing well. Murray can create with his legs and his arm. He can make life difficult for the defense regardless of the talent on his side of the ball.

The Seahawks missed a whopping 16 tackles against the Saints, making Alvin Kamara look like twice as good as he is. They have their work cut out for them with Johnson.

Arizona is a poor offensive team, but struggles the most in the red zone where they rank 30th in the NFL in scoring touchdowns. That could bode well for a Seahawks team that is tops in the league in converting their own red zone chances.

Seattle has one of the best run defenses in the NFL, and as long as their tackling returns to normal levels, could force Arizona into a lot of 3rd and long situations with the hope the pass rush can finally get home. Arizona is 29th in the NFL in sacks per dropback allowed to opponents.

The Seahawks also have one of the top defenses in limiting explosive plays, which means the Cardinals will need to be disciplined in moving the ball down the field.

Jason Myers has not hit a field goal yet, but has only tried one. Michael Dickson has ceased to be a major advantage, and is now among the bottom third in the league in net yards per punt. Arizona has a decided advantage in that phase.