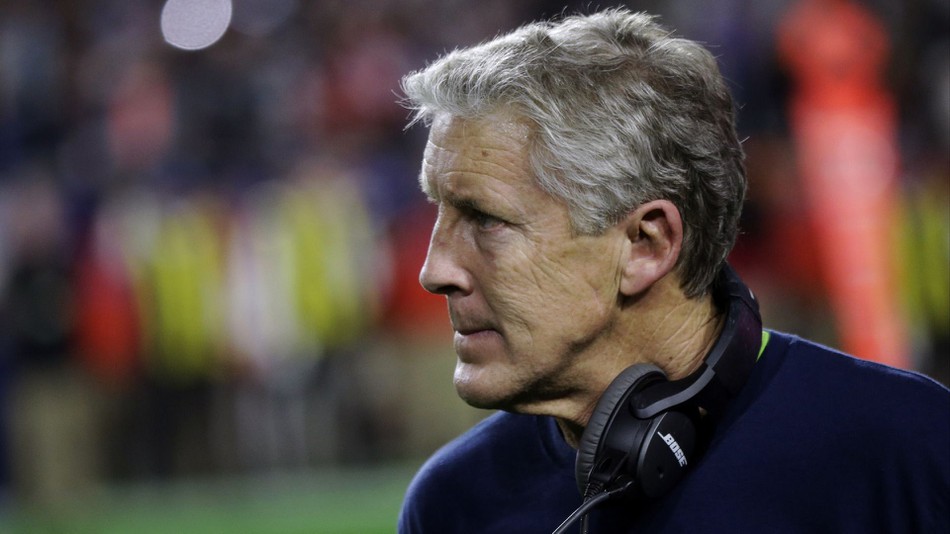 Narrative Of The game:

Seattle’s defensive secondary was bombarded by Andy Dalton and some big miscues last week. This allowed speculation and fear that Seattle would struggle against their week 2 and 3 opponents. Oddly, no real discussion arose about the unsettled defensive line or the insistence on rolling with base defense for the bulk of the game. I will rectify both after we tie up the 2-point road victory against the Steelers. Let’s get started.

Much of last week Seattle used a spread or compressed D-line against the Bengals. Limiting stunts twists an complex timed blitzes. This week, on the fun down as Pete calls it, they show this look with Clowney directly over center standing up. The left guard is uncovered. Jackson gets the sack as Seattle’s coverage holds up, credit to Clowney on giving Ben no escape path.

Another little game by Seattle up front standing up Clowney next to Bobby Wagner. I like this call and the aggressive causes Ben to rush his progressions a bit. He ends up trying to find McDonald late.

New additions to the line this week Bryan Mone and LJ Colier are blocked hard and create a big crease at the line of scrimmage. Not that complicated. Seattle needs Poona power for short yardage.

This is just a tough play. Seattle showed blitz on nearly every third down. They do it again here, but the Steelers pick up the four rushers well. Ben just has too much time to move around and throw the ball. It’s actually the best the blocking looked so far in the game.

Just a heads up play by McDougald here to pick off the ball on the deflection by Moncrief’s hands. Thrown a little high, but still should have been caught. After Bradley’s struggles last week, it’s nice to see him get one.

A little jab step left by Conner causes Bobby to run into the LT here. It’s man-to man, so that move kills his ability to make the stop here. Though I’m not sure Clowney did him any favors with whatever he’s decided he’s doing on this play. This big run sets up the next play.

A great call by the Steelers after a big run. They catch Delano Hill a bit aggressive coming down and then stopping his feet. It is a killer in this situation since he has deep responsibilities. Frustrating to see, but understanable.

I just had to point out this play since I didn’t highlight much of Shaquill Griffin last week. This is just a good play on a good down and distance. It’s easy to get caught napping after a first down run for 5 yards. Griffin did not. Tip of the cap to him.

Really just a case of no one cleaning up the QB after intially containing the screen to the left. Vance Mcdonald just leaks out over the middle with all the extra time and scores. Not sure what Brandon Jackson was doing right here, but the rotating chairs on the defensive line looks like a problem.

The last defensive stop for The Seahawks in the second half after the early forced field goal. This was the best pressure they had since the first quarter and it came on a massive blitz against a fake draw 5-step drop. Unfortunately Carson’s fumble at the other end nullified it.

To be absolutely brutally honest here the defense was bad. 4 scoring drives without the two turnovers. Five big plays without the PI penalties. The defense survived by the skin of their teeth here. The offense had to finish both games these last two weeks.

Realistically, I don’t see it getting much better. Not for a while anyway. With so many issues up front, new parts like Clowney and LJ, I just don’t think Pete or Ken Norton Jr. have answers or a solid approach. Yet. This is not to say it’s all bad. Let’s get to the game ball.

Shaquil Griffin and Tre Flowers. The team is in flux on the defensive line and the safety spot. Having these two guys finding consistency and playing well was a load off one area of this game. Keep it up you two.

Needs work:
The entire defense just needs to find a groove. I’m sure Pete will tell you the same thing. My focus will be to see the defensive line rotation settle in.