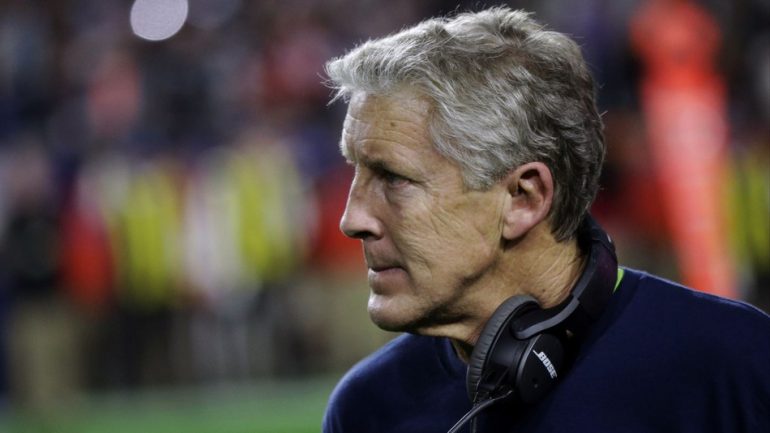 This Week In Defense 2019 Rams @ Seahawks

Rivalry games are interesting. No matter what’s happening in the current season or seasons past, these games are always about beating the rival. Very little conversation from fans will be about x’s or o’s. They call it Rams hate week for a reason on Seahawks twitter. The other fact in these kinds of games is that they are always a heavyweight fight. So let’s see how the punches landed in this win for Seattle.

Poona power play of the week makes up for the nine yards gained on the previous player where Woods and Clowney get blocked out of a play. This is just good instinct by Poona here who slashes to the outside of his man and ties up Todd Gurleys legs for a loss. This stalls the drive as Jared Goff hates the Redzone. Rams have to settle for a field goal.

The Rams have run 8 timnes for 34 yards so far and the Rams have one big completion to Everett to set this up. Unfourtunately for the Rams Goff’s accuracy suffers and Robert Woods had to change his angle to the ball. Jamar Taylor is able to recover nicely and explode to the football. Another field goal forced.

Poona Ford knocks his man 3 yards into the backfield which allows Bobby Wagner to shoot in for the wrap up tackle. After a previous drive of 3 straight throws ended in 3 incompletions, McVay opens this drive with a run.

A void in the zone for Seattle gives the Rams their best completion on this two-minute drive. Zone will always have some weaker spots but no one is in the picture until after Kupp has this ball in his hand. Likely this is on Taylor not following responsibility.

If this play is a few years ago Bobby Wagner picks this ball off. Not as fast as he once was he tries to get there and just can’t quite close the window. The drive wasn’t that bad for Seattle. If not for the Roughing call on Ansah, they would have forced a field goal. Only one play was bad as far as coverage went in the 2-minute and that’s the play I noted above. Otherwise, guys were right there to make plays.

Ken Norton calls a 6-man pressure as both Wagner and Kendricks come. This is the same blitz they ran in Arizon on a similar down. The line for the Rams expertly picks it up and Goff finds Everett easily for a big gain. Though most of it comes after the catch and three Seahawks collide while attempting to tackle him.

The screen game continues to be a nightmare for Seattle. This follows an inexcusable coverage bust by KJ Wright leaving Hignee alone on the previous play. Starting to see more single player breakdowns leaving guys open here to start the second half.

Seattle brings another six man pressure. Clowney on both of these looks gets through and does work, this time the Rams don’t have an answer and then Seattle nearly intercepts this pass.

Brilliant play calling by McVay to have no one in the middle of the field as Seattle rolls with Goff on the play action leaving no one to cover Everett. Just absolute Brilliant play design. I don’t know why more coaches don’t do this. This is infuriating.

This play is great by Tedric, but it also comes after a pair of just bad throws from Goff. Unfortunately it didn’t end the game but Tedric has had such a long road of struggles, he deserves this and earned it. What incredible concentration.

This is just a hell of a throw over KJ wright. A play the Rams dialed up and missed earlier ending in the INT. Seattle brought pressure a lot these last two drives. I counted four blitzes which is pretty uncharacteristic.

This game was a strange flashback to a win Seattle had vs the Chargers in 2010. They beat Philip Rivers after dominating the first half and really falling on their face after halftime. This game was a bit different as it was dominance for 28 minutes and then the wheels came off. I didn’t see it as a scheme issue. It could be, but I more felt like after the 2-minute drill the defense lost its rhythm and confidence.

You had spot standouts like tackles from Tedric Thompson and Mychal Kendricks.. Great individual Rushes from Jadeveon Clowney, but no more than that. You could definitely tell Ken Norton was trying to help them find that rhythm again with blitz calls, but they all fell flat and left the back end exposed in some cases. Frustrating for us as fans, but likely more frustrating for the coaches trying to fix it on the fly.

Tedric Thompson gets the nod here. With several key stops and an Earl Thomas-esque interception, he deserves a ton of recognition for hanging in there.

Pass Rush continues to be a glaring hole of inconsistency and disappearing acts. Good for 2 quarters and then non-existent. Good for the first quarter and then reappearing for spots in the fourth quarter. We need more from this group. Even Jadeveon Clowney says they haven’t hit a good stride yet. They need to and soon.