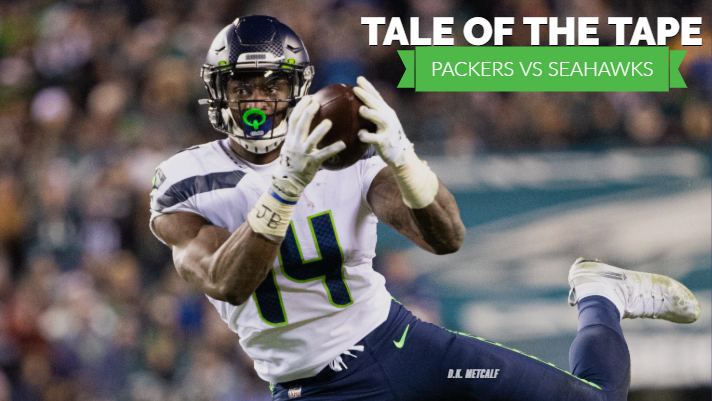 Tale of the Tape: Seahawks vs Packers Will Hinge on Turnovers & Seattle Pass Pro

The lazy national narrative for this latest Seahawks vs Packers playoff skirmish will be that it is Russell Wilson vs Aaron Rodgers. While it is always true that the play of the quarterback position is pivotal in any football game, the Packers have compiled a 13-3 record mostly due to aspects beyond their quarterback.

Rodgers has been mediocre this season by almost any measure. Are you a passer rating person? Rodgers ranked 12th at 95.4, the second lowest of his career. Prefer QBR, the ESPN metric that is more well-rounded in assessing QB play? Rodgers ranked 22nd, behind Daniel Jones, Baker Mayfield, and Jacoby Brissett. Maybe you are an EPA person? He ranked 15th.

None of this is to say Rodgers is a pushover or toothless. He simply is not the biggest threat on this version of the Packers. That award goes to Za’Darius Smith, the game-wrecking edge rusher who was the most productive pass rusher in football this season, per ProFootballFocus. He finished with 93 total pressures, to lead the league. For some context, Nick Bosa had 81 pressures. His partner on the other edge, Preston Smith, had 55 pressures of his own. That would have ranked first on the Seahawks.

The Packers have solid cover corners, and good overall secondary play. They have the best pass protecting offensive line in football, and a running back who had a league-leading 19 touchdowns.

All of these things should come before Rodgers when assessing whether the Seahawks can seriously challenge the Packers on Sunday.

Green Bay has lost only three games this season, but like Seattle, they rarely blow anyone out. Nine of their games have been decided by one score.

Turnovers are always a key statistic, but it jumps out even more for the Packers. Green Bay is among the best in football at taking the ball away, especially via interceptions. However, in the four games this season when they failed to force a turnover, they are 1-3, and their one win was a 23-22 victory at home against the Lions that most would argue Detroit lost to the refs more than to the Packers.

It is also worth noting that the Packers are 0-2 when allowing more than 24 points in a game. Only allowing two teams to cross that threshold is impressive. Their offense has scored more than 24 points just once in their last eight games. This is not the powerhouse offense of years past for Rodgers.

They are definitely more dangerous at home where Rodgers can play all his presnap games at the line of scrimmage. Very few teams go into Lambeau Field in the playoffs and exit with a victory. Opponents are 5-17 (22% win rate). Seattle has experienced this themselves with a 42-20 loss in 2007 where they initially led 14-0 and a 33-27 loss in 2003 when Alex Bannister ran the wrong route in overtime and the pass was intercepted.

The Seahawks will need to overcome the cold, the Packers, their injuries, and probably some officiating to win this game. It feels like a lot to ask, but if they can pass protect well enough to reduce the chances of a Wilson strip sack or interception, they could once again send Packers fans home muttering.

Za’Darius Smith could win this game on his own. He most closely resembles Jadeveon Clowney from the 49ers game, except he has sustained that level of performance almost every week.

He can play on the left side or the right. It is hard to imagine any tackle for the Seahawks slowing him down. Germain Ifedi did have his best pass blocking game of the season last week, and the Seahawks have given up only 2 sacks in the past 72 dropbacks against two very good pass rushing teams in San Francisco and Philadelphia.

Giving up just one sack seems unrealistic. Between the Smith’s on the edge and Kenny Clark in the middle, the Packers should be able to get to Wilson a few times. The goal for Seattle has to be avoiding one of those games where the offense cannot function because pass pressure is so disruptive. The Arizona game was an example.

Green Bay also has a very solid secondary. Jaire Alexander and the ageless Tramon Williams are good. Safeties Adrian Amos and Darnell Savage are as well. Kevin King leads the team in interceptions with five.

Look for Green Bay to try and match the 6’3″ King against budding star D.K. Metcalf. How the Packers combat Metcalf will be a major factor in the outcome, assuming Wilson gets enough time to throw the ball his way.

The emergence of Metcalf as a legitimate threat gives the Seahawks one of the most dangerous receiving duos in the playoffs. Teams have emphasized taking away Tyler Lockett given how dynamic he has been and the amazing chemistry he has shown with Wilson.

That has led to a lot of favorable coverages for Metcalf. He has increasingly exploited those coverages and now has to be forcing defensive coordinators to be wondering which Seahawk receiver merits their primary focus.

Only King has size as a corner for the Packers. He is also not their best cover corner. He has given up four touchdowns and had four penalties. The Seahawks will not be deterred to throw to Metcalf with King on him.

Metcalf has become a more varied part of the offense. He is being used on first and second down on slant routes, especially early in the game. Those types of quick routes will be crucial to combat the Packers pass rush.

Green Bay has struggled at times to defend the run. Clark has helped them improve a lot the last month of the season, but Seattle could be the most powerful run blocking team they have faced if Mike Iupati and Duane Brown return from injury. Between the weather, the pass rush, and the quality coverage, Seattle has far more of a reason to try and find success on the ground than they did against the Eagles.

Expect a sizable dose of Marshawn Lynch. Seattle will try to create as many manageable downs and distances for Wilson as possible to keep the pass rush at bay and enable some play action deep shots. This is a game where Seattle will need to hit a few big plays to have a chance at the win. If Seattle can find an effective run game, their chances of winning go up quite a bit. My best guess is they will struggle to run the ball.

Jones is a playmaker at running back and the Packers offensive line has a massive advantage over the Seahawks defensive line. Green Bay should feel comfortable in pass protection and in creating running lanes.

Davante Adams is a very good receiver who will have the advantage over any Seahawks corner. The Packers move him all around to create matchups they like. Rodgers looks for him on nearly every pass play.

Green Bay’s offense feels like it should be far better than it is. They have great pass protection, good run blocking, a very good back and a true #1 receiver. It is truly odd that they are 14th in scoring and 18th in yards per play. As much as Rodgers has fallen off, he still protects the ball at all costs. The Packers lead the NFL in interception rate and are second in turnovers overall. Seattle just won its first game of the season without creating a turnover. They may need to do it again here.

When Jadeveon Clowney is playing with energy and Quandre Diggs is on the field, the Seahawks defense has a shot. Clowney is coming off his best game since being injured and Diggs should only be healthier after another week since his ankle injury.

Bobby Wagner and K.J. Wright played wonderfully against the Eagles, and will need to be great again. They will need to limit Jones on the ground, and be cognizant of the passes to Jones or running back Jamaal Williams.

Green Bay has had problems with dropped passes, and those are always a chance for a turnover.

Ugo Amadi had his best game as a pro last week, and will almost certainly be targeted this week when he is on the field. They will also test Tre Flowers to see if they can get more cheap yards on penalties.

Poona Ford and Jarran Reed are crucial. The Packers offensive line is terrific, but their best talent is on the edge. This would be a great game for Ford and/or Reed to be disruptive on the interior.

Mason Crosby has made only one field goal over 50 yards all year. The Packers punt and kick game is weak. Michael Dickson has improved a lot lately. Finding an edge on special teams would be big for Seattle.