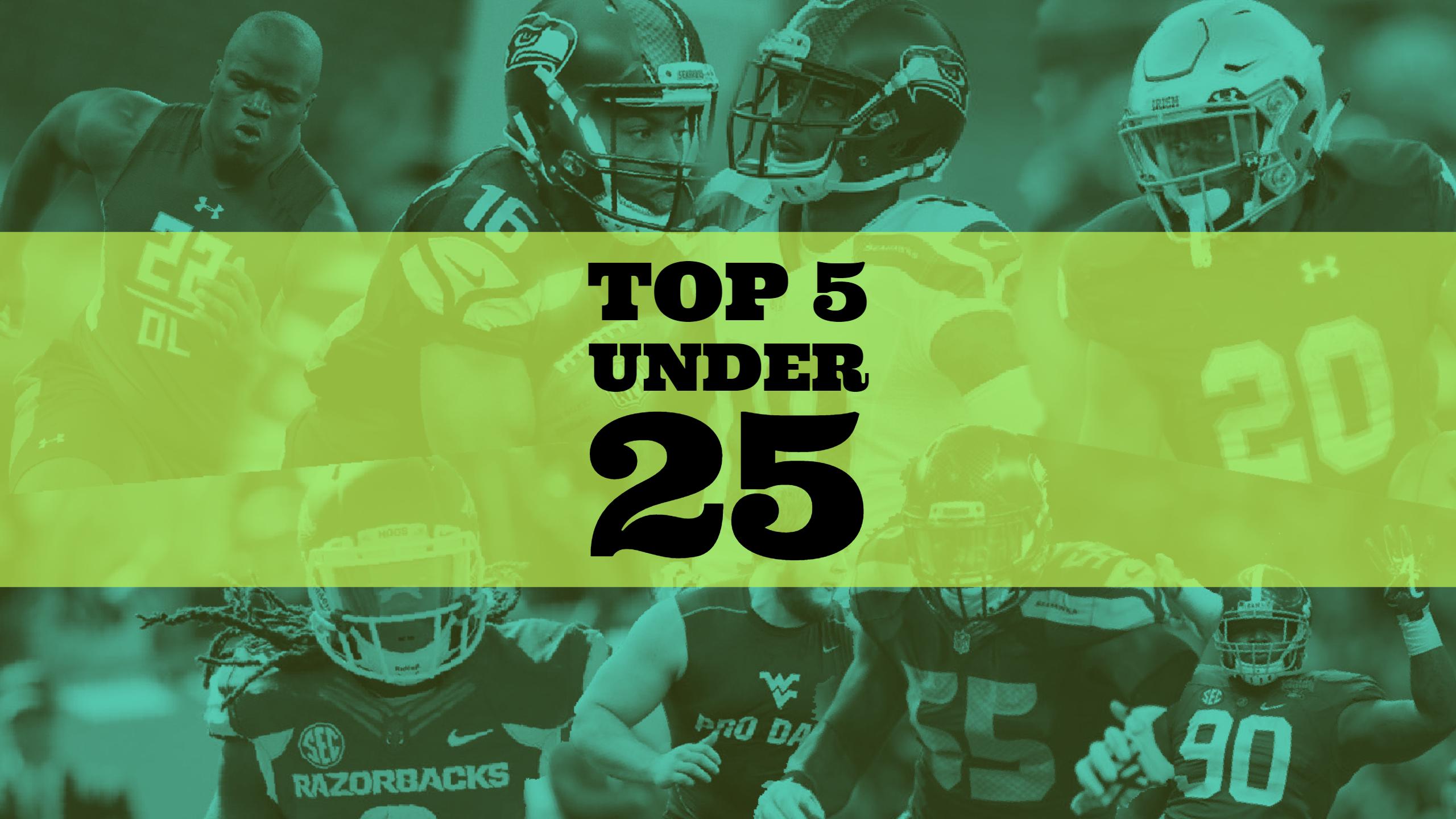 Ask a football fan about the Seattle Seahawks, and they will tell you about Russell Wilson, Richard Sherman, Earl Thomas, and probably even the retired Marshawn Lynch. The young core of the Seahawks is known throughout the league. You can go down the list from Kam Chancellor to Bobby Wagner to Doug Baldwin and find star after star who is under the age of thirty. What many people are less familiar with is the next generation of talent John Schneider and Pete Carroll are grooming. Today, we will take a look at the top five Seahawks under the age of 25, as we march toward the beginning of training camp.

Believe it or not, 48 of the 90 players on the current Seahawks roster are under the age of 25. That will change as camp rolls on and the roster thins to the 53 best players. Still, that is a lot of names to whittle down to just five. My process for getting there was incredibly scientific. I looked at all the players and graded them on their potential to be among the NFL’s elite players—a possible future All-Pro. Then, I took a look at how much they have proven so far on their path to greatness. All these grades are debateable. Have at it! 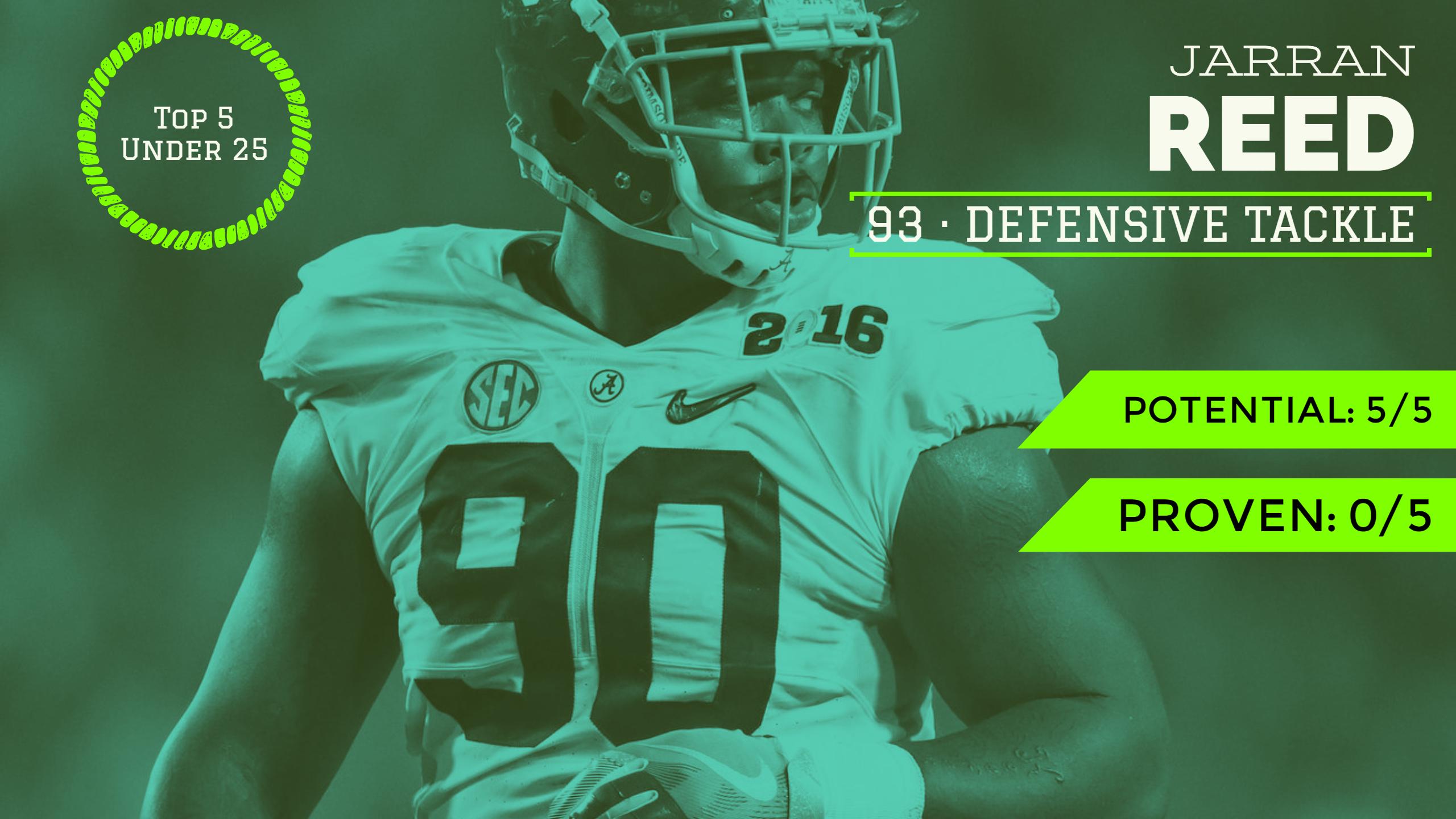 Reed was the team’s second round pick this season. No selection made the front office and coaching staff more excited. They claim to have had him rated as the 15th best player in the draft, and traded up in the second round to make sure they got him when he fell out of the first round. Some of the scouts said he was the best run-stuffing defensive lineman they had scouted in years.

All this should be taken with a grain of salt. Kevin Pierre-Louis was compared to Navarro Bowman by a Seahawks scout when he was selected a few years back. Aaron Curry was supposed to be a sure bet. That is why Reed’s “Proven” score is zilch. He has yet to even participate in a padded practice. So how could he make the top five?

Run-stuffing defensive linemen are very projectable. They are not taken all that high in the draft because there is such a premium on pass rush, and the state of pass-centric offenses means they often only play two downs or fewer if the nickel package is being used heavily. Great run stuffers still have tremendous value to elite defenses. Reed appears to have the character and the natural strength to be dominant in that role. He has played in the most physical conference in college football and excelled. There is also some chatter that he may have more pass rush potential than he was able to demonstrate at Alabama based on the role they asked him to play.

Reed is expected to start at nose tackle this year as a rookie. It is not out of the question that he becomes a Pro Bowl and All-Pro player within his first 2-4 years in the league. 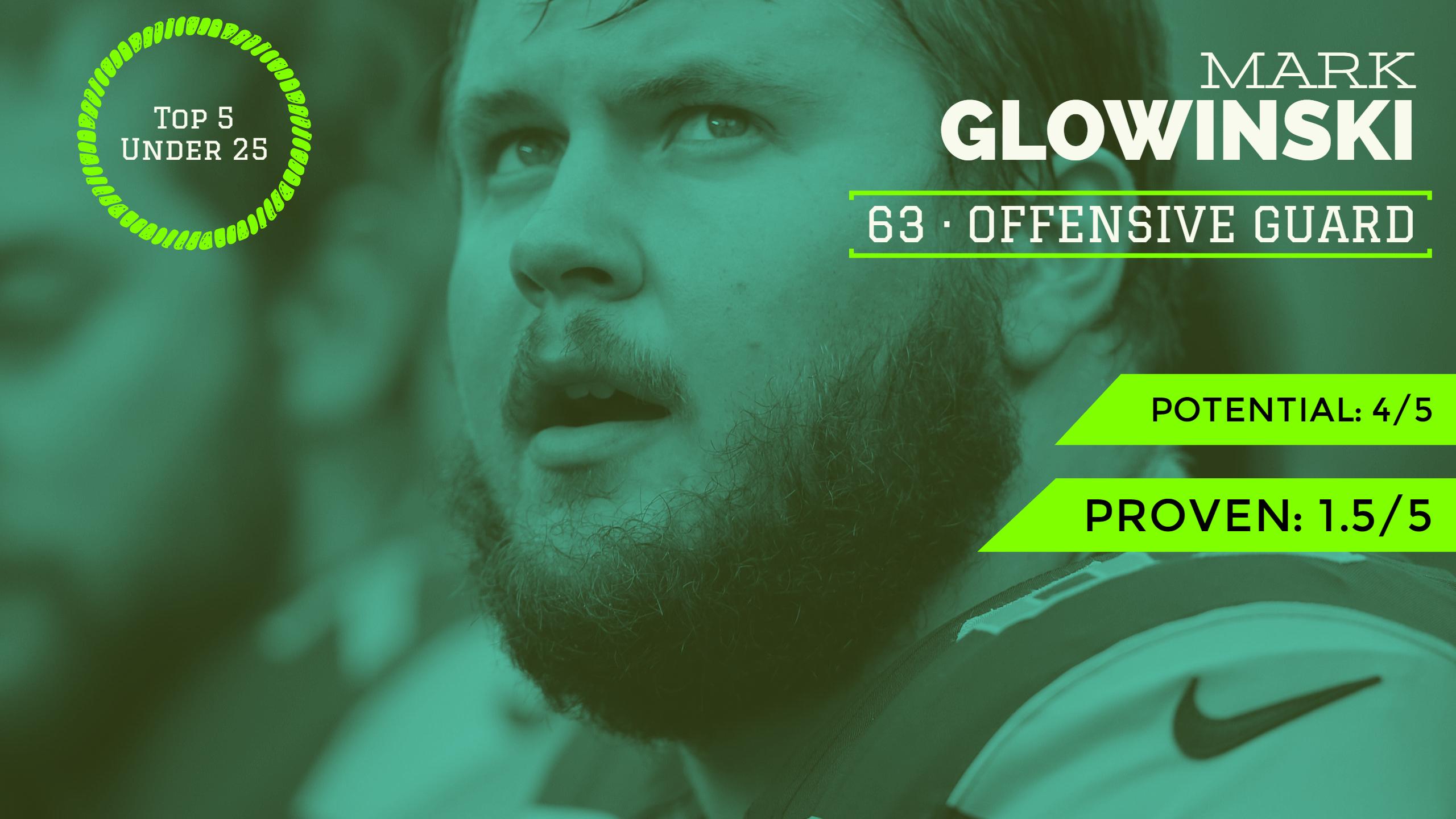 Glowinski is an intriguing combination of strength, athletic ability and refinement. That last bit may be what stands out the most about him as a Seahawks offensive linemen. So often, we see Tom Cable being asked to mold raw players into serviceable NFL linemen. Glowinski played guard throughout his college career and has continued to play guard for the Seahawks.

Unlike other Seahawks linemen under Cable, Glowinski shows some natural ability in pass protection in addition to his tenacity as a run blocker. He will be expected to slide into left guard, in place of Justin Britt, and hit the ground running. He started just one game last year as a rookie, but played well.

Players say he might be the strongest Seahawk in the weight room. Given the Seahawks propensity to run the ball, Glowinski could quickly gain a reputation as a mauling guard throughout the league. As tough as J.R. Sweezy was, he was always undersized. We will need more time to see just how high Glowinski’s ceiling is, but my early read is this could be a Pro Bowl player in the years ahead. 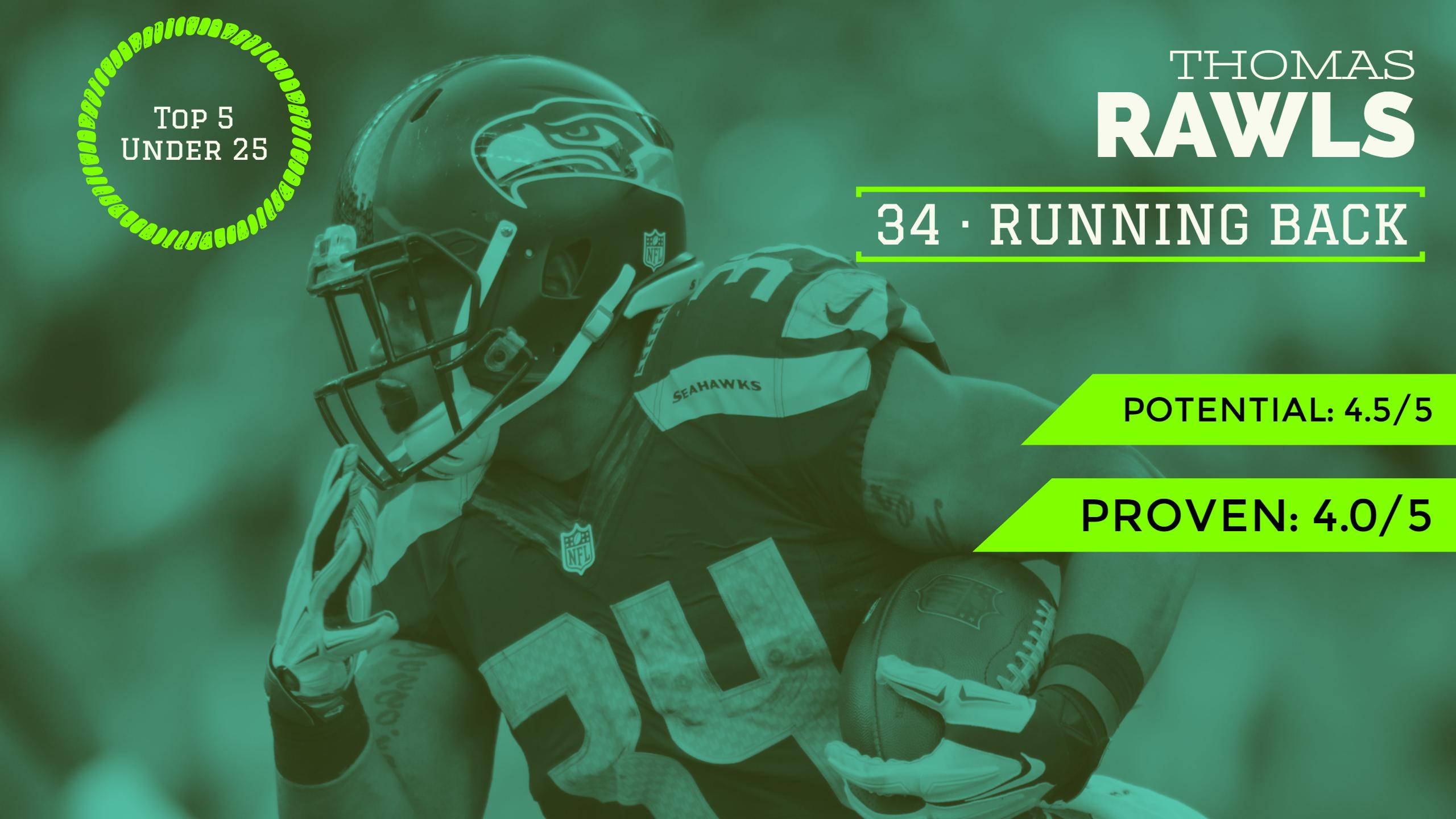 The case could be made that Rawls should top this list. He led the NFL in yards per carry and was outperforming rookie of the year Todd Gurley as a starter. The only reason he slides to third is the serious injury he suffered to his ankle. I have talked to Rawls about his injury and he is very optimistic about his recovery. Coaches have been far more conservative in their assessments.

Rawls showed a remarkable lateral burst as a rookie that was a key to his effectiveness. Should he lose a lot of that due to the injury, his potential would be greatly reduced. Only time will tell.

Should he recover fully, Rawls is a crystal clear All-Pro candidate down the line. He was putting up numbers that would have bested Lynch’s best season with the Seahawks before he went down. As much as we all love Lynch’s style, he was more of a grinder and less of a home run threat. Rawls was both. Adding a high yards per carry guy to an offense that prefers to run the ball 30 or more times per game makes for some eye-catching numbers.

Running backs do not have a long adjustment period in the NFL. They can show their stuff as rookies, and it is rare to see them backslide other than injury situations. As much excitement as there is about the bevy of young backs the Seahawks are bringing to camp this year, Rawls has already demonstrated the production and style that this team needs. If healthy, I would not be surprised to see 1,500+ yards and 10+ touchdowns this season from him. 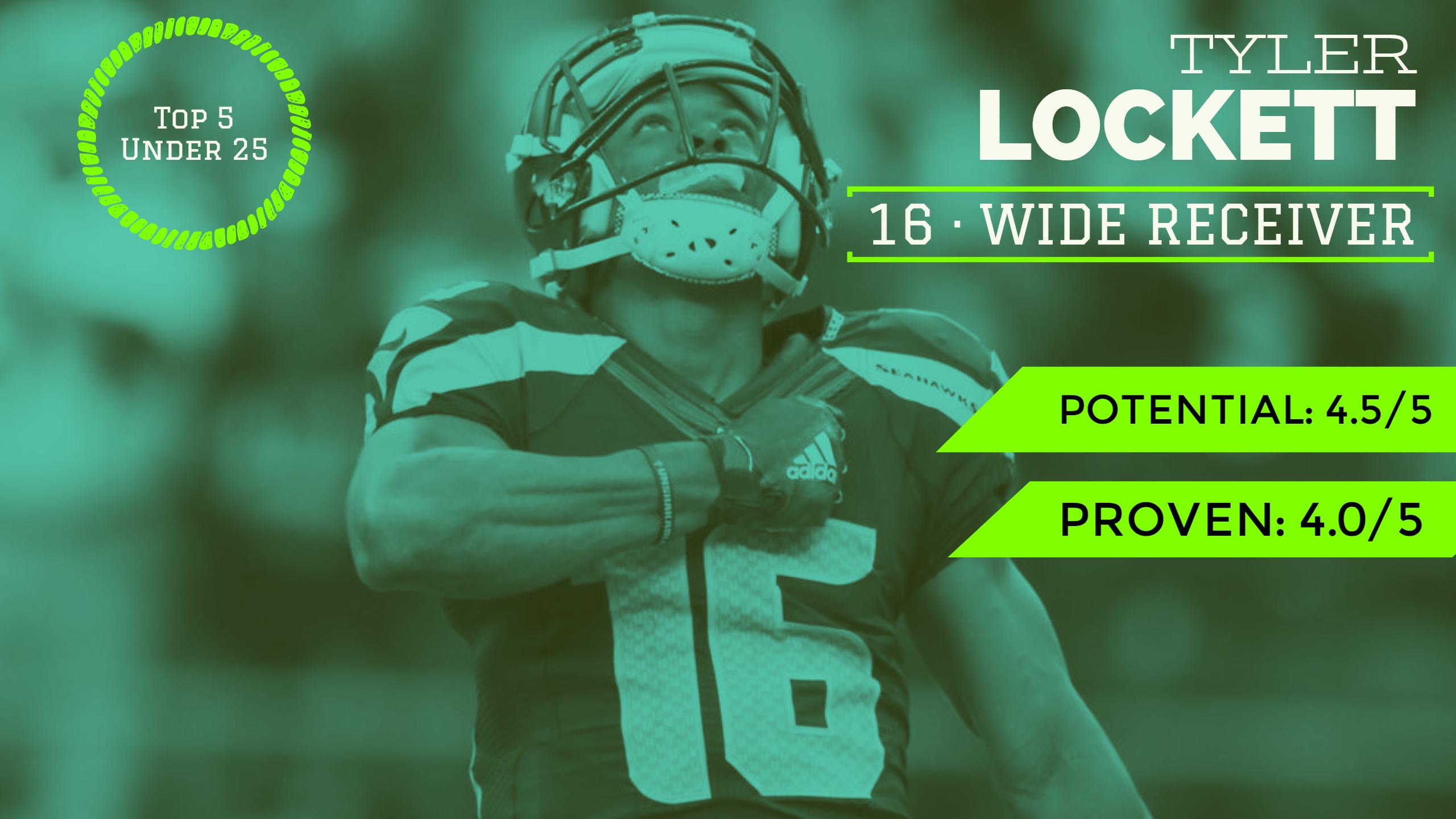 This is where things got really tough, and I’m guessing there will be some serious debate. There is no doubt that Lockett was the most complete rookie last year. He made the Pro Bowl as a returner and was a dangerous wide receiver. His ceiling is sky high. The primary reason he came in second instead of first was the position that he plays.

Receivers are the most dependent position on the field. The coach has to call a pass play, ideally where they are a primary read. The defense has to call a play that doesn’t force the quarterback to alter their primary read. The line has to protect, and the quarterback has to find them and throw them a catchable ball. It is very hard for a receiver to dominate a game.

That said, Lockett has the potential to become the best receiver not named Steve Largent to ever pull on a Seahawks uniform. He is physically gifted and respects his craft. His work ethic is tremendous and he is genuinely humble. In a recent conversation, he told me that his focus for the upcoming season is on improving his releases as the line. The only way a cornerback can stop Lockett is to get their hands on him. His routes are crisp and his speed is fantastic.

It will be tough for Lockett to make the Pro Bowl or become an All-Pro in this offense, especially with Baldwin and hopefully Jimmy Graham in the mix. That doesn’t mean he is less than an All-Pro talent. Darrell Bevell has had an offseason to think about how to utilize Lockett in the offense and unleash him on defenses. It would not surprise me one bit if he makes me regret my #2 ranking for him. 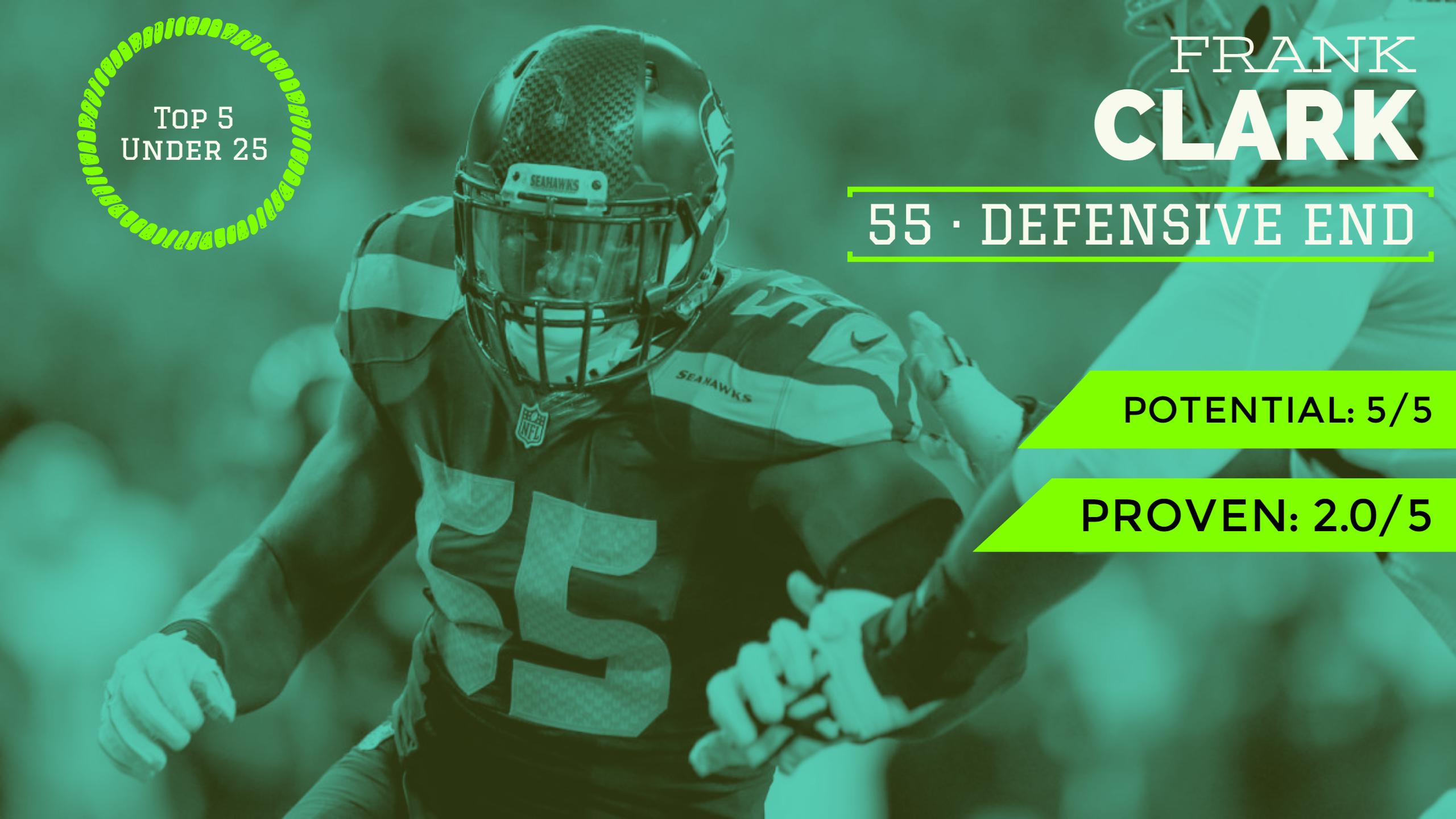 The guy only finished with 3.0 sacks as a rookie. How in the world can he be the top-ranked Seahawk under the age of 25? The answer is the other side of the same coin that kept Lockett at second place—his position is at an absolute premium in the league. Michael Bennett has said Clark can be the best pass rusher the Seahawks have ever drafted and the best player on that defensive line. If Clark even becomes half that good, he easily tops this list.

Rawls could become the best running back in the NFL, Lockett could become a Pro Bowl receiver, and if Clark is getting 8-12 sacks per season, he would still be more valuable on the open market. He flashed remarkable potential in the preseason last year. One could argue that so did Nick Reed a few years back. The truth is Clark played well as a rookie, but most of his contributions were against the run. He had never rushed inside as a defensive tackle before, but had most of his sack success last year when the team asked him to give it a shot.

Clark has dropped weight this offseason, and has a chance to slide into the nickel pass rush role that Bruce Irvin vacated. Double or triple his pass rush opportunities, combine that with an offseason of training and studying, and we could be looking at eight or more sacks this season. That would be a big jump, but it is absolutely possible.