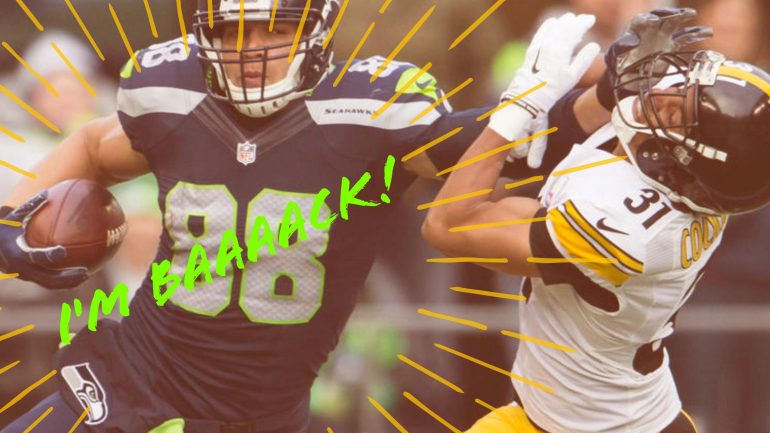 What to Expect from Jimmy Graham and Thomas Rawls on Sunday

Pete Carroll looked like the cat that ate the canary on Friday as he let the news slip that Jimmy Graham would play on Sunday. It speaks volumes that a team with a clear track record of being conservative with bringing players back from injury is clearing their star tight end for game one. Nobody could have reasonably predicted this outcome when Graham went down in a heap just eight months ago with a torn patellar tendon. Victor Cruz torn the same tendon in October of 2014 and has yet to fully make it back to game action. Seahawks fans have reason to be thrilled by the news of Graham’s rapid recovery, along with fellow recovering offensive threat Thomas Rawls, but expect both players to be used sparingly this week.

The one and only goal for Graham this Sunday is to get at least a snap or two of game action and exit unscathed. Counting on him to be a substantial part of the game plan is not fair, and probably not wise. Graham spoke at length during training camp about what he learned about his injury in talking to people like Cruz. One of the chief risks is injuring something other than the knee as his body adjusts. Cruz stressed that point and Graham has been training his whole body accordingly as part of rehab. He even built a rehab facility in his home.

No amount of practice can prepare Graham for game speed and contact. That is largely what this week is about. Carroll said after the Raider game that Graham was “10 days behind Thomas” in recovery. Rawls got two carries in the Raiders game. That might be about as much run as Graham gets this week, which would mean he would be ready to ramp up to a few more next week.

Rawls should get backup carries

Rawls should be available to take on a more active role than Graham. Carroll announced in his Friday press conference that Christine Michael will be the starter. That should mean 15-20 carries for Michael and 5-8 for Rawls. He likely could go more if need be.

This represents a chance for Michael to make the decision to restore Rawls to starter more difficult. An explosive performance by Michael against the Dolphins would have to at least raise the question in coaches minds whether there is a real reason to flip-flop Rawls and Michael in the pecking order even when Rawls is back to 100% availability. There is a reason Michael was a second round pick. His ceiling is quite high. It appears he has never been closer to reaching those heights.

Rawls has to know that and will be looking to make his own point when he gets reps on Sunday. Seattle probably will give him a full series or two in the game, as opposed to picking specific situations (e.g., third downs) to rotate him in. C.J. Prosise should be getting those third down snaps.