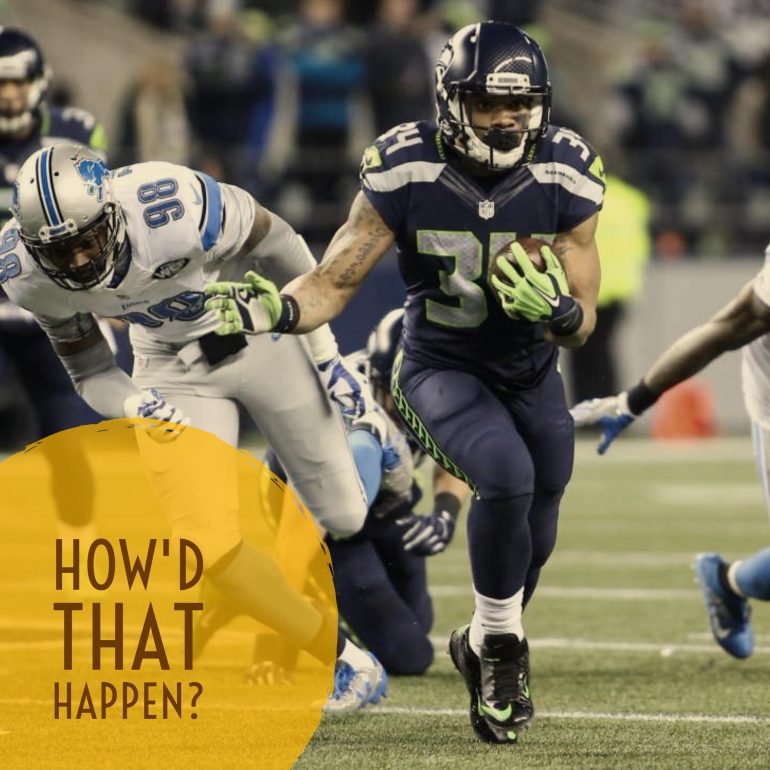 The Seahawks Run Game Was Good. How’d that happen?

In their wildcard round game against the Detroit Lions, the Seattle Seahawks rediscovered the rushing attack that had been glaringly absent for most of 2016. Seattle’s 177 rushing yards, their second highest total of the season, far surpassed their season average of 99 yards. Thomas Rawls, averaging just 1.5 ypc in his previous three games and 3.2 on the season, averaged 5.9 ypc on his way to 161 total yards. The Seahawks ran often and ran effectively and, even knowing the Lions’ defense was suspect, it was nothing short of a surprise.

You know it was a shock to those who follow the team because the first question after the game had finished was, “how did they do that?” The first attempted answer to this question was thrown out by Greg Bell. Immediately following the game, Bell posted that Seattle had all but abandoned their zone blocking scheme.

Third quarter Saturday night, my News Tribune colleague Dave Boling told me what he was noticing on the Seahawks’ offensive line.

Less, if not any, zone blocking.

As Bell notes in the linked piece, Carroll dismissed that Seattle had changed anything about their scheme. Coaches are notorious liars though, so lets debunk this one ourselves. I went back and charted every play where Seattle handed off to a running back, and the final counts weren’t surprising. Power, trap, and dive are more typical man blocking runs, although it should be noted that there are hybrid variants of all of these plays. But if we just take those as strict man blocking runs, they account for just 15% of what Seattle ran against the Lions. Without the historical numbers, I’d say that’s on the high side for Seattle. Especially the 3 powers, which Seattle will go weeks at a time without calling once. But this is more wrinkle than significant scheme change. Here is an example of a few of the different run plays Seattle keeps up their sleeve.

Charting run plays like this is difficult though. Simply telling the difference between inside zone and outside zone can be tough, and teams tinker and run hybrid plays that make it even more challenging. This is especially true this year, with zone blocking teams experimenting with how to play within the new chop block rules.

But there are some telltale signs that mark the difference between zone and man, even if the exact play call is unknown. Maybe the biggest tell is an offensive lineman’s first step. In zone your first step will be diagonal, or sideways. In man, your first step will be forward. So let’s leave behind the specific play types and just look at Seattle’s footwork.

First, here is one of the powers that Seattle ran against Detroit.

We don’t get the endzone view from behind the OL which makes it more difficult to see exactly what the footwork is here. But you can get a good idea. Everyone, except the pulling Glow, is firing forward. Gilliam and Ifedi are shooting straight off the line, while Britt and Fant are a little more diagonal and towards each other. You can also see that the line isn’t all moving in the same direction, which is what you’d usually see from a zone run. Much more uniform across the line. Diagonal steps, everyone moving basically the same direction. Each of these plays were a little different, but they all appear to be zone runs. And this is predominantly what you see throughout the Lions game.

It’s fair to say that, while Seattle were somewhat varied, there isn’t much supporting the idea that they abandoned or went significantly away from their zone blocking roots. So, what other theories are there for the bounce back in Seattle’s run game?

It’s been suggested that Seattle tightened their splits against the Lions. This could explain their improved rushing attack and why some thought they shifted to more man blocking. Here’s a comparison of some randomly selected plays over the past three weeks. I think there is some truth here, especially when you look at the tackles. The width of both Fant and Gilliam’s splits is both more consistent, and consistently smaller, against the Lions than against the Niners and Cardinals. But while tighter splits is no doubt helpful in the run game, I’m not sure that’s what swung Seattle’s offensive line from speed bumps to road graders.

So what are some other possible explanations? Likely the biggest factor was already mentioned, the Lions lowly defense. Detroit’s defense ranked 32nd in DVOA, and not by a little. The 31st ranked defense was Cleveland at 14.6%, a good deal better than Detroit’s 20.4%. Their rush defense was actually the better unit, ranking 23rd, but no matter how you slice it this was a poor group.

Without a doubt, the Lions’ linebackers were the worst of the bunch. Detroit looked baffled by Seattle’s read option looks, which accounted for a third of their runs. And no one looked worse #57, Josh Bynes.

Read option is designed to make defenders’ lives miserable, but Bynes looks especially lost. He blows his run fit, leaving both the A gap empty and himself out of position to make a play on a keeper. Rawls walks into the endzone as a result.

More read option. 57, the MLB, pounds his feet & drifts to his left a little. Doubles don't get much push but Rawls hits empty second level. pic.twitter.com/yfGpbytsuv

Again, Bynes sits in no man’s land and takes himself out of the play. Despite the end playing the QB and the corner having contain, Bynes gets pulled left watching Russ while Rawls hits the hole going to the right.

But it wasn’t just Bynes, the Seahawks executed well against a lesser talented team and it resulted in plays like this.

There’s one more factor in Seattle’s run success that should be talked about. While these numbers are likely lower than the true number of plays where Seattle used a fullback for most weeks, it’s clear Seattle significantly changed their normal personnel packages. The percentage of plays Seattle ran with a fullback was nearly double the second highest game, which was the previous week against San Francisco. And while 11 personnel was still the most used personnel grouping, Seattle ran more “heavy” groups in total. Obviously heavier sets are more conducive to running, but having a fullback significantly alters how offensive linemen approach blocks. Linemen are able to be more patient peeling off their combo blocks, as the fullback is able to pick up free defenders in the hole or get out to the second level. This is especially important for Seattle’s line, which tends to give little help or peel off their double teams too quickly. Here’s an example of that with Ifedi and Britt.

Ostensibly, Ifedi is supposed to combo with Britt. Instead, Ifedi punches the nose and quickly gets out to the linebackers. The punch does more harm than good though, and Britt ends up sitting in the hole trying to hold his block. There are lots of examples of this throughout the year. Putting Reece in the backfield seems to have evened out these issues.

It’s a different situation, but you can see that Ifedi and Britt drive their defender well downfield and neither look to peel off. Ifedi even lets a linebacker penetrate knowing that Reece is there to pick him up.

Seattle has historically been more successful working out of 11 personnel, but Reece has made an impact in both the running and passing game. Let’s hope he’s healthy for the divisional round.