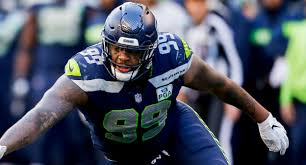 Introduction:
This Week In Defense was originally created to help highlight key plays, better illuminate the scheme being run and strengths and weaknesses

The following format is how each game will be broken down:

–Narrative of the game:
A quick breakdown of fan sentiment good, bad, indifferent. This helps set the stage for selecting plays. Each week, we see if the Narrative was right or if the team performed above or below expectations.

–Game Wrap:
A quick wrap up of the entirety of the defense including playcalling.

–Game Ball
Awarded to the most influential player of the game. Not necessarily the most statistically visible.

–Needs Work
Sometimes a player, most times a position group will be highlighted with a snippet about going into the next game.

Feedback and comments and questioning my point of view are extremely encouraged. Let’s get started.

Author’s note: GIFs were graciously provided by John Fraley. Timestamps in the play notes are so you can find the play yourselves in all-22 or broadcast. I am working on a means to compile the selected plays into a video for future articles. I haven’t had luck so far.

Narrative Of The Game
The feel was that Seattle’s offense would carry the day. So many new moving parts, Jarren Reed’s suspension and Jadaveon Clowney’s addition had people thinking the defense had more questions. Quinton Jefferson wasn’t on anyone’s to watch radar. So how did this all happen? Let’s take a look

[First Quarter 12:43 3rd and 10 Screen pass left to Mixon tackled by Bobby Wagner for -3 yards]
I just gotta open with Bobby here. We’ll get into the Bengals and Quinton Jefferson wrecking them, but this is just good old classic Bobby. Teams ran this last year with a lot of success as edge and interior presence was inconsistent or over aggressive. Leaving Bobby to get washed back with trash. This is a good sign when Bobby can work this clean. http://www.hawkblogger.com/wp-content/uploads/2019/07/Classic-Bobby.gif

The first of many plays for Quinton Jefferson in a lights out game for Seattle’s defensive line. This play is almost entirely QJeff. A shout out to Clowney for taking Andre Davis so far off the gaurd here. Jefferson wins right at the snap, jacking the LG back toward Dalton. Dalton attempts to move to reestablish his vision and a throwing lane, but Jefferson already beating the LG just sheds and cleans up his pressure. So good to see this for him.
http://www.hawkblogger.com/wp-content/uploads/2019/07/Jefferson-sack-1.gif

The screw up on this play is easy to spot in the secondary here. McDougald picks up the underneath route while Flowers picks up the same one. Not sure why he would make this mistake really. Never even sees Uzomah run by him. This leads to the flee flicker touchdown and was the first of 4 major miscues in the secondary. Bad sure, but not un-correctable.

Really this play encapsulates Tedric Thompson’s time with the Seahawks. The almost not really that close non pass deflection only adds to a career of relentless disappointment. I don’t usually break plays down to bash a guy, but if Thompson is gonna be a starter in this defense he has to start contributing more than a “Oh almost.” kind of play-making. Either make plays or you’ll be replaced. Likely sooner rather than later. Don’t say “Earl Thomas would have picked that, don’t say Earl Thomas would have picked-s***-you’re typing it you moron! Okay okay, I’ll stop. The play prior to this Bradley McDougald inexplicably unloaded on Ugo Amadi while apparently “Trying to pick up John Ross crossing the formation and coming out of the backfield.” I don’t know. I’ll include the replay of both plays so you can see what I mean. http://www.hawkblogger.com/wp-content/uploads/2019/07/Tedric-Why.gif

The quick burst up the field by Quinton Jefferson I think causes Dalton to lose his composure just a bit. Jefferson closes very quickly here and the ball slips from Dalton’s hands into the waiting warmth of Al Woods.

This qualifies as my Poona power play of the week as well. Even though he doesn’t make the stop he beat his blocker into the backfield in short yardage. This is not easy to do. As for Mr. Woods, he’s what I imagine they hoped to get out of Sheldon Richardson but didn’t. He stones the push and finishes the play single handedley. As much as they struggled at the point of attack last year, I want more of this please.

This is a playaction fake of a stretch run right. Jefferson basically goes inside the push block of Davis and ends up in perfect position to sack Dalton. This puts my favorite trait of his on display: up field speed. He’s so fast. I could watch this play for hours.

The same type of play from a few minutes earlier. The main difference is that Quinton uses an arm over move as Davis goes for the block down. They were going to run a screen here but Davis’ inability to contain or occupy Jefferson kills this play dead.

Let’s just enjoy the fourth quarter motor from Mr. Clowney here. Consider, no training camp, no mini-camp no preseason. This is great to see. http://www.hawkblogger.com/wp-content/uploads/2019/07/Clowney-motor.gif

Though Jefferson will get credit here for the deflection. Watch Brandon Jackson blast his man into Dalton who can’t step into the throw. Seattle brings pressure here and they’ve done that a few times in these last few drives. Again, watch Jackson here. So cool. http://www.hawkblogger.com/wp-content/uploads/2019/07/QJeff-hands.gif

Game Wrap:
The secondary should be better as time goes on. Pete said in his Monday presser that they didn’t care about Dalton’s yards just big plays. 2 bad plays accounted for 94 yards and a touchdown. Overall though, the defensive line and linebackers should get better as the season wears on.

If you go back and watch the game you’ll notice that Seattle didn’t use any of their classic line stunts or twists. Instead the team played straight up and just played the gaps or splits (the space between each linemen differently. Sometimes spreading the line out and other times tightening them up. I would expect them to add in more stuff as guys grow together.

Al Woods looks like a great fit. He takes on double teams and wins and destroys 1-on-1s. This is what they hoped Sheldon Richardson would be. However, Sheldon tended to freelance and create his own chaos. In a 1-gap system up front a guy consistently playing like that is tough. It’s not Sheldon’s fault though, coming from a blitz heavy do your own thing 3-4 principle system, it was bound to be a little tough for him. Al Woods doesn’t have this hang up.

Quinton Jefferson made a ton of key plays in this game. The kid has always had great instincts and speed. I noted when they drafted him that his ability to locate the football was exceptional. His closing speed was off the charts as well. One of the big reasons we saw him show out in this game was because he finally had true one-on-one match-ups. Last season he always seemed to get popped by one guy and blocked by another, nullifying his burst off the snap. You see now what can happen when he’s not facing that. Congrats to him. First of many big games I think.

Hopefully the secondary corrects some things and Tedric Thompson figures it out. If not, bench him sooner rather than letting him cost you a game or two.