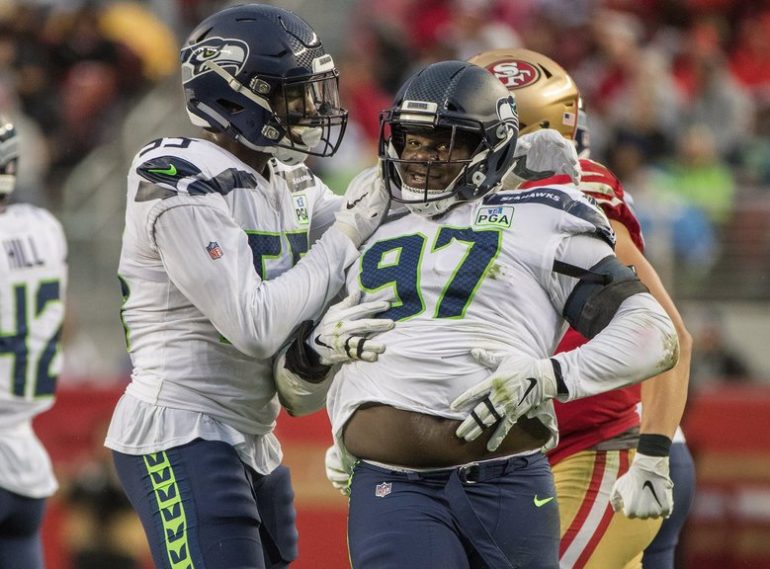 This Week in Defense Week 8 Seahawks at Falcons

Narrative Of The game:

The scheme is bad, the pass rush sucks Seattle unprepared. Any number of frustrated arguments came out of last week. Even so, the worst negative outlooks had some positive thoughts about the defense, including myself. Coming into this week it was simple, win. There wasn’t much expectation besides that. The team gave us a scare in that regard so let’s look at what happened.

Seattle’s defense struggled all day with the run left. Atlanta signaling run with only wide receiver on the field. Then they put two TEs on the left side of the offense. Even with that advantage, Atlanta gains six as their left tackle pulls around and gets hung up with the two TEs briefly. Freeman makes clowney miss, but Reed is the disappointment here. Reed looses his one-on-one and gets driven 4 yards back as Freeman finds a lane.

Two quicker out route throws proceeded this one. This is the first time Shaquill gets a real test on the day. A single slant route to the only receiver on the right side of the offense on an island. Many times this is short route or a stop. Everything is designed to take your eyes off what they are about to try. Schaubb is throwing this slant all day. Shaquill passes this test easily. So good to see.

A simple out concept that Tre Flowers was struggling with earlier in the year. This is one of those times you gotta see it and attack it. King is way too timid and in his own head here. The give away is how poorly he stays with Ridley, giving ground and changing his angle of pursuit. There’s no way he should be leveraged like this. His feet looked like they were in cement.

Blair gets some focus now. I love this kid. He’s only 15-yards off the line of scrimmage before the snap which tells me Seattle doesn’t think Schaubb has a deep ball worth any worry. Blair makes the play this system says you must make. See the dump off and attack it once the ball is thrown. Blair explodes to the ball here. If this defense is going to work you need it to execute just like this. When the ball is thrown come down hill and make the stop. The previous play with King is more the example of what Seattle has been getting out of its secondary.

Atlanta is still running these bench routes. They’ve only tried one deep shot to Julio Jones. Here Jones is slotted up and Thorpe makes a great play to tackle him before the sticks. Quick passes all leveraged to let Matt Schaubb drive the football. Nothing finesse. No bullet passes outside the slant earlier.

Kendricks doesn’t bite on this play fake at all. Matt Schaubb throws so quick I’m not sure he even took in the whole field. Kendricks just dropped back and made a heck of a play to snag this one out of the air. Classic Schaubb. This play came after the OPI on Jones down field. The third such pass thrown today.

The Seahawks get caught blitzing right into a screen pass. This leaves Blair and Tedric to try and clean this up as Wagner can’t make a play. Blair puts a not so great highlight as he tries to get over and make the stop. Shaquill battles through and Tedric kinda looks involved but didn’t matter. On the last Field Goal attempt from Atlanta, their offense started being more aggressive and pushing the ball down field. Though they spun their wheels a bit inside the 35 and had to attempt the kick, they clearly saw Seattle’s youth and inexperience on the back end.

Seattle gave up four yards on a run the previous play to the right. Atlanta calls the same play to the left just flipping the formation. Rasheem Green was leveraged out of the play both times. The difference for the sehawks on the 4-yard run vs the 23-yard run? Poona ford scrapped off his man to make a stop. Al Woods replaced him for this snap and a repeat of Green getting out of his gap ensues with no one to cover on the toss. Oh just a useless note here. Tedric Thompson ends up face planting feigning a tackle attempt.

Seattle’s blitz catches Atlanta in a deep play fake and picks up just it’s second sack of the day. The defense just wasn’t making any plays in the third quarter until this one.

A great play by Blair to see what’s happening and attack here. He’s also initially starting a back pedal before he explodes to come blow this play up. Of all the bad that this team has put on film, this kid is putting hope and competency back on the menu. He will later end this drive with a forced fumble.

There are times when I re-watch a game that I gain significant perspective and change my opinion. Had I come in here with my initial thoughts I would have ripped Ken Norton for still looking lost. However, after the re-watch session, I realized that that was a mistake.

The 9 points that were scored in rapid succession with strange blitz decisions were the only two drives where I was angry. This has Pete’s finger prints all over it, trying to get the defense a signature win. In the end it didn’t work out.

As for the other drives, I think Seattle’s defense and pass rush has to eliminate 7-step play action plays. These were the biggest plays for Atlanta and exposed the back end of this defense, especially the starting Free safety.
If they can find a way to do this, they should be okay to mediocre, instead of bad.

Mychal Kendricks had a good game and killed two drives dead. One early and one in the second half that forced a field goal. He had several other great blitz rushes as well. Shaquill gets an honorable mention here.

Rather than just write pass rush again, I would say a good place to start would be all 7-step plays. Find a way to stop those. These are the deepest and longest naturally developing pass plays. Instead of pushing for good rush, scheme to force teams away from this kind of play.