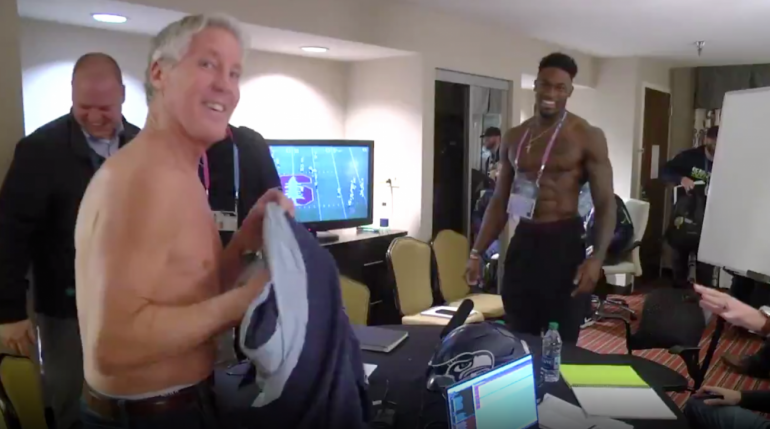 The Morning Before: Seattle in the Upside Down

We have been here before. Seahawks versus 49ers. San Francisco looks much like that did when this rivalry mattered. They feature a brutish defense, a pounding running game, and a quarterback who can rise up and beat you. Seattle, though, only resembles their past selves in the way a relative shares the same eyes or the same smile. That was a team dominated by defense and an iconic running back, complimented by a dynamic young quarterback. This is a team centered around the best quarterback in football, with flashy weapons that fit like brass knuckles on his fists. Richard Sherman remains, but his colors have changed. Welcome to the upside down. In it, we will learn whether the evolution of Russell Wilson is enough to slay the demogorgon growing in the bay.

Just as it was when these teams faced off in 2012 and 2013, this game very well could be a foreshadowing of who will represent the NFC in the Super Bowl. Consider that the NFC West has supplied the NFC champion in four of the past seven seasons.

It sounds foolish to speak of Super Bowls when the Seahawks have barely beat the teams they have played and have one of the worst defenses and special teams in football thus far. Yet, that is what sits in front of them tonight.

San Francisco deserves to be heavy favorites. They have eviscerated opponents. Their defense is like a sharknado that blew through a razor blade factory. They are that fast, that strong, that lethal.

It was nice when that sort of defense lived in the northwest. In fact, watching them play reminded me of the Seahawks Super Bowl defenses. When I studied those Seahawks teams back in the day, I found that history tended to side with dominant defenses over dominant offenses. Seattle versus Denver was one such example. Denver versus Carolina was another. New England versus the Rams a third.

As much as it can be intimidating facing a group like this, it can also be a catalyst. Beat this group, and no other should be able to hold you down. The confidence from overcoming this crew could catapult Seattle into rarified air.

It very well may take a game plan that many Seahawks fans have come to hate. Drop back 40+ times against this 49ers defensive line with this Seahawks offensive line and Wilson’s tendency to persist until a big play avails itself, and you are likely looking at 7+ sacks and probably a turnover or two.

No, the prudent plan here would be to hammer Chris Carson into this San Francisco defense. Yes, he has fumbled, but that cannot stop the team from utilizing him now. The 49ers will know it is coming. That will be the chance for Wilson to adjust calls at the line, as he has become so much more skilled at doing, and punish the 49ers through the air.

It must be punch with the run game and counterpunch with the pass. The 49ers will be sitting on short routes, assuming their pass rush will not allow any longer developing pass play to materialize.

The only way I see the Seahawks upsetting San Francisco is by finding a way to be effective in the run game. If the 49ers can bottle up Carson, and Wilson finds a way to win it anyway through the air, that would be even more impressive.

For that to happen, the Seahawks line would need to protect better than ever before, Wilson would need to get rid of the ball quickly and on target, his receivers would need to make contested catches and break tackles.

The key there could be Gordon. Silly as that may sound, he is the x-factor. Nobody knows what to expect from him in this game. When on, he has been one of the most dominant receivers in football. Maybe the most dominant.

He appears motivated and happy to be here. He is playing with a quarterback whose strengths match his own as a deep threat. Tyler Lockett and D.K. Metcalf have done enough to require coverages to account for them. Gordon should have the most favorable coverage tonight, possibly of his career.

If he balls out in this game, other teams will adjust. There is no way the 49ers will come into this game focused on stopping him. If they do, it will open up chances for Metcalf, since they will never deprioritize Lockett.

Defensively, the Seahawks have been so dreadful that this game represents a chance to regain some pride. The 49ers run game is as impressive as their defense.

They will pound and pound and pound away, and their backs are not just looking for a few yards. They break explosive runs regularly. Matt Breida deserves a ton more credit than he is getting. The guy never goes down on first contact, and hits the hole at a million miles an hour. When blocked right, he is gone.

There has never been a better time for the Seahawks defense to come together to play as one and tackle together. Diggs could be a real help here. His instincts, speed, and hitting are better than any safety Seattle has put out there so far this year.

If the Seahawks can slow the 49ers run game and Jimmy Garoppolo beats you, that is something you just live with. If they do not stop the running game, this will not be close.

It is a shame that so many Seahawks fans are writing off their own team, and apologizing for their 7-2 record. I understand the frustration with the way the team has played and the lack of signature victory against an elite opponent. At the same time, the Seahawks have won nearly every game and have gone toe-to-toe with elites like the Saints and Ravens. It is not hard to argue Seattle could have won both of those games.

Many fans are suffering through meaningless football already. Seattle is playing in one of the best games of the season. They have earned that right. Enjoy it. Allow yourself to believe. It is far more fun.

We will learn a lot together tonight. At a time when fans seems to create so many divisions amongst ourselves for silly differences of opinion, let us unite in our support of the team we love and keep the arrows pointing out of the teepee. We face a fearsome enemy tonight. A familiar enemy. The world is betting against us. Time to stand up and fight.