Search
Home
OffenseWide Receivers
Doug Baldwin and Golden Tate have publicly voiced their displeasure in recent weeks about the moniker that many pundits have bestowed upon the Seahawks receiving corps: average. The truth is, with the injury to Sidney Rice, the receiving crew is well below average in at least one important way; they are shorter than just about any group of receivers in the NFL. Take the top one-hundred receivers in the NFL this year, based on receiving yards or receiving touchdowns, and their average height is 6’1″. Limit it to the top twenty, and the average height rises to 6’2″ and a weight of 211 pounds. The Seahawks have one active receiver that even meets that average of 6’2″ and 211 pounds, Ricardo Lockette, and he happens to be at the bottom of the depth chart. In league where receivers and cornerbacks are getting taller and heavier, the Seahawks have once again charted an unconventional path to extraordinary results.
Pete Carroll loves to defy convention. He revels in it. But he has made no secret of his preference for tall receivers. One of the first players he brought in to help the Seahawks receiving corps in 2010 was his old behemoth, Mike Williams, all 6’5″ of him. Then he and John Schneider opened up their pocket books for 6’4″ Sidney Rice in free agency. Even when Rice recently was lost for the season, it was apparent how conflicted Carroll was about shifting the diminutive Baldwin into the vacant flanker spot on the outside. All Baldwin has done since getting that opportunity is catch 13 passes for 214 yards for a 16.5 average per reception and 2 touchdowns. If he were to maintain that pace for a full 16-game season, he would have 69 receptions for 1,141 yards and 11 TDs. People are just now realizing the proper comparison for Baldwin is not to Bobby Engram, but to Victor Cruz, and Baldwin’s numbers imply he may be the better of the two players. 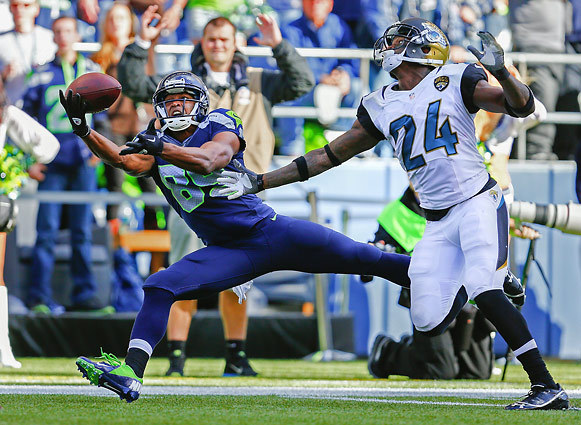 In Baldwin’s two healthy seasons he has averaged 15.5 and 16.3 yards per catch. Cruz has only one season over 14.2 yards per catch. Baldwin has been incorrectly classified as a possession slot receiver where Cruz is thought of as the deep threat. The numbers do not support that perception. 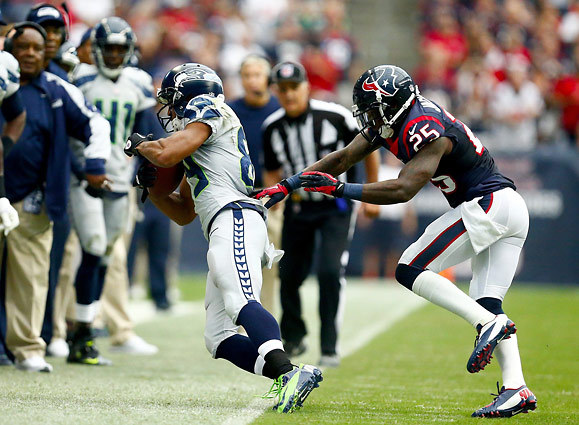 Cruz has 65 explosive receptions (defined as 16+ yards) in his three years. That means 29% of his catches are of the explosive variety. That is nearly 1-in-3. Impressive. Take Baldwin’s two healthy years in 2011 and 2013. He has 36 explosive receptions in those two seasons out of 87 total catches. That means 41% of his catches have been of the explosive variety. Perception? Meet reality.
Golden Tate checks in at 5’10”, just like Baldwin, but he brings over 200 pounds of punishment with him. No receiver in the NFL has broken more tackles (29) the past two seasons than Tate, according to Pro Football Focus. He leads the NFL in yards after catch per reception at 8.7. That equals the number another mini-Seahawks receiver, Percy Harvin, posted during an MVP-type season last year. If all the short Seahawks receivers were Smurfs, Tate would have to be Playmaker Smurf (Baldwin would likely be Grumpy Smurf). Tate does not just take short passes and break tackles. He specializes in the deep ball. 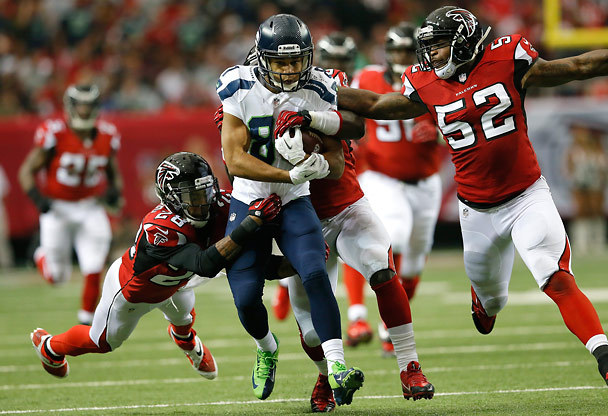 Only eleven receivers in the NFL have caught more passes of 40+ yards in the last two seasons than Tate. Only three players, Torrey Smith, T.Y. Hilton and A.J. Green have caught more 40+ yard catches as a percentage of their total receptions the last two seasons (min 85 receptions).
Jermaine Kearse is the second of three undrafted free agents in the Seahawks receiving room. All Kearse has done is lead the NFL in percentage of catches resulting in a touchdown (min 10 receptions). Nearly 31% of the time Kearse touches the ball, Steven Hauschka is trotting on the field after to him for a PAT. And these are not little slant routes or fades from five-yards out. Three of Kearse’s 13 receptions have been over 20 yards, and all were for touchdowns. Football Outsiders does advanced statistics that include measuring the efficiency and effectiveness of receivers that are outside the spotlight, and have been targeted less than 34 times to this point in the year. Kearse sits atop that list. His teammate, Baldwin, ranks #4 in the NFL in value per play as a receiver, and #9 in overall receiver value, ahead of names like Dez Bryant, Brandon Marshall and Torrey Smith. 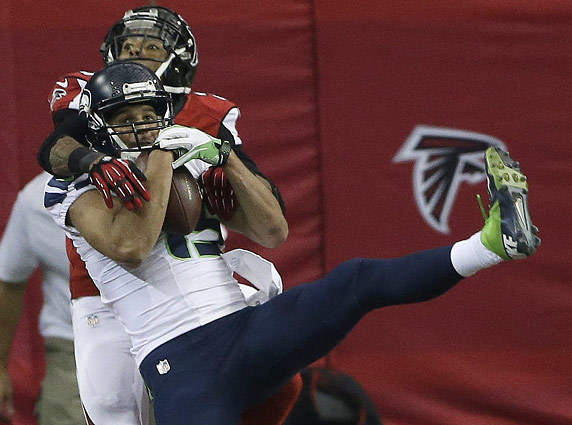 These three players have been called average by many. They have been doubted and blamed even within the Seahawks fan base. As they welcome in yet another sub-six-foot dynamo, it is time to recognize this group for being anything but average. They have won games for this team this season. They will win more down the line. A franchise that has seen the like of Steve Largent, Brian Blades, and Joey Galloway may be witnessing the best performance by a wide receiver group in Seahawks history. No collection of players has done more with the opportunities given than these guys. The story line from here on out will be that Percy Harvin elevated this group of receivers. The truth is that they are already great, and are about to get a whole lot better.