Starting To Project Our Passing Game

The most encouraging part of the last two games has been the growth of the passing game. It’s really no surprise that the leader of the team, Matt, has led such a surge, and it has got me thinking big. What’s a realistic ceiling for the type of season Matt and his receiving corps could post?

Let’s start with the two most prolific passing teams from last season, the New Orleans Saints and the Arizona Cardinals.

Drew Brees passed for a near record-breaking 5069 yards, but remarkably, did not have a single 1000-yard receiver.

Take a look at the scatter chart of all the Saints’ receivers and their yards: 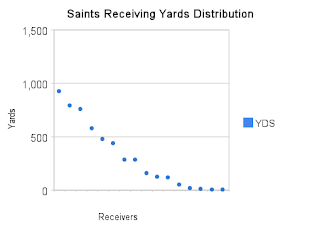 And then take a look at the scatter for receptions: 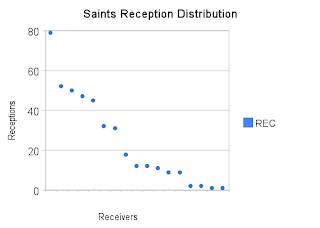 There are basically five guys that were getting the ball thrown their way a lot (more than 40 receptions), and four guys that got the bulk of the yardage (over 500 yards).

The Cardinals passed for an equally impressive 4875 yards, but did so with a very different distribution pattern: 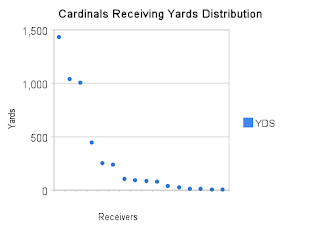 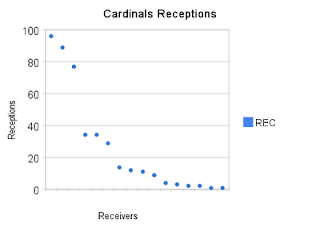 With the Cardinals, everything is concentrated. You have three guys getting the bulk of the receptions (over 40), and three guys all over 1000 yards (only the fifth time a team has done that in NFL history).

Now let’s look at Matt’s career best passing performance in 2007 when he passed for 4,181 yards to see his tendencies toward distribution or concentration. 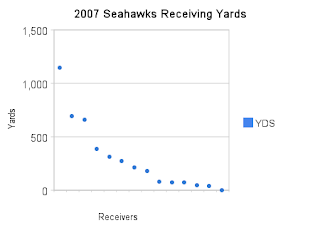 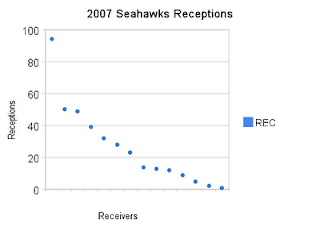 You see Matt only had three guys over 40 receptions and three over 500 yards. My instincts have been that Matt has favorite receivers that he will go to far more often than others. I would have to do this scatter charting over multiple seasons to validate that perception, but this season supports it.

With that in mind, I think it’s likely to expect Matt to throw far more often to a 2-4 receivers this season than to spread it all around like Brees did for the Saints last year. We’d all agree that Carlson and Housh are locks to be two of the top three. Burleson would seem like a good candidate for #3, especially considering he was #2 when healthy in 2007. What we’ve seen in the last two games indicates we may be in for a passing season we’ve not yet seen from this team before. Don’t be surprised if at the end of the year you see three guys with 80+ receptions and 800+ yards.