Mediocrity is a bad word in my household. To be mediocre is to never put the effort in, or take the risks necessary to be great, or to be disastrous. Mediocrity is often bourne out of fear. Fear of failure. Fear of being different. Fear of fear. Those that ascend beyond the mundane do so by focusing on what can go right, not what might go wrong.

Seattle Seahawks fans know mediocrity better than most. In our 540 regular season games, played over 34 seasons, we have lost by an average of 0.74 points/game. Less than 1 point per game separates us from our opponents. Our average point differential per season is a statistically insignificant -11.79. What that means, is that if you have a Seahawks team play 16 games, they will score ~12 total points less than their opponents. 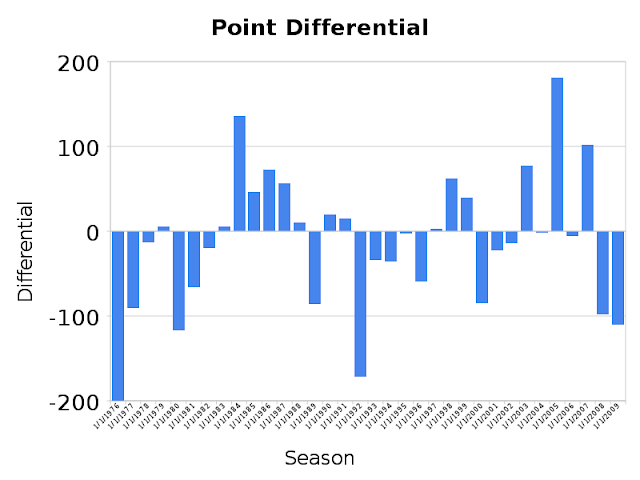 The Seahawks have outscored their opponents in 15 seasons, and been outscored 19 times. It is easy to pick out the boom times and the bust times. There is no shame in struggling as an expansion franchise back in 1976. It is quite impressive how quickly the team became competitive. The “Ground Chuck” era through the 80’s possibly our most consistent stretch, outscoring our opponents by 46 or more in four straight seasons. That, however, did not always translate into victories. 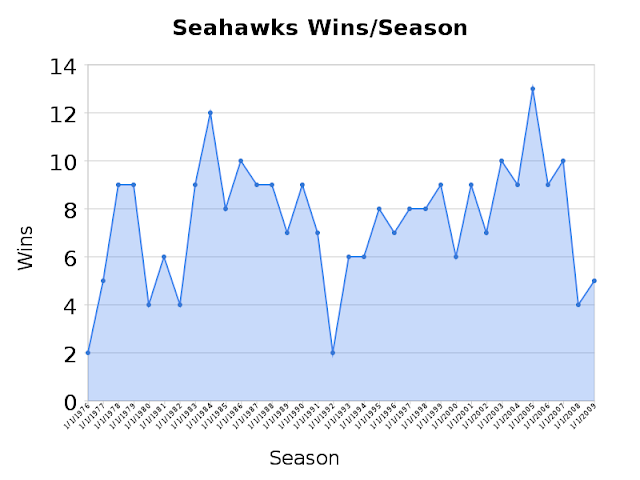 Twelve, eight, ten and nine victories does not exactly translate to a dynasty. Although, it was certainly better than the “Flores/Behring” 90’s. Punctuated by the humiliating two win season in 1992, the Seahawks went for ten long years between playoff appearances. It was by far the longest such streak in the NFL at the time. Three things helped to turn it around: Paul Allen, Mike Holmgren, and the move to the NFC West. 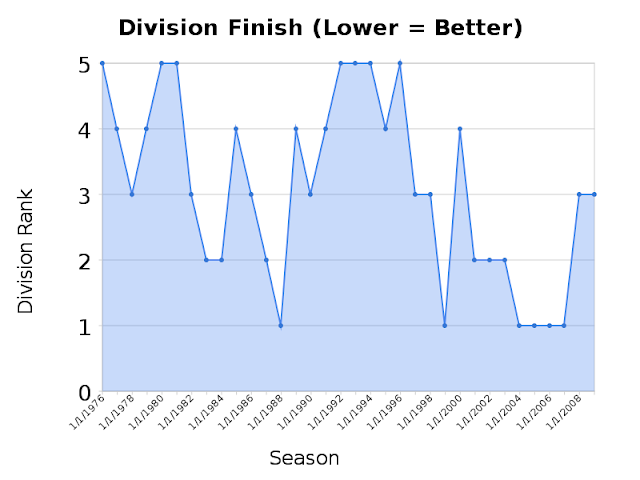 Starting with Holmgren’s first season in 1999, the Seahawks finished 1st or 2nd in their division 8 of his first 9 seasons. Even if you include his last season in 2008 when the Seahawks finished in 3rd place, their average division finish was 1.8. Seven of those 10 seasons included winning records, including a franchise best 13 in 2005 that accompanied the Seahawks only Super Bowl appearance. After the move back to the NFC West in 2002 (some may forget that the Seahawks played as part of the NFC West in 1976), the Seahawks average division finish was 1.3, and their average number of victories was 8.9. Chuck Knox faced far stiffer competition in the AFC West. Even during their 12-win season in 1984, they finished 2nd in the division. Knox won one division title in 1988, but it was with a 9-win team that certainly was not his best.

Through it all, the Seahawks average a 3rd place division finish and 7.5 wins per season. The Seahawks have finished in the middle (not last or first) in 21 of 35 seasons. Mediocrity reigns supreme.

Pete Carroll inherits a franchise that has fielded its two worst teams since that dismal 1992 campaign. Whether you look at wins or point differential, this team has been nasty. The 1992 team at least had the defensive player of the year in Cortez Kennedy, and a young defensive line that became one of the NFL’s best in future seasons. The current Seahawks boast no such strength from which to build.

The offense has aged and production is way down. 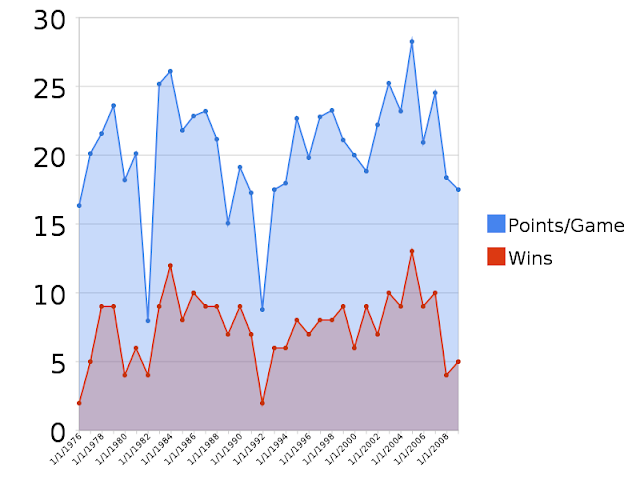 Scoring has dropped nearly 30% (24.56 points per game in 2007 to 17.5 in 2009) in three seasons. Thankfully, we haven’t approached the depths of 1992 scoring, but we also are unlikely to bounce back as well as the 1993 team did. There is no question that the best Seattle teams all could score points. To escape the pack, our offense needs to be scoring over 25 points/game. In fact, the Seahawks offense has averaged 25.7 points/game in our five seasons of getting 10+ wins. We need to score at least 20 points/game just to be competitive. In seasons where the Seahawks score less than 20 points/game, our average win total is 5.7, and we’ve been over .500 just twice. Nobody wants competitive, though. We want championships.

We have seen a similar slide on defense, where opponents are scoring almost 35% more per game than they were two seasons back. Scoring 30% less and giving up 35% more is not exactly a recipe for success. 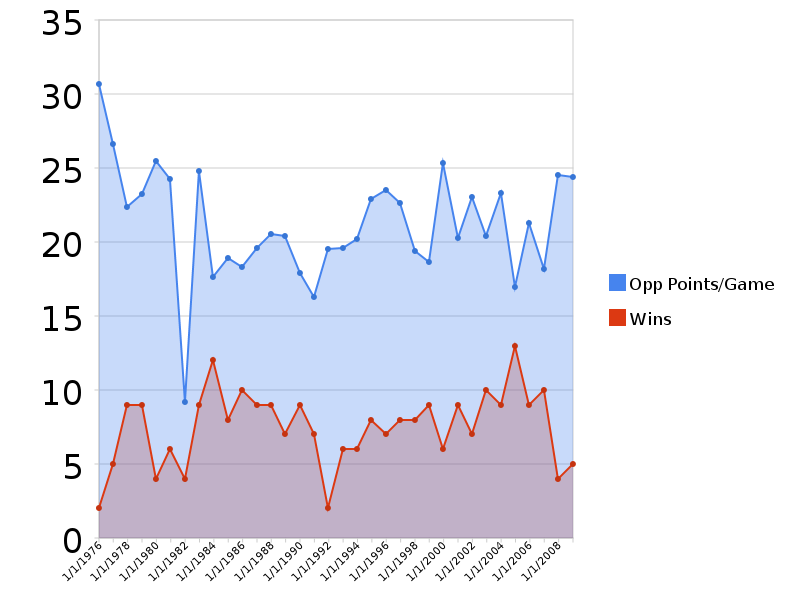 The Seahawks historically give up around 21 points/game. In all of their 10+ win seasons, they gave up less than that. Outside of 2003, when they gave up 20.44 points/game, all of their 10+ win seasons have featured a defense that gives up 18 points or less. Score 25+ and give up 18 or less. That’s the goal. We currently stand at 17.5 for offense and 24.4 for defense. Pete Carroll’s job will be judged by how quickly he can add 7.5 points to the offense and shave 6+ points off the defense, a 13.5 point swing. This could take a little while.

In part two of the season preview, I will start to focus in on the 2010 Seahawks.We will explore the off-season changes and the offense. The third, and final, section of the season preview will include a look at the defense, a glance around the division, and a game-by-game predicted record.